My Recommendations to Visit New Orleans

If you have put New Orleans on your bucket list and are in the planning phase, you want to know what should be on the top of your list? Here are my recommendations: 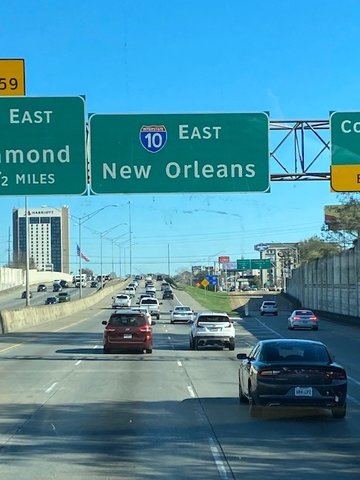 The RV Park we stayed in was within walking distance of the French Quarter hence the name French Quarter RV Resort. It is within walking distance of everything we wanted to see. We paid a pretty penny for our stay there. However, it was worth it overall. We could walk everywhere, enjoy the nightlife, and indulge in a few adult beverages without worrying about driving home. The RV Park does have all the accommodations you will need. There are washers and dryers, a swimming pool, and a hot tub. There is also a big cement wall with a locked gate and razor wire for extra security. 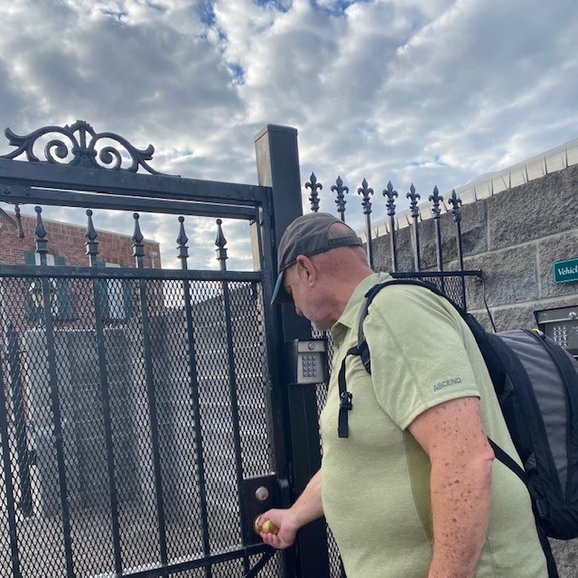 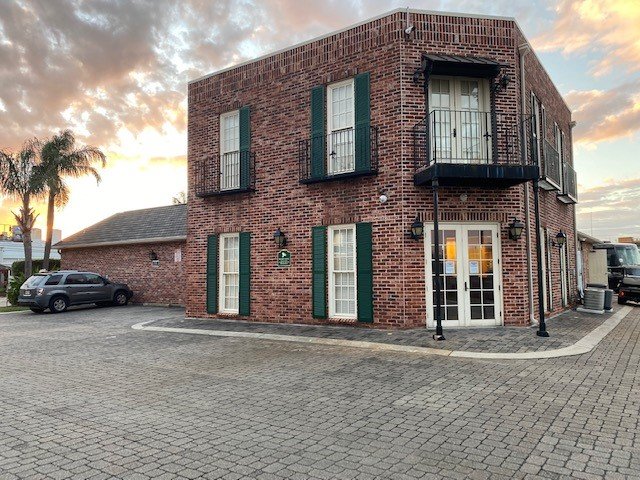 I highly suggest you try out the Hop-On-Hop-Off Bus. We were able to tour the entire city. I highly recommend doing this for any large city you visit. It allows you not only to see everything, but you can hear the history, and they will also point out all the "hot spots" such as shopping and restaurants along with nightlife for you to experience.

As you listen to the narration, you can take pictures and note places that you would love to explore further. This city has so much to offer. It is an individual choice for what you want to see and experience. Also, while on the bus, I suggest that you hop off on Magazine Street for lunch. This street is known for its restaurants and shops. Make sure you bring a little extra cash with you in case you see something you can't live without.

I suggest Bourbon Street. This famous street will not disappoint. It usually doesn't wake up until later in the afternoon, so getting a late start would not be bad. We ate at a cute little restaurant in the heart of it all called Olde N'ALWINS COOKERY. We ordered a beer, crabcakes, and a bowl of Gumbo. It was terrific, and Bourbon Street was an experience. You can't come to New Orleans and not see the famous street for being the heart of the French Quarter. This street is a never-ending party; things quiet down a bit during the day, but as night sets in, so does the excitement and entertainment. 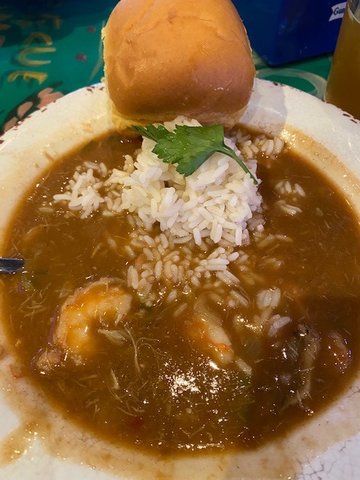 The houses that line the streets in the French Quarter are so adorable I would have given my right arm to be able to peek inside. They have so much personality, and their bright colors and Caribbean influences just made it so charming. 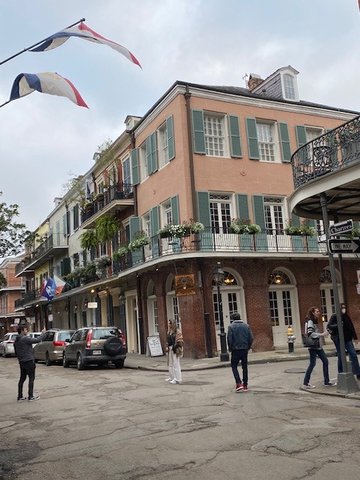 So what's it like to walk along Bourbon Street during the day? All the bars and restaurants are open; some are playing music, greeters are at the doors, you have Tarot Card readers set up on the street corners, some sitting right next to one another. They have their incense burning and their signs hanging off their table, wanting you to pay money to have them tell you a bit about yourself. Then as you walk a bit farther, you can have a gentleman standing on the street corner holding beads (Mardi Gras beads) trying to put them over your head so you will buy them from him so he can make a fast buck. You have performers sitting on the street playing drums on an empty bucket wanting money from the people that pass by. It's just an array of characters who are looking to make a buck. But keep in mind as the day goes on and the skies get darker, things on this street get weirder and just a bit crazy. But along with all the characters that surround you, there will be smells of old garbage from the night before; there is an aroma of weed, yes weed, marijuana, Mary Jane, whatever name you want to call it, it's very potent on Bourbon Street. So, if you have ever been called a prude, or you have a tough time letting your "hair down," Bourbon Street is probably not for you.

I recommend the World War II Museum. This museum was a very well done, fascinating memorial. Just so we are very clear, I am far from a history buff, but as I was walking through reading all the boards and watching all the videos, it took me back to high school and my history class that I only paid enough attention to pass the tests. Now I wish I had paid more attention because this stuff was intriguing. It took us about 2 hours from start to finish, and when we finished, we had lunch. 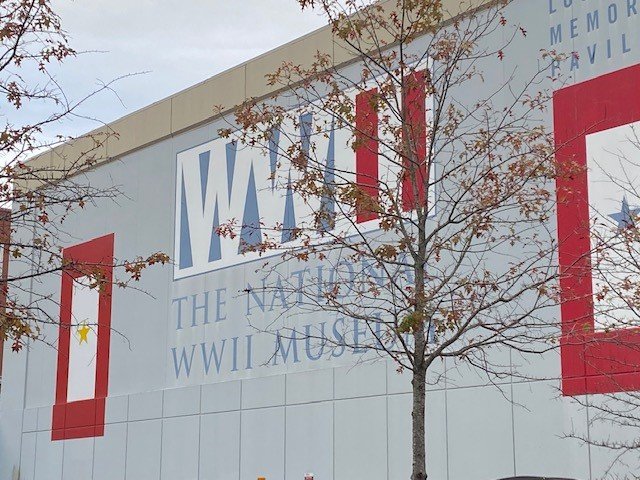 Some restaurants/eateries that I recommend near this Museum are Auction House Market. Auction House Market features a unique design, a multi-vendor food hall with an eclectic mix of chef-driven concepts. Have a coffee or a cocktail and enjoy breakfast, lunch, or dinner with their unique lineup. You will not be disappointed.

Another recommendation is the House of Blues that's just down the street. This place has food that will satisfy any appetite. While enjoying your meal, you can also listen to live music (check the schedule). It will give you the ambiance you have been yearning for while visiting this fantastic city.

After lunch, I highly recommend moseying on over the Jackson Square. This square is a very historic part of town. This was not only where public executions took place back in the 18th early 19th century, but this was the site of the Louisiana Purchase. The square was renamed in honor of the hero of the 1815 Battle of New Orleans, Major General Andrew Jackson. After Jackson, led by a force of 4,500 army regulars, frontier militiamen, free African Americans, enslaved people, city aristocrats. You will see beautiful architecture, but you can also enjoy some of the city's street performers, which is a treat. 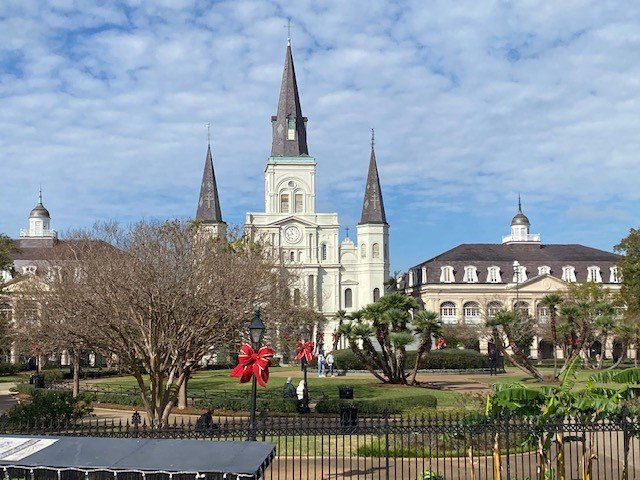 Experiencing the nightlife in NOLA can be fun, exciting, and a little bit edgy if you don't know where you are going. You do have the option to hang out on Bourbon Street, but things can get wild. So, if you are looking for something more low-key but exciting and a ton of nightlife, you might want to venture over to Frenchman Street.

Frenchman Street is best known for the three-block section in the Faubourg Marigny neighborhood, home to some of the city's famous live music. I promise you, and you will not be disappointed. Things started to liven up around 7:00 pm, but we showed up around 4:30 to ensure we were front and center.

The first bar I suggest popping into is The Maison. We listened to a small group of guys play some Jazz, and we ordered a beer and some snacks. They were lovely to listen to; however, the bar next door was louder and sounded much more exciting, so after finishing, that's where we headed. 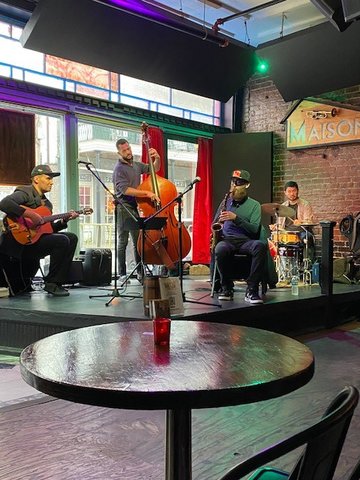 We headed to Bamboulas; it was a casual Caribbean-Creole fare with eclectic live music. We listened to a band called Les Getrex N. Creole Cooking; they were terrific. Their music was a mix of Motown-Jazz-Blues. You will be in for a huge treat if you can partake in their performance.

You can do a Plantation Tour which I recommend doing Oak Alley Plantation, located in Vacherie, Louisiana. They have a tour bus that will pick you up at your hotel or campground.
There is also another tour that is highly recommended is the Swamp Tour. There is so much to learn and hear about the swamps that engulf this State's lower terrain.
You can do both on the same day if you book them through this tour company: LouisianaSwamp

There is so much to do and see in this city. A full five days will allow you time to see many of the exciting places that New Orleans is known for. Take your time, enjoy it and be safe.
If you have any questions, please feel free to drop them in the comments, and I will do my best to get back to you ASAP.

Hello- My husband and I are currently traveling the USA in our Motorhome along with our dog Izzy. We started in March - 2020 and have visited 24 states. I like to give travel tips on where to stay, what to do and places to eat. I also like to give wine tips as we do frequent wineries along the way! Follow me on Instagram or Twitter for more. My blog is up, please follow me there also! 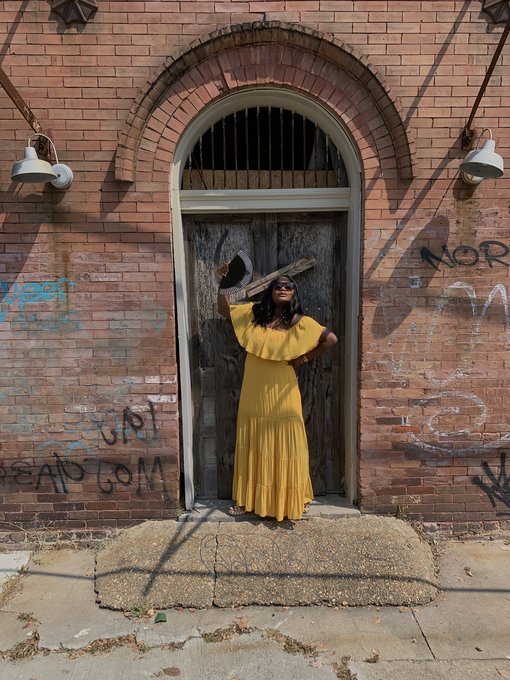 The Big Easy: Where to Eat, Explore, and Enjoy in New Orleans