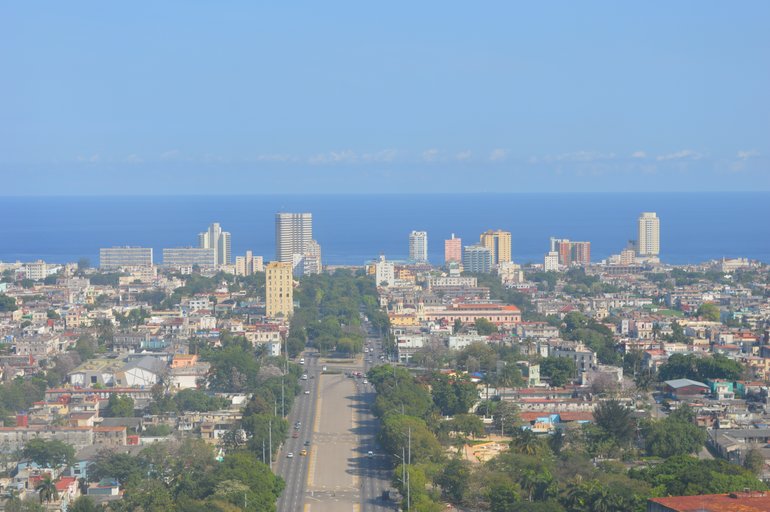 In 1842, Gaspar-Félix de Tournachon, (who passed to history with the pseudonym Nadar) had the audacity to ascend eighty meters in a hot air balloon and took photos of the charming French rooftops of the Petit-Bicêtre village and thus created aerial photograph.
The human being has built towers to rise from the ground and see the globality of that plane that he leaves behind. So rising up and looking from above is a magical procedure. One of the best ways to know the city in depth is from above, as it allows you to have an unparalleled perspective of a city in a single movement and learn about its history and the most interesting sites through its architecture.

Definitely, seeing the cities "from the heights" is quite special, because it causes a feeling of immensity derived from practically observing the world at your feet. Thanks to the buildings and skyscrapers that exist in these cities, the photos from a new aerial perspective are becoming fashionable.
How many of these cities have you visited? Maybe you have visited Dubai and observed the city from the highest skyscraper in the world, the Burj Khalifa, or you've appreciated Athens from the Accropolis, Shanghai from the skyline, Frankfurt from Kaufhof Galleries, London from the London Eye, New York ,The city that never sleeps, from Rockefeller Center, or Paris, The city of love, from the steps of the Basilica of the Sacred Heart, in Montmartre or Rome from the Monument to Vittorio Emanuele II.
Do you like this new perspective of photographing big cities? Even if you are an inveterate traveller and you collect photos of the most important and most visited cities in the world, if your collection is missing Havana, is not yet complete. We suggest that your first approach to Havana must be done from the highest point of the city, which is the viewpoint located at the top of the José Martí Memorial from which you will have a living architecture model of Havana at your feet. 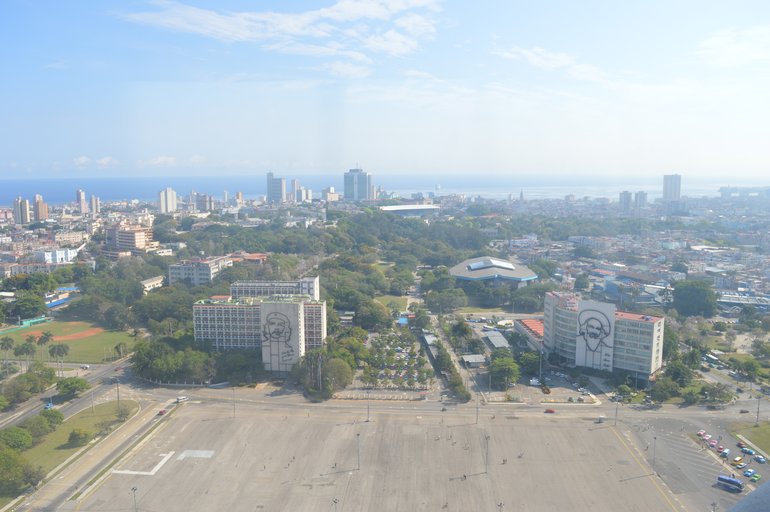 From the viewpoint of the José Martí memorial you can see in a radius up to 50 kilometers emblematic buildings of the city that are notable examples of various architectural styles such as the Morro Fortress and La Cabaña, the brutalist building of the American Embassy , the Focsa Housing building, The National, Habana Libre, Cohiba, Riviera and Capri Hotels, the Latin American Stadium, the dome of the Sports City, the central chapel of the Colon Cemetery, the Cuban Art Factory, the Karl Marx theater, The National Theater that is part of the set of buildings of the modern architecture movement and is located in Revolutión Square and surrounds the viewpoint. You'll also be able to appreciate the Bay of Havana, the beautiful malecon , among many other attractions. You will also be able to observe the coconut taxis and a parade of the multicolored vintage cars (Almendrones). 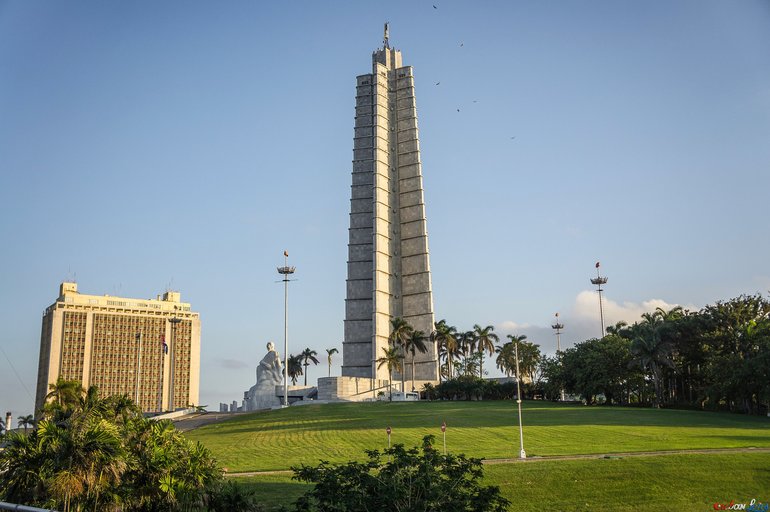 We invite you to rise 142 meters above sea level, and visit the highest point in Havana at the Mirador located on the top floor of the José Martí Memorial. Like all the monuments, It was built with the shape of a star. The Mirador also has five points that constitute observation galleries, finishing the entire structure is a small roof terrace. The viewpoint has access through a small interior elevator with a 90-meter route or through a helical staircase with 579 steps. On the floor of the viewpoint, a compass rose allows geographical orientation and measures the distance in kilometers in a straight line that exist between the monument and the capitals of 43 countries, as well as the distance to the former 6 provinces of Cuba and the site where José Martí died in Dos Rios. 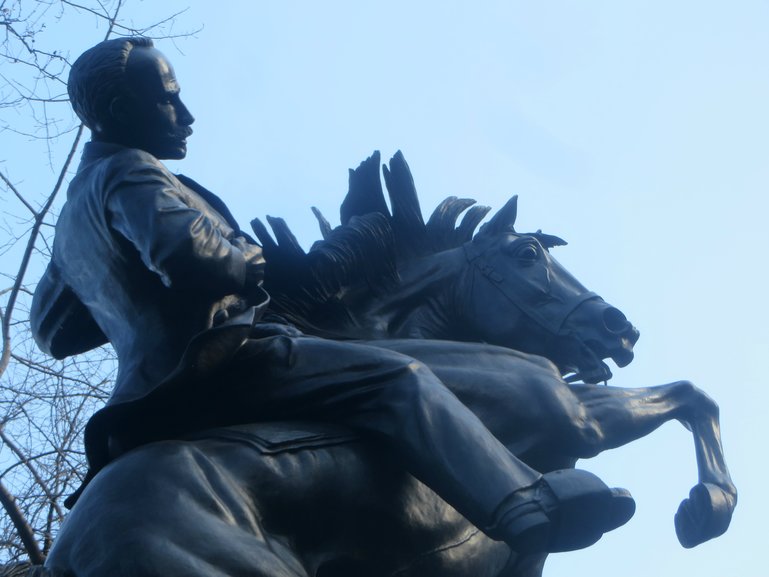 The Jose Martí Memorial Is located at The Revolution Square on the Catalanes Plateau, a place that the French landscape architect Jean Claude Nicolas Forestier had pointed out in 1926, during his visit to Havana, as the ideal place to become the Civic Center of Havana. This important architect participated in the preparation of the regulatory plan for knowing Havana history and in the building of the Fraternity Park and the René Fraga Moreno Park in Matanzas Province. 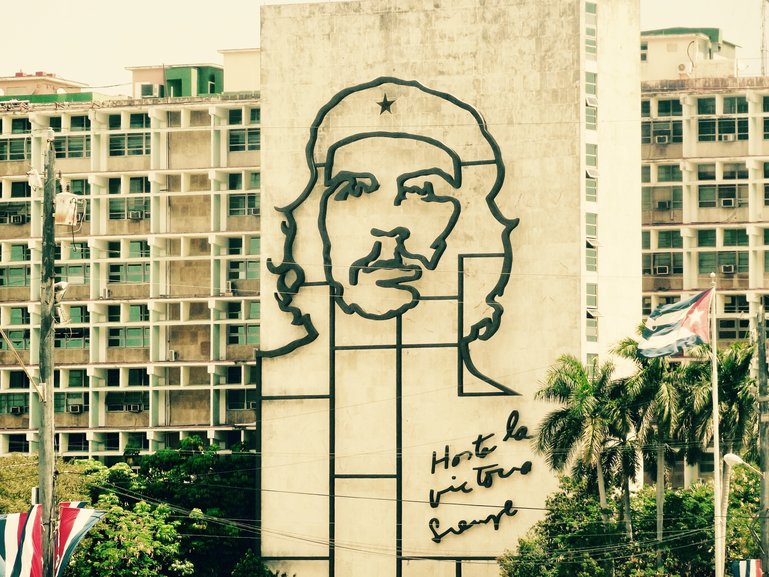 The Revolution Square has 72 thousand square meters and is the largest in Cuba and one of the largest in the world. It's surrounded by modernist and monumental buildings such as the José Martí National Library, the National Theater and also it's surrounded by government institution buildings such the Ministry of Defense buildings, the Palace of the Revolution, headquarters of the State Council, the Ministry of the Interior buildings with the well-known image of Che Guevara, a photo taken by photographer Alberto Korda, and the headquarters of the building of the Ministry of Communications with the image of Camilo Cienfuegos. Both sculptural reliefs were executed with the same technical specifications by Enrique Ávila artist. 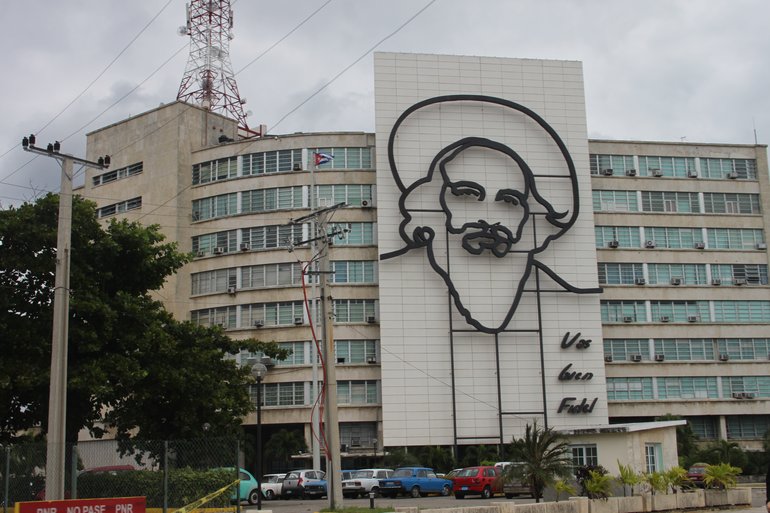 So why don't you add a visit to this viewpoint in your travel plan to Havana?

The Revolution Square, One of The Most Instagrammable Places in Havana

The World of Fusterlandia in Havana, Cuba