The Revolution Square, One of The Most Instagrammable Places in Havana

The José Martí Memorial is the largest monument built to the memory of the National Hero of Cuba, José Martí. Inside its base, a museum was created, it contains the history of this figure. Located in Revolution Square José Martí Memorial viewpoint is considered the highest geographical point in Havana. 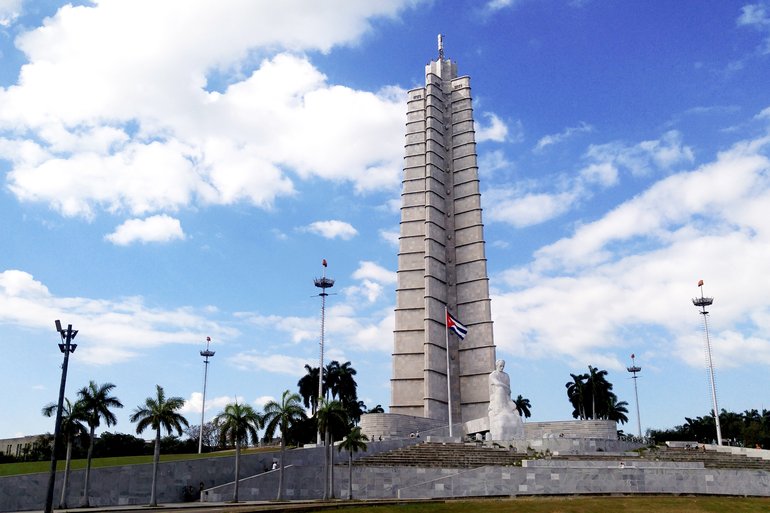 The monumental complex began to be built in 1953, on the centenary of José Martí's birth, and was financed with popular collection contributions. It was built in five years. Today it's a reference site for the city and Cuba, ideal for learning about the history of the country and to discover and rediscover Havana in a better way. The Revolution Square is a public square in Havana City and one of the largest squares in the world with 72,000 square meters. The genesis of this square dates from the first quarter of the 20th century when an urbanization plan was drawn up for the Cuban capital that would have as its nucleus a civic center where a monument to the greatest of all Cubans would be erected. 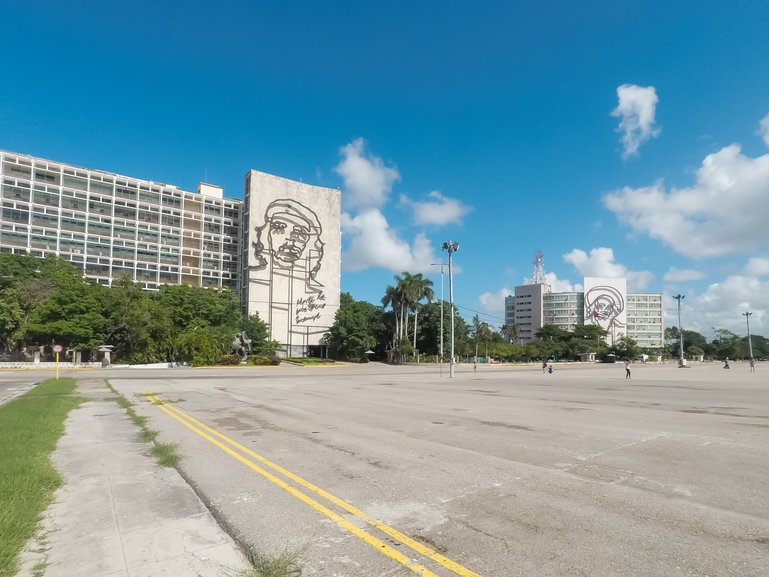 The location chosen for this civic center was the plateau of the Catalans, 42 meters above sea level, it's located between the main urbanizations of the time: El Vedado and Nuevo Vedado, El Cerro, Marianao and Centro Habana. This location would constitute the geographic center of the city according to the urban planning proposed for Havana by the notable French architect, urban planner and landscaper Jean Claude Nicolas Forestier. 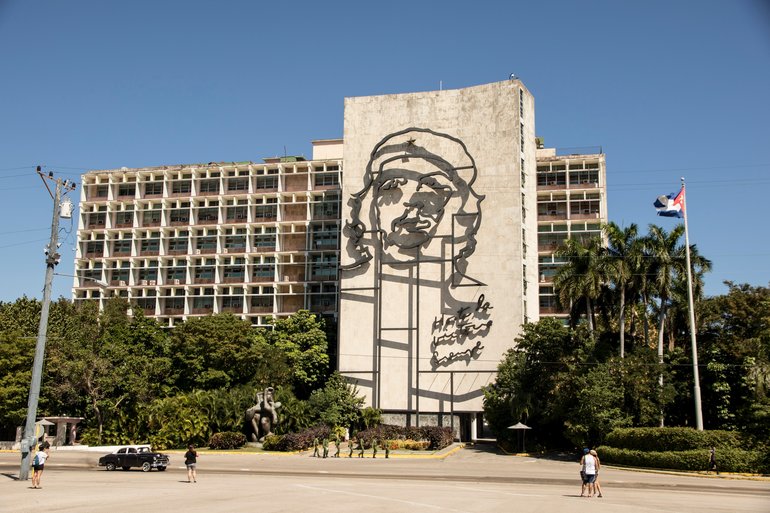 The Square was originally named Civic Square, although its international fame starts with Cuban Revolution. Just in it we can find the Monument to José Martí sculpted by Juan José Sicre. The Ministry of the Interior Is infront of it, with the well-known image of Che Guevara taken by the photographer Alberto Korda made as a sculptural relief, by Enrique Ávila artist. In 2009, this work was developed by the same artist and with technical specifications with the imagen of Camilo Cienfuegos at the headquarters of the Ministry of Communications. Around this square there are other important buildings such as the José Martí National Library, the National Theater, The Ministry of Defense and the State Council building. a The national bus Station is very closed to this area and the Viazul bus Station Is inside of it. 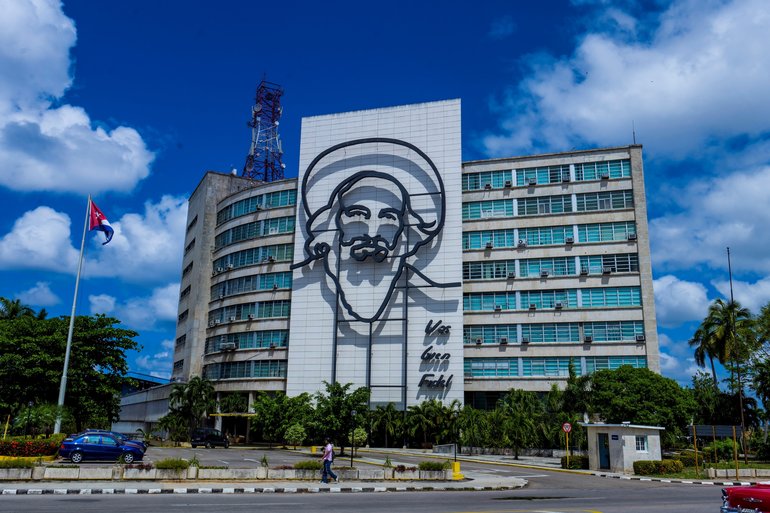 Camilo Cienfuegos at the headquarters of the Ministry of Communications.

The José Martí Memorial is made of a base with the shape of a five-pointed star (as a symbol of freedom and independence) and a central tower. On the base, the museum Is located, and the rooms are in every five points of the star; the central area has a radius of 20.00 m and it's limit is formed by a colonnade of 25 circular columns.The central core of the tower with the shape of a regular prism with a 5-pointed star base is in the center of the Museum and therefore in the entire basement.Otherwise, the basement's roof forms the lower terrace of the memorial and allows the access to the visitors. 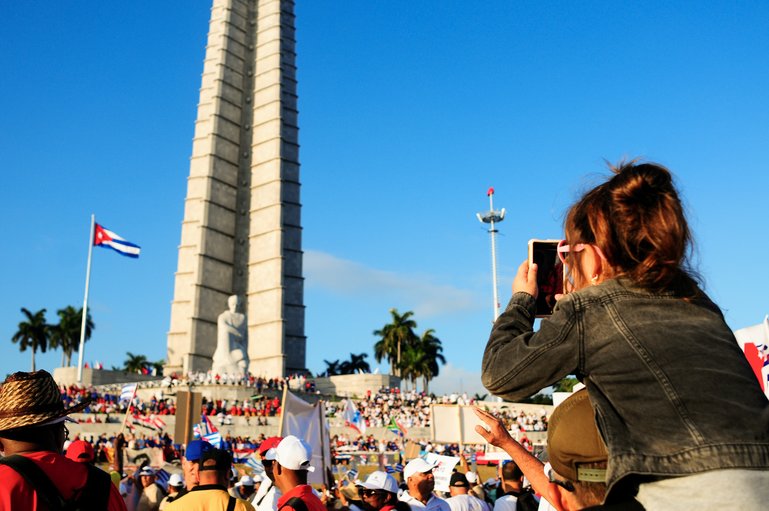 The statue's platform is used as a platform and tribune during political demonstrations.

The tower with the shape of a truncated pyramid rises from the lower terrace and it' s made of 22 blocks or similar steps, whose heights and bases decrease with height. The tower also has a five-vertex star-shape and reaches a height of 112.75 meters to the tower' s top cap and 141.995 meters to the lighthouses and flags. The entire structure is lined with siboney gray marble slabs, extracted from quarries near The Abra on the Isle of Pines, nowdays the Isle of Youth, the place where Martí began his exile during his adolescence.

The pyramid has an internal elevator of 90 meters of travel and a staircase of 579 steps that allows the access to the upper part which is also star-shaped. the Highest viewpoint in Cuba Is there and from its balconies, visitors can see Havana in all its magnitude. The viewpoint has also five points: these are observation galleries, on viewpoint's floor a compass rose allows geographical orientation and it measures in kilometers and in a straight line, the distance between the monument and the capitals of 43 countries, as well as the distance to the old 6 provinces of Cuba and the site where José Martí died in Dos Rios. 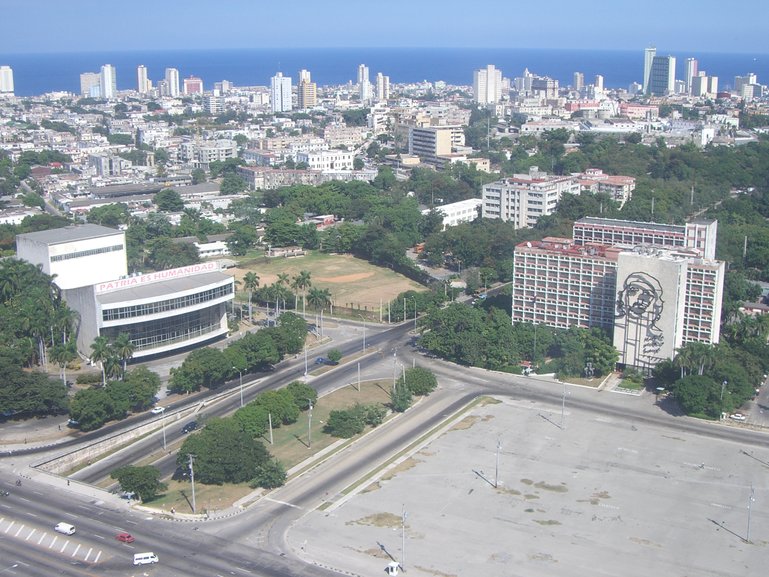 From the northeast of the Memorial, Jose Martí' statue can be seen, from the ground floor and from the outside of the monumental complex, It can also be seen and it's seated like Rodin's thinker, it was sculpted in white marble, at the foot of the tower by Juan José Sicre, between on October 15, 1956 and on August 15, 1958. It is made up of 52 pieces of marble and has a height of 18.00 m. The head was carved from a 3.00 x 2.00 x 2.00 m block weighing approximately 18 tons. 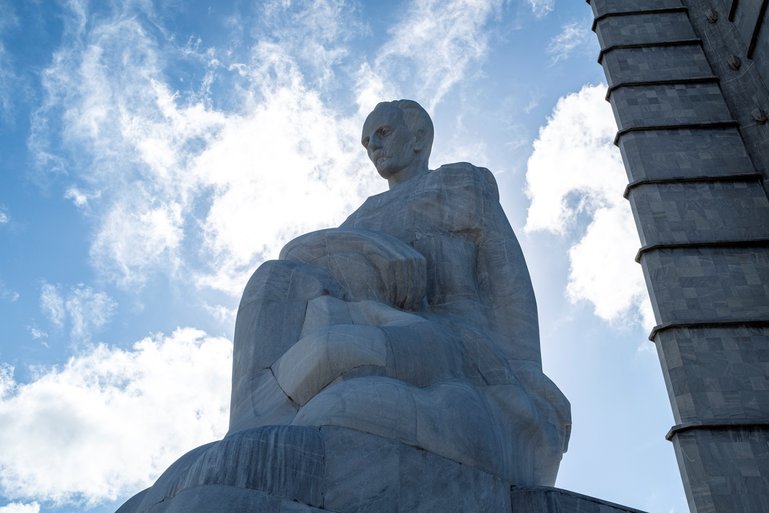 There are six pillars infront of the statue representing each of the 6 provinces existing at that time. Inside each one, there' s a reflector that lights up the image of the Apostle in an appropriate way to make it stands out at night. The statue's platform is used as a platform and tribune during political demonstrations.

The José Martí Museum located at the base of the memorial, is one of the emblematic sites of Cuba in terms of the compilation of texts and personal history of the most universal among Cubans. The Museum was inaugurated by Cuban President Fidel Castro on January 27, 1996. Facing the entrance to the Memorial, on its ground floor, escorted by a Cuban landscape, the Cespedes flag and the national ensign, the bust of José Martí can be seen. It was the work of the sculptor Jilma Madera, a cuban artist who also made one of the ten highest Christs in the world, the Christ located at the entrance of Havana Bay. 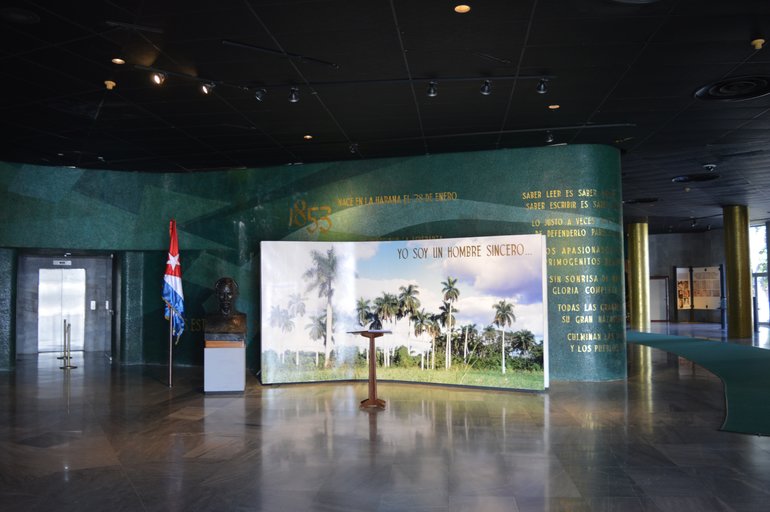 it also treasures different works of great heritage value. Just to mention one example: the 861 m² Venetian ceramic mural made by Enrique Caravia Montenegro, one of the largest indoor murals in existence. This mural and the 89 thoughts of our National Hero rolled in 22 carat gold and surrounded by 25 columns also rolled in gold, are one of the main attractions of the Institution.

The museum has five rooms: one at each end of the star, four rooms are for exhibitions, three of them are permanent and one is provisional, the room that's left to mention remains for events.

The first room offers a vision of Martí man, within his family and social environment and his pilgrimage around the world. It covers from his birth until his participation in 1891 at the Monetary Conference in the United States. This space has a mural that shows an engraving of Havana in the 19th century.

The second room shows the work of Martí in the preparation of the Necessary War, the 1895 last great War for the independence of Cuba from Spanish colonialism. It contains copies of the Patria newspaper, the bases and statutes of the Cuban Revolutionary Party, photos of José Martí with Cuban emigration in the US, mainly from Tampa and Key West; a photo of a shooting practice, maps that offer us all the activity of Martí in function of joining wills for the preparation of war and the document signed by José Martí and Máximo Gómez known as the Montecristi Manifesto, program of the war.

The third room is devoted to the history of the Monument and the Plaza' s building, as well as the most important events that have occurred in it. This room is presided over by a gigantography of the Loma de los Catalanes, place, where this monument remains.

The fourth point of the star is the auditorium. This place has multiple purposes. There the visitor can enjoy small-format concerts, videos, children's activities, conferences on various topics, book presentations, as well as presentations by important personalities of Cuban and universal culture.
And the provisional Exhibition Hall, fifth point of the star, whose main objective Is to contribute to the extension of the best of national and international art through the exhibition of various visual works.

A specialized staff welcomes visitors to the Memorial, it treasures Martí's personal belongings. Drawings, engravings, iconography, his books' editions and objects related to his life, are exhibited in the space, among them the degrees of Bachelor of Philosophy and Letters and Law issued by the Spanish University of Zaragoza; a stuffed Quetzal given to the Cuban in 1877 by the president of Guatemala, Justo Rufino Barrios; and the first letter written to his mother Leonor Pérez by the patriot when he was just nine years old. In this exhibition, the suit that Martí wore on the day of his death in Dos Ríos, his two weapons: a Winchester rifle and a Colt revolver, the latter a gift from Panchito Gómez Toro, son of Generalissimo Máximo Gómez, and the note that Martí left to Generalissimo Máximo Gómez hours before his fall in combat in Dos Ríos are highlighted. 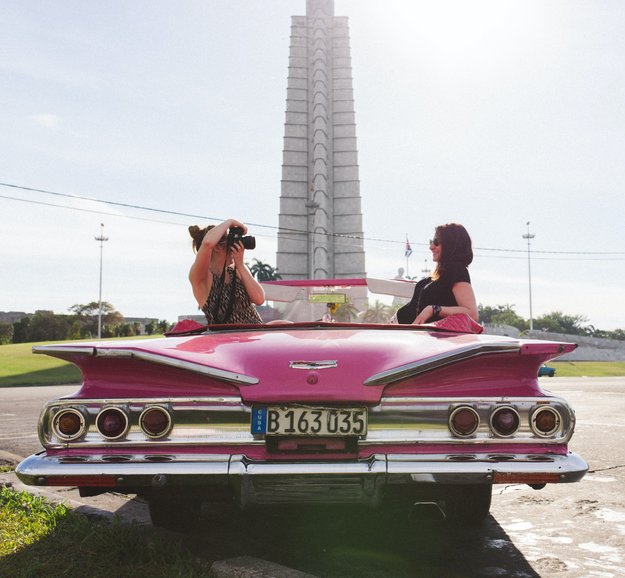 One of the most instagrammable places in Havana

Visitors from all over the world come to one of the most emblematic places in Havana. Cubans also see the José Martí Memorial as a symbol of national history, that' s why they always return to the institution to remember our Apostle of independence, and also to appreciate from its highest point, the city where he was born.