Have you ever heard of Georgia? No, not the US state. We’re talking about the country. The Georgia that is seemingly in the middle of nowhere. A former Soviet state, a country that is located at the intersection of Europe and Asia, and a country that is filled with a unique cultural history. There is so much to see and learn in Georgia. Now is a perfect time to visit this country, because unlike most of Europe and Asia, it is not overrun by tourism and still has a very authentic culture. 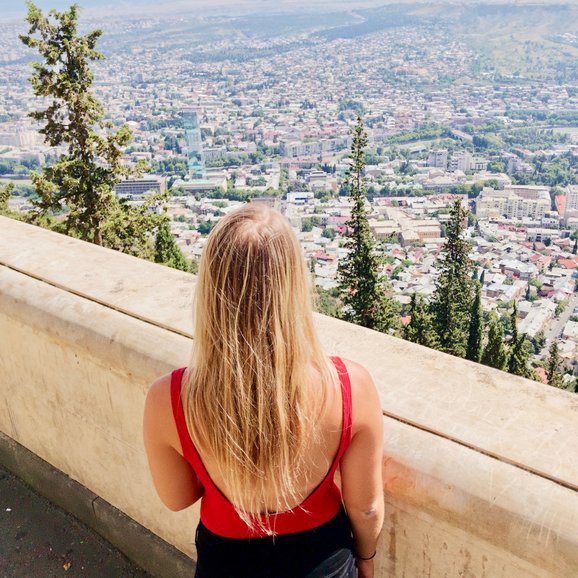 You are probably wondering, “How on Earth did you decide to visit this place?”

I saw photos of Georgia on a favorite travel Instagram account and added it to my must-visit list. I had been traveling through Europe for a month to places like Paris, Santorini, Florence, Venice, Lisbon, and more. All of these are incredible destinations, but they are insanely crowded in the summer! I wanted to visit somewhere off the beaten path for a change, and Georgia was the first place to come to mind.

Our visit to Tbilisi began with an interesting start. We were taken to our cabin tucked away on a hill with a beautiful view of the city via a private airport transfer. This sounded wonderful, until we realized he did not speak a word of English and barely knew where to take us. We were dropped off at a seemingly random spot, then realized this was our cabin. We snuck in a back gate that likely needed some repairs and successfully retrieved the key from a neighbor. Although I was unsure at first, the house turned out to be beautiful and newly renovated, with such a great view, and only a few spider friends.

We explored the characteristic winding streets of Tbilisi, noting the strong Soviet remnants. Everywhere you turn in Tbilisi is a new adventure. From the virtually free street popcorn, to stray dogs walking around just like citizens, to the street markets, all four days here were full of new experiences.

The food was out of this world, and not to mention, it was a great value. We couldn’t get enough of the cheesy bread served all around town. We went to restaurants such as Barbarestan, which is one of the nicest, most historical, and most authentic restaurants in town. We also visited Sofia Melnikovas, one of Anthony Bourdain’s spots, and enjoyed dinner in the tucked away courtyard. We ate staple Georgian dishes such as khinkali, kharcho, veal, and many, many more.

We visited an antique market and found the most interesting old photos, currencies, trinkets, and war memorabilia. The nearby food market was full of smells and the most random items. 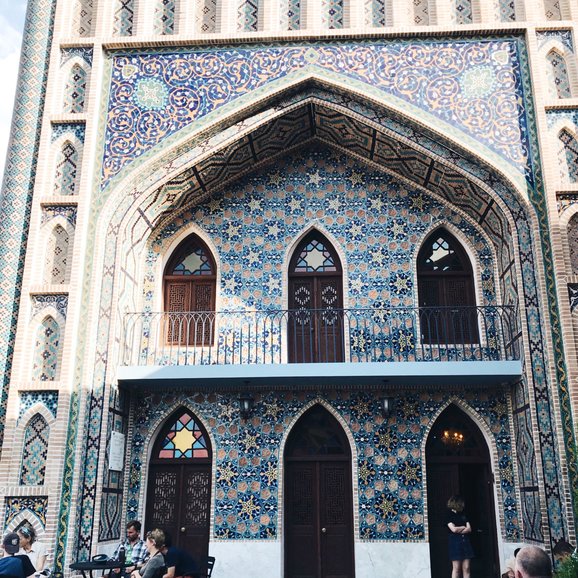 Tbilisi is also home to natural Sulphur baths. We visited the Orbeliani Baths and rented out a private bath room with a warm bath, cold bath, sauna, and shower. The bath house was old, but so ornate. The outside was absolutely beautiful. The inside smelled strikingly similar to rotting eggs, but the Sulphur water helped cure the aches and pains resulting from over a month straight of traveling.

You can’t miss out on the best view in the whole city from Mtatsminda Park. Tbilisi Funicular takes you to the top of the mountain where you can overlook the whole city, full of life and color. Tbilisi undoubtedly has a personality of its own.

There is so much to do and see in Tbilisi that I could go on forever. Although I’d like to, it would be a shame not to mention the incredible places outside of Tbilisi to visit. I 100% recommend renting a car in advance when visiting Tbilisi. The day trips made our experience in Tbilisi into an even more incredible adventure.

The countrysides of Georgia are a must-see. There are a lot of fun places to stop along your route to wherever you go - such as an old bus turned into a roadside cafe with delicious Georgian iced coffee. From here, you can sit outside and watch farmers herd cows across the road while stopping traffic for 10 minutes to do so.

These are some of my favorite spots near Tbilisi… 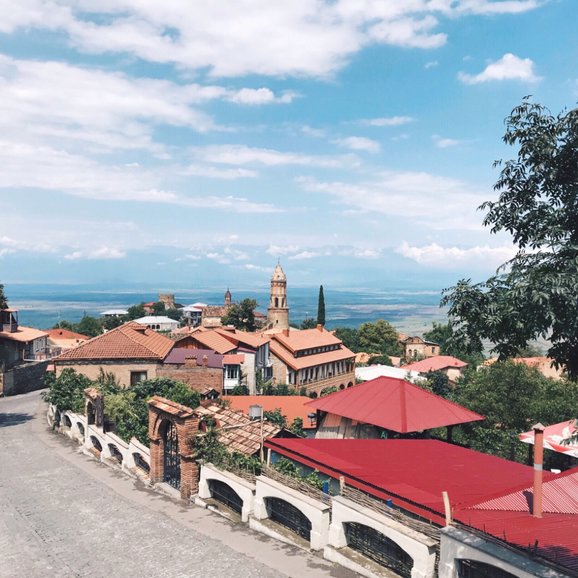 Georgia is known for inventing wine – it is the oldest wine making country in the world. We went to wine tastings in both Tbilisi and Sighnaghi, a Georgian wine town. The wine was distinctly different from the French, Italian, and Californian wines we are used to. In Georgia, most of the wines are made by fermenting grapes in a clay pot under the ground, called qvevri, instead of wooden barrels. This gives the wine a thicker feel and a taste that could be described as deep amber. We tried some great wines, and we also tried some well, shocking, wines. Wine in Georgia is like opening a mystery box and finding a random flavor, which makes it even more of an enjoyable experience.

Sighnaghi had beautiful wine tasting rooms, restaurants, and shops. It also boasted some of the most incredible views. Sighnaghi is a serene village up in the clouds, overlooking flat lands that seem to go on to infinity. 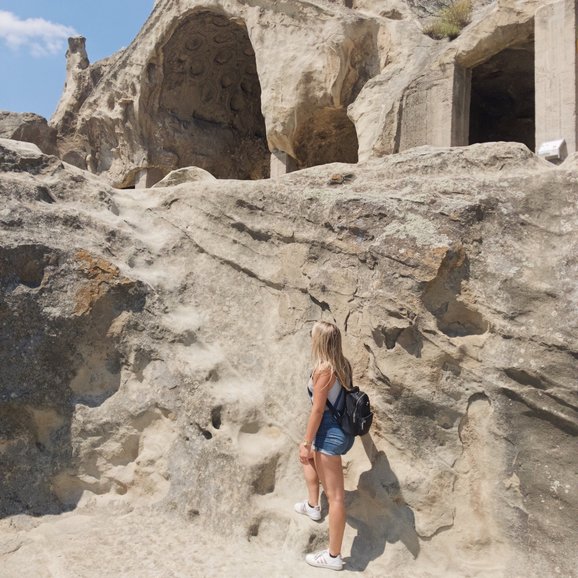 Georgia’s infamous cave towns are one of the main reasons I wanted to visit the country. Uplistsikhe, or Lord’s Fortress, is an easy day trip from Tbilisi. It is one of the oldest settlements in the country, dating back to the Bronze Age in 1000 BC. That is over 3000 years ago! This UNESCO site was an important religious, political, and cultural center during its time.

While walking around the town, I felt like I had been thrown into a time machine and taken back into the days that cities were just starting to form. The living quarters, big hall, and palace complex gave hints to what the people of Uplistsikhe’s lives were like. Surrounding the town was grassland and a river, providing a sense of curiosity about what was beyond this town, if you can imagine how people spent their whole lives here without leaving.

Gori is the birthplace of Stalin and home to the Stalin Museum. We visited Gori while on our trip to Uplistsikhe to get lunch and see the museum. It’s only about 10km from the cave town. We had some of the best food at a random hole-in-the-wall cafeteria where no one really spoke English. This is one of those situations where you just point at the menu and smile. The Stalin museum was really informative and provided insight to the way this country saw his reign versus what we learned in school in the US. We used the Google Translate app to read all of the information here because it was only written in Georgian and Russian, so make sure to have this handy if you visit! I personally love the challenge of a language barrier because it forces you outside of your comfort zone.

Georgia on My Mind

I reminisce on our visit to Georgia often. This country was directly in the middle of our trip through Europe and Asia and it was so special. One of the reasons I adore traveling is because I think it is the best possible learning and growing experiences you can have. You get into situations you never imagined and never would have otherwise. You learn so much about yourself and about the vast world around you. I love learning about culture and history, and how certain places became the way they are today.

If you are a traveler who loves a good adventure off the beaten path that is sure to change your life, then Georgia is waiting for you. 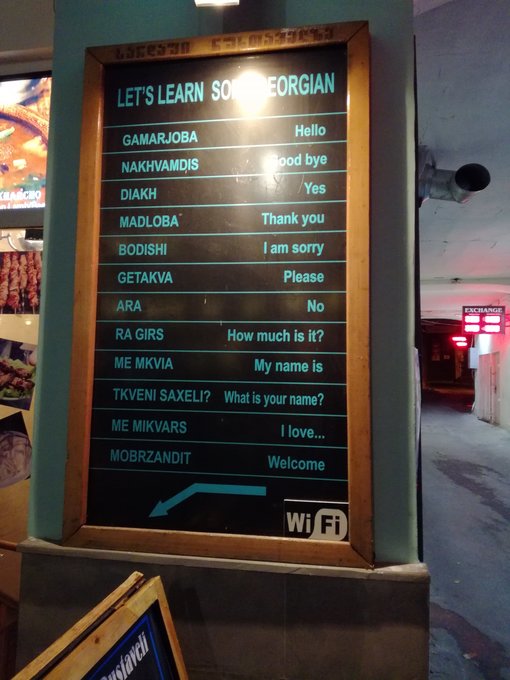 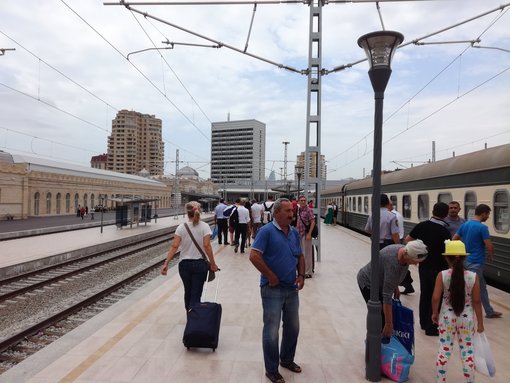 Crossing the Georgia-Azerbaijan border by train 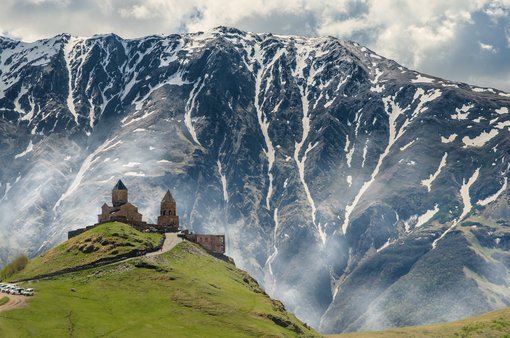 Why You Should Add Georgia to Your Bucket List

Have you ever wondered why so many people visit Georgia? - Go to Kazbegi and you'll find the answer. Mountains, snow, glaciers, ski resort, churches, castle and etc. Kazbegi has thes and much more to give. We provide a GUARANTEED DEPARTURE group day tour from Tbilisi to Kazbegi on every Tuesday. Take a call and join our tour to mountains.

On tour we walk on high hang bridges of Okatse canyon, take a boat ride through Martvili canyon and explore beautiful Prometheus cave. If you love nature and aren't afraid of walking this tour is for you.