Cradle of the Renaissance: Florence, Italy, 2015

To begin with, I had no idea about the beauty that was going to unravel. It was a short journey to Florence from Bologna. I arrived early in the morning as I had only a day to see Florence (please plan your trip much ahead if you have a tight schedule) and made the most of the capital of Tuscany. She boasts of her Renaissance beauty as we walk through the streets. You could walk around the city and visit places as it is quite a walking-friendly city but the best thing to do is to prioritize what you would like to see since Florence has many churches and museums. 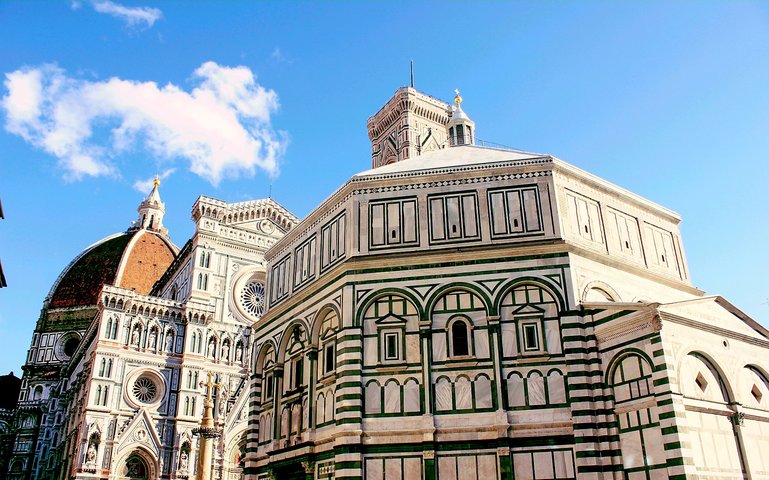 This cathedral owes its fame to its Dome. After being completed in the late 15th century, the dome of this cathedral was the largest in the world until the late 19th century. Its dome is still the largest brick and mortar dome in the world and she still remains an engineering marvel as it's a mystery to architects on how this was executed. On the other hand, when you take a stroll around the cathedral, there are these bronze doors, which are called the "Gates of Paradise". Although they are undoubtedly amazing, they are just replicas and you can see the real doors in the duomo museum where they are being conserved. 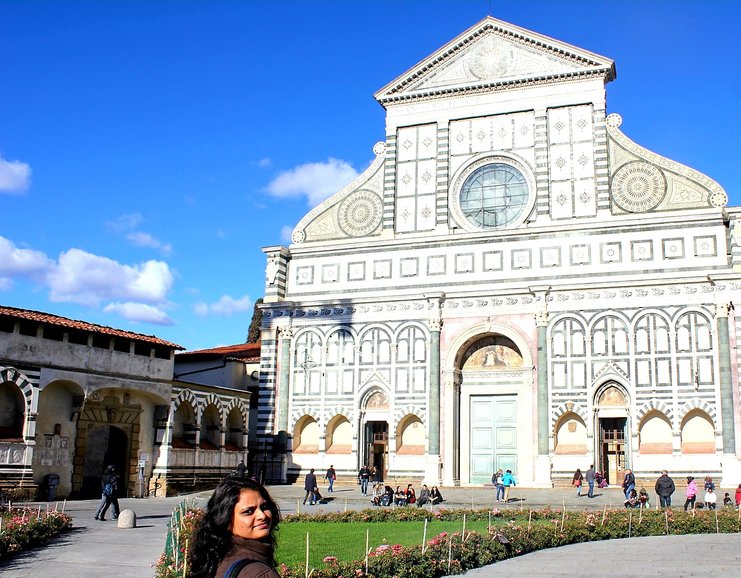 This church is pretty close to the train station and during the tourist season, its square or piazza is bustling with vendors and people. As we enter the church, we witnessed some of the finest pieces of art and one among them was three-dimensional paintings that make you wonder, how one could calculate and deliver a painting so accurately. Lift your head and be ready to be astonished by the art of Domenico Ghirlandaio, who painted them rapidly with watercolors on wet plaster so that the colors penetrate the plaster and remain there for a long long time to come. No wonder they built things to last back then. This kind of art form is called frescoes and the one in this cathedral are one of the best in Italy. Do not miss the masterpieces by Giotto and Lippi as you walk around. Once done with it, take a walk and enjoy the cloisters in the complex. 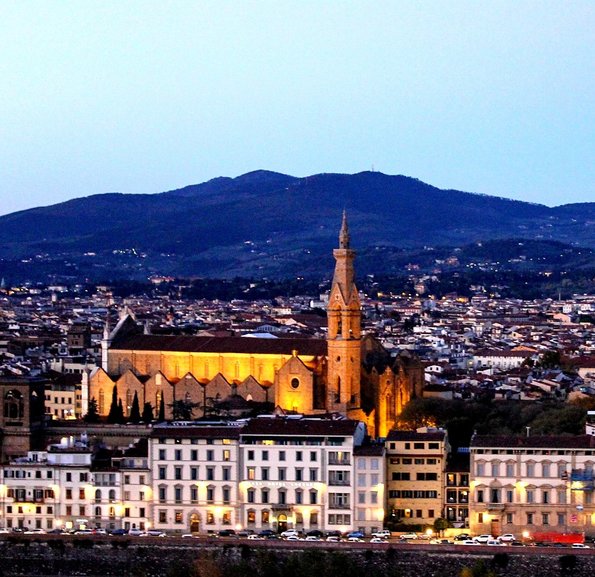 This is the one church you should not be missing out as this is where Florence's greats like Michelangelo, Machiavelli, Gallileo and Foscolo were buried. The church is highlighted with frescoes by Giotti and these are really some fine pieces of art. Do not forget the tomb of Giovanni Battista Niccolini that has a statue over it as an honour to him and a common belief is that, it was this statue that was an inspiration to the Statue of Liberty. 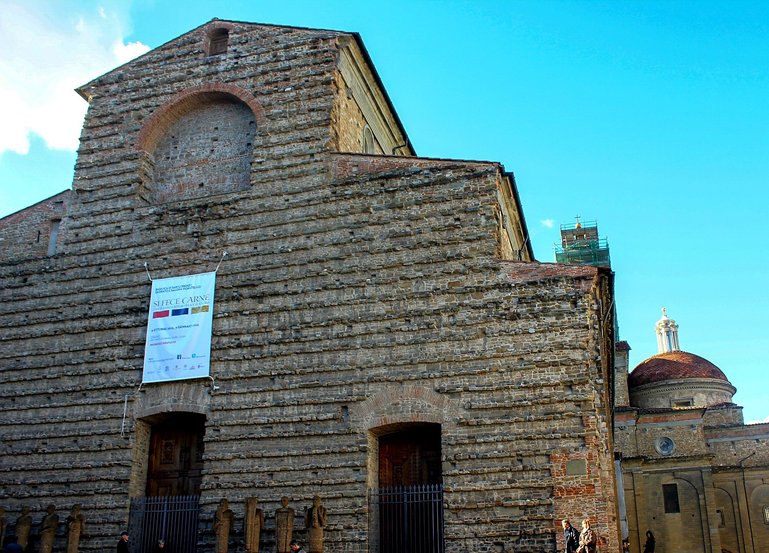 This basilica has the works of the finest artists during the renaissance era. It was designed by the same architect who designed the renowned Duomo, Filippo Brunelleschi. The building of this church was financed by the Medici family and the tombs of the Medici family designed by Michelangelo are in it. One of the finest works of Michelangelo can be witnessed here if you happen to visit the Medici Chapels. "Notte" or Night by Michelangelo is one of them and he explains the essence of sleep with this beautiful sculpture. 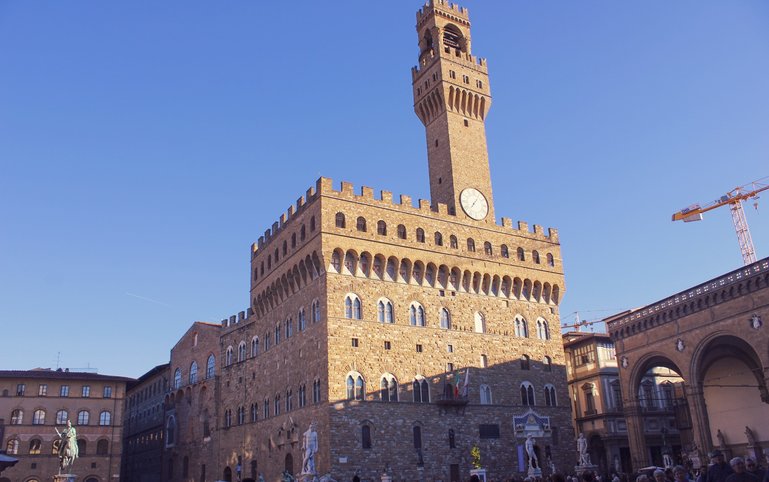 Piazza della Signoria is considered as the most famous square in Florence which is located just in front of the Palazzo Vecchio. The L-shaped square was named after Palazzo della Signoria or Palazzo Vecchio and is located halfway between Duomo and the River Arno. It is said to be the origin of the florentine republic and still manages to remain the political focus of the city. The square is most visited as it is filled with some famous renaissance sculptures, including the copy of Michelangelo's David. It also leads the way to the famous Loggia dei Lanzi, a 14th-century ceremonial building with wide arches, an open-air gallery of Renaissance sculpture, on the corner of Piazza della Signoria adjoining the Uffizi Gallery. For these reasons, the square is always filled with some talented street artists showing their talent to the visitors. I have managed to click some of the famous sculptures placed in Piazza della Signoria and a small clip of a street painting artist who was enjoying attracting the visitors of the square. 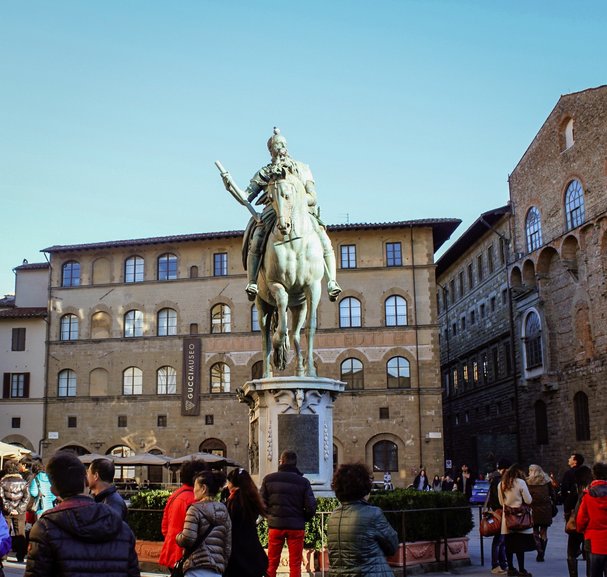 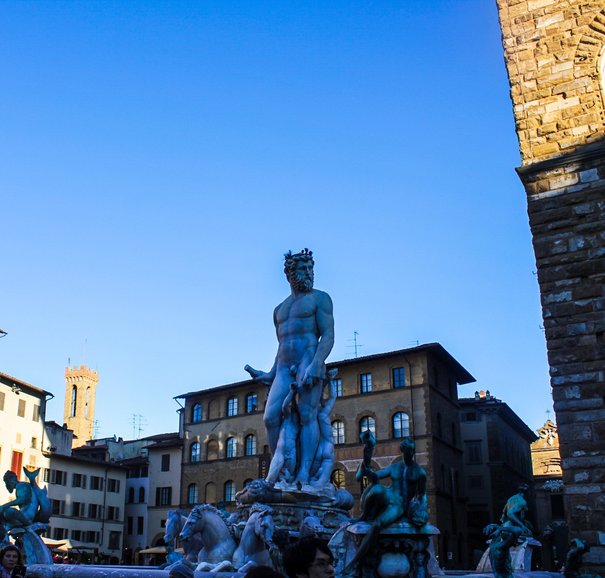 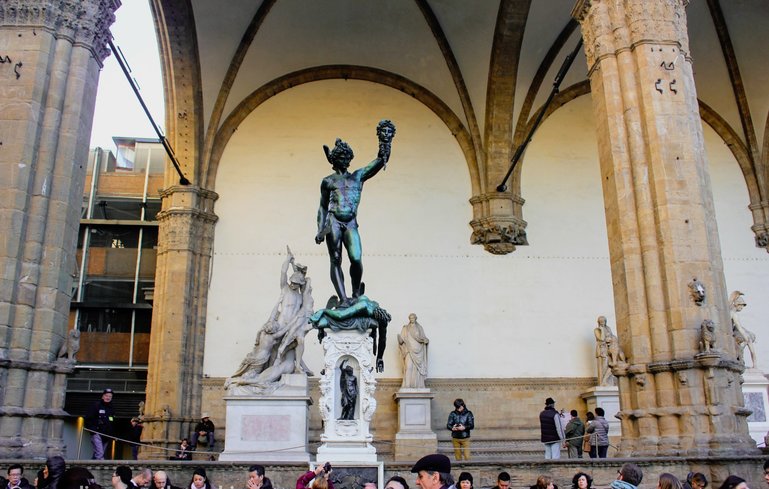 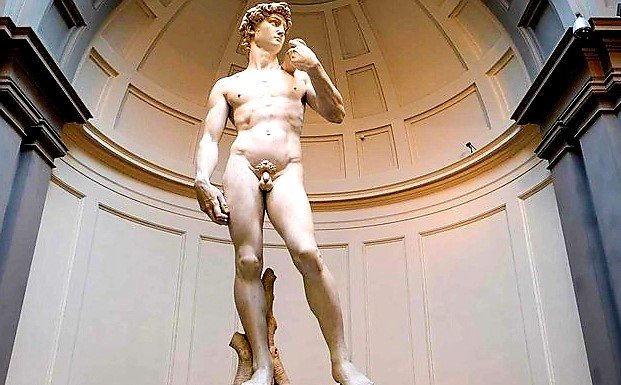 Do not get confused with the sculpture of David on Piazza Della Signoria, as it is a replica. Therefore you will have to visit the Galleria dell'Accademia to witness the real work of Michelangelo. Apart from this the museum also holds the unfinished works of Michelangelo. David by Michelangelo, Rape of the Sabine women by Jean de Boulogne, Coronation of the Virgin by Jacopo Di Cione, Slaves by Michelangelo, Tree of Life by Pacino di Buonaguida are the five must-see artworks here and do not miss out on them. Try visiting early in the morning for the best experience. Do get your tickets in advance to avoid the queues and make sure you have an hour to be through. 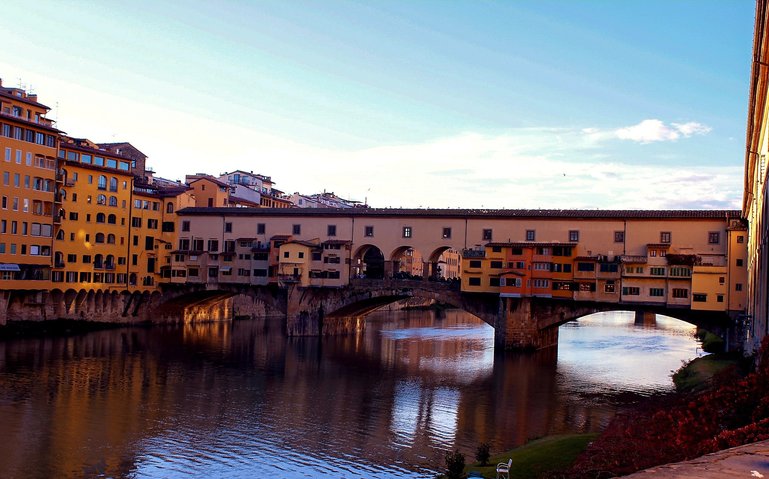 Also called as an everlasting symbol of Florence, Ponte Vecchio was the only bridge to cross the Arno river until 1218. As we strolled across the bridge, it felt so romantic as the views were so blissful. The stores on either side of the bridge sell a lot of stuff from souvenirs to jewellery. Do take a boat trip on the Arno river and experience the beautiful view of Ponte Vecchio. 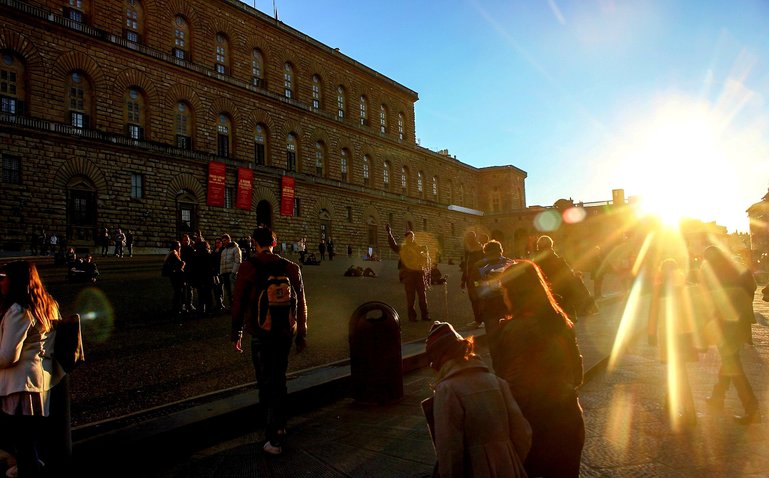 Another home to the Medici family, the palace consists of 5 museums. The renaissance art museum, silver museum, modern art gallery, porcelain museum and now for the best part, (drum rolls) Italy's only museum exclusively depicting the history of clothing and fashion. If you are a history thirsty person, the renaissance art museum is for you! 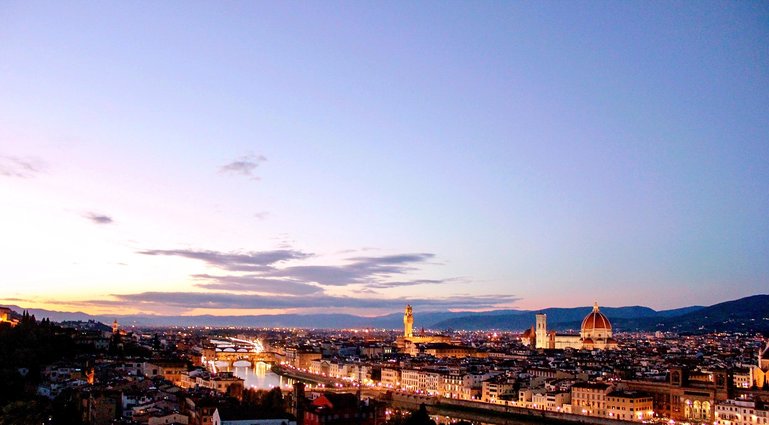 It is a half-hour hike to the hill where the most scenic Basilica di San Miniato al Monte is situated in the Oltrarno district. Try to be early so that you can get a view of the inside as it is one of the most beautiful of Tuscany. As the sun sets, make sure you are at Piazzale Michelangelo and enjoy the panoramic view of this beautiful city. If you are tired of taking the hike, bus number 12 or 13 goes there from the train station. Once you have soaked in all the beauty and essence of Florence at this point, do click a lot of pics!

And after the photo sessions, dining at a restaurant with such a view with a glass of chianti and pasta on your plates would be a perfect end to fall in love with Florence totally! 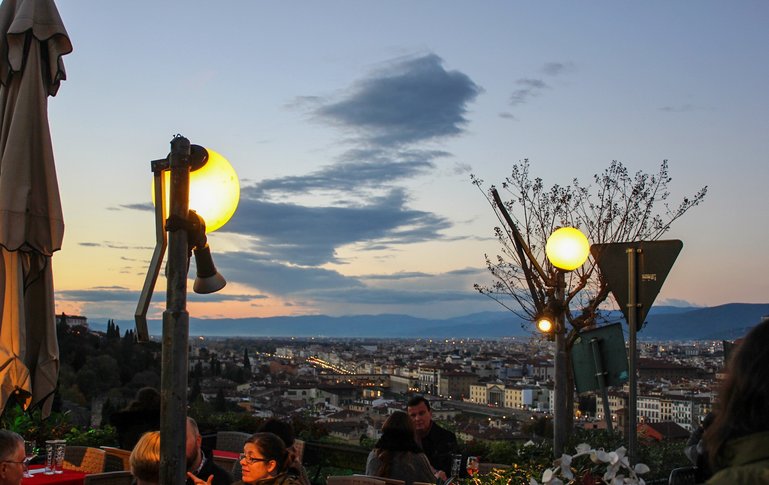 ​ A woman who believes in "Changing can'ts into cans and dreams into plans"!!! My name is Ankitha Prakash and I am a 20-something Indian born, currently pursuing my Doctoral Degree Program in Civil Engineering at Florida Atlantic University, Florida, USA. I was born and raised in Hyderabad (Telangana, India), a city famous for its rich cultural heritage and food. No wonder why I am a huge gastronome and love to travel to explore a variety of cultures. Since my childhood I have always noticed how my grandfather planned for the vacations way ahead and would manage to handle all the trips with ease. It definitely laid a foundation stone f... Read more 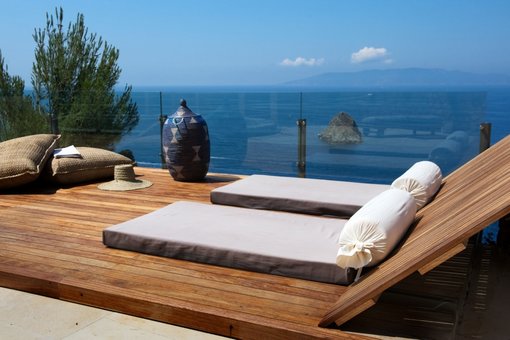 7 reasons to book a luxury Villa in Tuscany 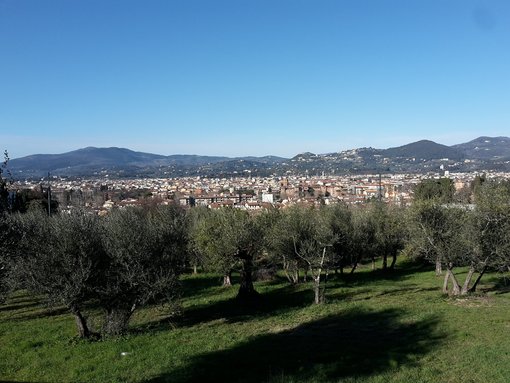