What’s the best way to spend one day in Florence? Spend at least three days in Florence to really soak in the Renaissance charm of this city. However, we know that a lot of people just don’t have that amount of time.

Planning your Itinerary – Plan ahead

This seems basic but we can’t emphasize it enough. If you know you only have one day in Florence, you’ll need to take advantage of the amount of time you do have. There are three main things to do before you go:

1. What time you arrive in the city and what time the last train leaves.
2. Where your accommodation is located and if they’ll let you drop off your bags (if staying for 24 hours). Ideally, you want to stroll off your train, drop your bags at the hotel and get going. Most accommodations in Italy have no problem with this, but it’s worth checking ahead of time. If you need help choosing the right neighbourhood for you, check out our guide to where to stay in Florence.
3. Museum hours. Many major museums are closed on Mondays across Italy, especially during the off-season. It also helps to reserve your tickets ahead of time, either through the museum website or through tour providers, as buying your tickets at the door often means waiting in long lines.

Things to See in Florence

Although Santa Maria del Fiore and its immense dome tend to soak up the spotlight, Florence is home to awe-inspiring churches packed with religious, historic and artistic significance. Here are the main churches in Florence, and why to see them:

It’s still the largest brick and mortar dome in the world and architects are still trying to figure out how the architect, Filippo Brunelleschi, pulled it off. The dome climb is one of the more popular attractions in Florence but in high season the line can stretch to over 2 hours. The other main sight in the cathedral complex are the bronze doors on the Baptistery call the “Gates of Paradise”. 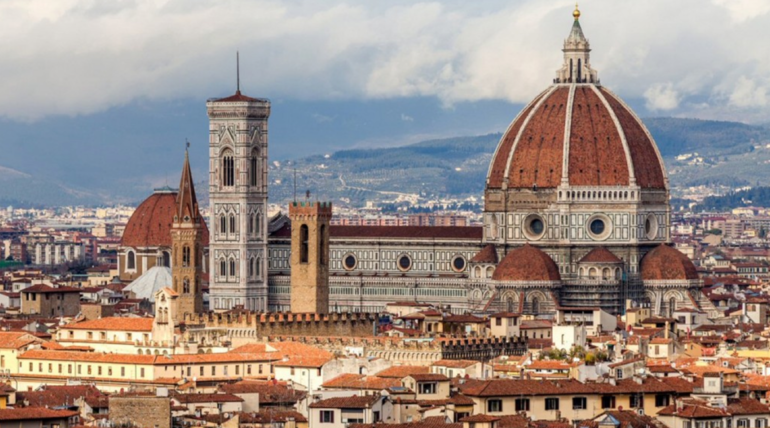 The Basilica and Cloisters of Santa Maria Novella

This spectacular church has a lively piazza in front that is always filled with people and street vendors. Inside it’s a treasure trove of art, including one of the first paintings using mathematical perspective – i.e. the accurate portrayal of three dimensions – after the technique was rediscovered during the Renaissance. There are also masterworks by Giotto, Lippi, and a series of breath-taking frescoes by Domenico Ghirlandaio that are among the best in Italy. 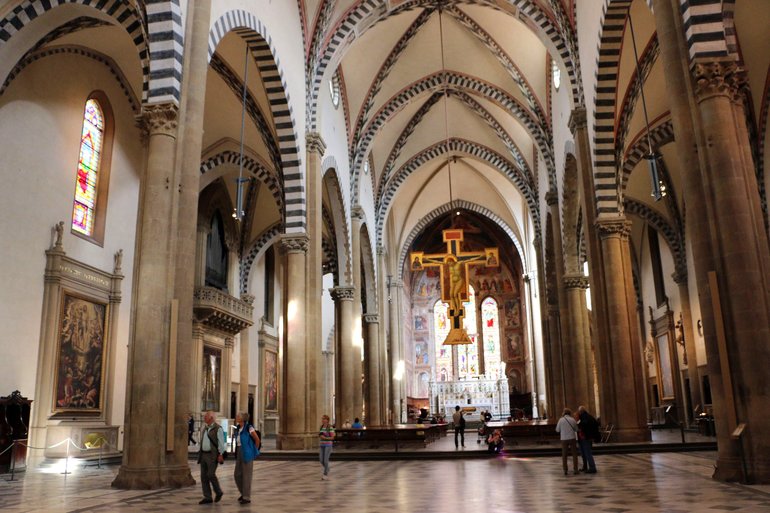 The Basilica of Santa Croce

The Basilica of Santa Croce is where many of Florence’s brightest stars are buried, including Michelangelo, Galileo, and Machiavelli. Dante has a memorial, but alas, he was exiled from Florence when he died and so his body is actually buried in Ravenna. The artistic highlight is a set of frescoes by Giotto but there is also a statue commemorating the playwright Giovanni Battista Niccolini that is thought to have inspired the Statue of Liberty. Also keep an eye out for water damage – a 1966 flood inundated the church and there is still a marker to show how far up the walls the waters reached. 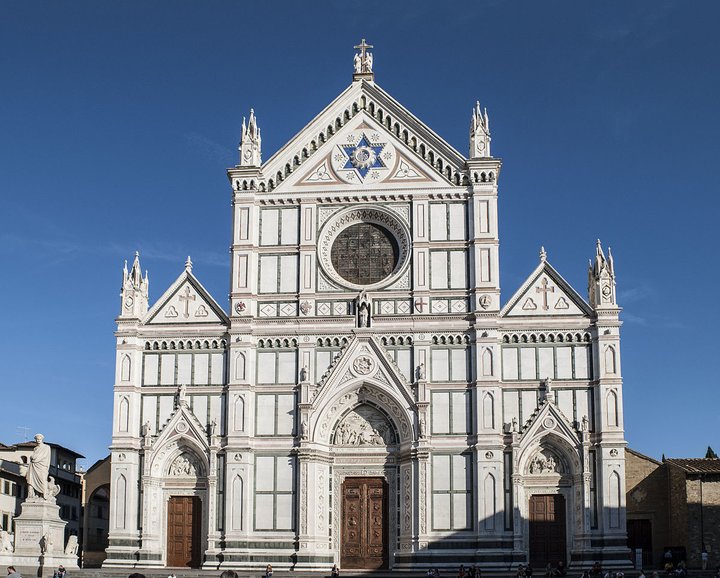 The Basilica of San Lorenzo features works by a who’s who of leading Renaissance artists. Designed by Brunelleschi, and decorated by Donatello, it also holds the tombs of the Medici family, some of which were designed by Michelangelo. His figure depicting Night in the New Sacristy is considered one of the finest he ever chiselled. The Medici Chapels require a separate ticket for entrance, but the tombs are definitely worth the extra charge. 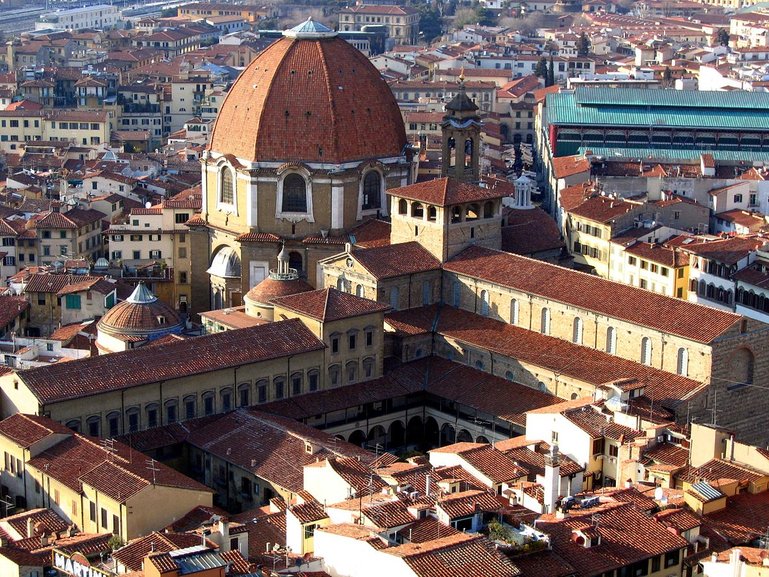 The major museums are the Uffizi, the Accademia, the Palazzo Vecchio, and the Pitti Palace and the Boboli Gardens.

With paintings from artists such as Botticelli, Raffaello, Da Vinci and more, this is the obvious go-to museum for one day in Florence. Although we adore its encyclopaedic collections, which include Michelangelo, Leonardo, Botticelli, Raphael, Caravaggio, Cimabue, Uccello, Lippi, Titian, and so many more, a solid plan is imperative before you go. Make a plan to see certain works or certain rooms. 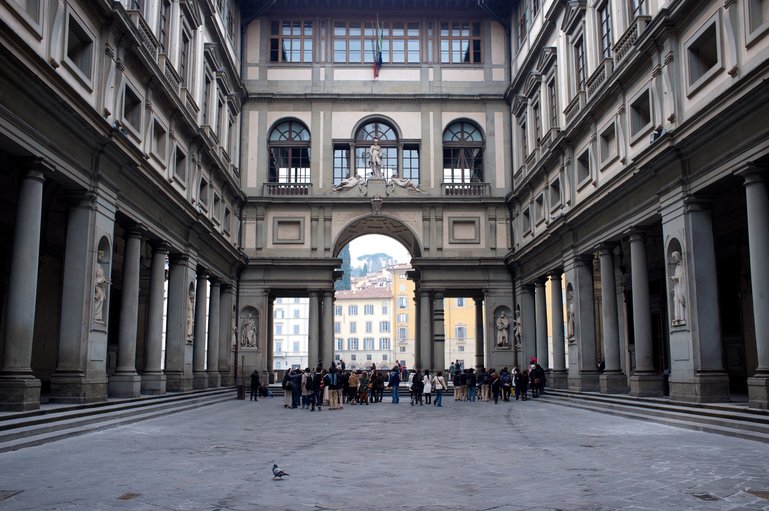 Florence’s Accademia is home to the magnificent David – Michelangelo’s masterpiece and probably the most famous statue in the world. Lesser-known are unfinished statues by Michelangelo that give you a fascinating peek inside the mind of a tortured genius. Don’t make the mistake of thinking these are the only important works in the museum, though. There are numerous other halls featuring paintings by Botticelli, Ghirlandaio, Orcagna, and more. The collection is smaller than that of the Uffizi, but it’s also much more manageable. 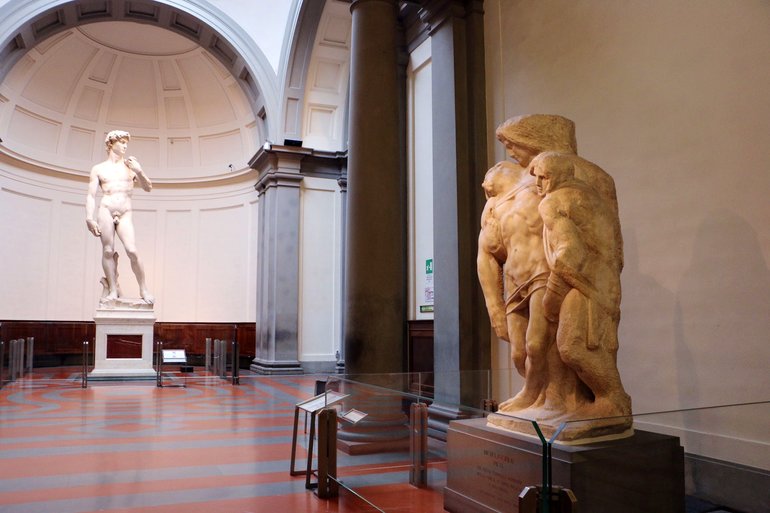 This titanic palace was the seat of power for the Medici family when they were the main engine of the Italian Renaissance, commissioning art and architecture that literally changed the course of European history. It’s as impressive from the inside as it is from the outside – especially the Salone dei Cinquecento. 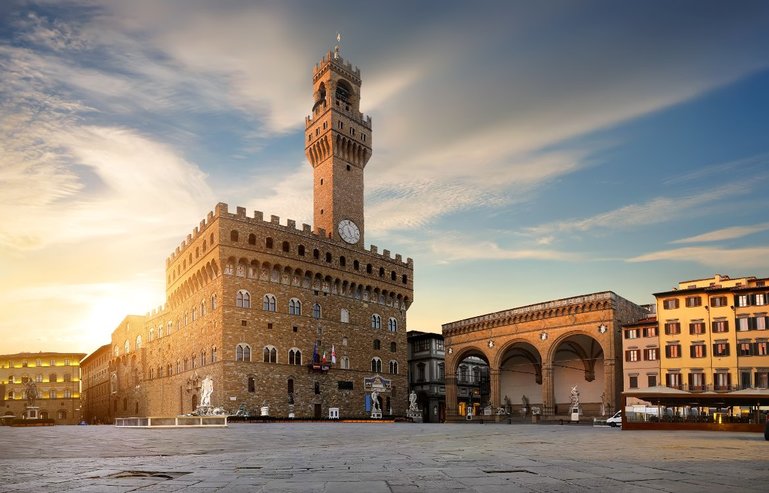 Dusk is an important time in the life of an Italian city, especially during warmer months. The heat of the day begins to lift, the locals come back out into the streets for their daily passeggiata.
In Florence, you can find your nearest wine bar and settle in for an aperitivo or pre-dinner drink, usually accompanied by some small plates. If you have a bit more energy, head to the Oltrarno. After passing over the Ponte Vecchio get ready for a 20-30 minute hike up the hill to Piazzale Michelangelo, where the Basilica di San Miniato sits. Be sure to get there before it closes so you can peek inside. Then watch the sunset from the best view of Florence in the whole city. It’s the perfect to end to an eventful day of exploring.

You will see hidden gems off that the Amalfi Coast offers, the view from La Tagliata is absolutely to die for. It is built on 3 terraces respecting the environment in which it is situated. On each terrace are organic vegetable gardens. On another level you have panoramic view of Positano, the Galli isles and Capri below.