Anyone who has studied art, architecture, film, or history will have heard of Florence Cathedral! Now known for Filippo Brunelleschi’s Dome, this most miraculous monument begs the question, how did the 14th century Florentines create this astonishing edifice?

The cathedral perfectly symbolises Renaissance Italy. An era that was centuries ago. Yet somehow the cathedral’s gilded dome, gothic facade and grand frescoes make it ever present! How does Florence Cathedral continue this enduring appeal, and why does it inspire hordes of tourists?

Having toured the complex twice, my only conclusion is that the cathedral allows everyone intimate access to the cathedral, Duomo, museum, Baptistery and Bell Tower. This intimate and close proximity to the construction and history of the cathedral whispers the secrets and mysteries surrounding the stunning dome and the largest frescoes of The Last Judgement in the world. With this comes a once-in-a-lifetime opportunity to live within and feel the energy that kindled an explosive flame known as the Renaissance; its art, humanism and new architectural and technological feats. The whole experience is spellbinding, enchanting and extraordinary!

Completed in 1434, the Cathedral of Santa Maria del Fiore is the fourth largest church in the world. Queuing to get in, the exterior screams of its enormity with the building area at 8,300 square metres, the length of 153 metres and the width of 38 metres! Designed by Arnolfo di Cambio, the exterior is to this day covered by the same coloured marbles (white, green and pink) that 14th-15th century Florentines would have been familiar with.

Indeed, the entire building, its structural and decorative elements of extraordinarily detailed sculptures and frescoes, make it more a piece of art than a church. Charmingly, this offers insight into why the building was constructed. Dating back to the Middle Ages, a time when Italian cities competed in building larger, greater, and more important cathedrals. Florence was a wealthy medieval city on account of its successful trade agreements and the Florentines thought of themselves as a city similar to that of ancient Rome. The cathedral therefore was their way of visually promoting this idea as they built the grandest church in Tuscany. 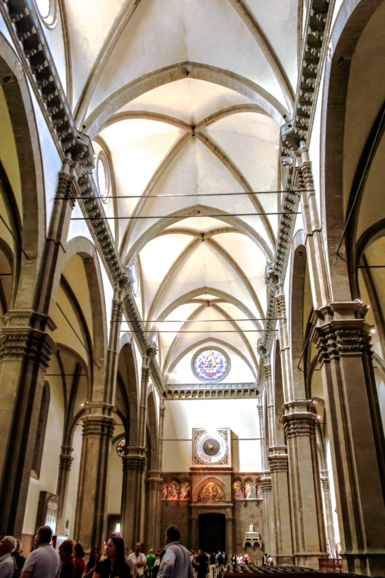 Surprisingly, the interior is rather plain compared to the outside. The height of the building leaves vast amounts of vacant open space, meaning it feels almost hollow and divorced from the magnificence that is the exterior. However, the fresco of The Last Judgement painted by Vasari and his students is worth seeing. The panorama of angels and devils are vividly three-dimensional, which highlights Vasari’s talent in all its shining splendour!

Known around the world as il Duomo, the dome of Santa Maria Cathedral remains the city’s greatest architectural pride! Nearly six centuries after its completion, there’s still jaw dropping amazement at this freestanding cupola. Secretive to the end, Brunelleschi carried the mysteries surrounding the construction techniques of his dome to the grave. We may never know how he or his masons positioned each brick and other structural elements with such precision. But the ticket on offer to meander through the double-shell dome to its very top gives a small glimpse into the answers!

What you witness on the outside is actually only the shell of the internal structure and what you walk up is Brunelleschi’s brick structure of 436 steps. Walking up the stairs, I felt as if I was ascending into the heavens. This was especially prominent when The Last Judgement was within touching distance. 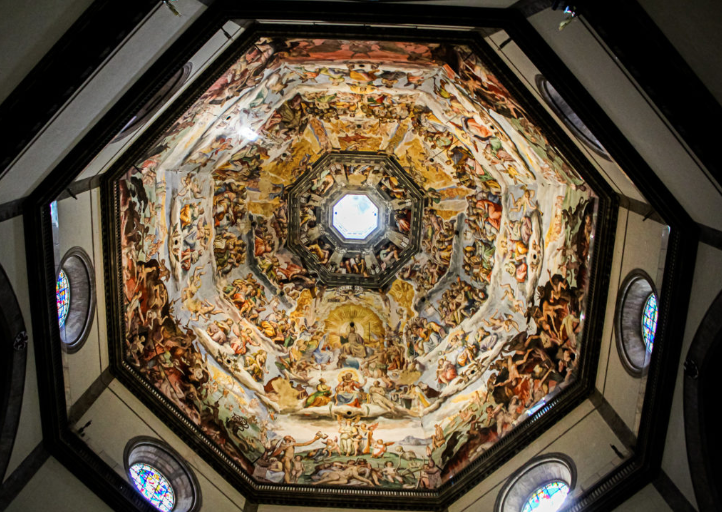 Brunelleschi’s use of sandstone and marble to mould the dome is mindboggling. Climbing up to the top, you’ll glimpse of the original brick layout, the herringbone pattern of bricks, and some original scaffolding used by the masons. 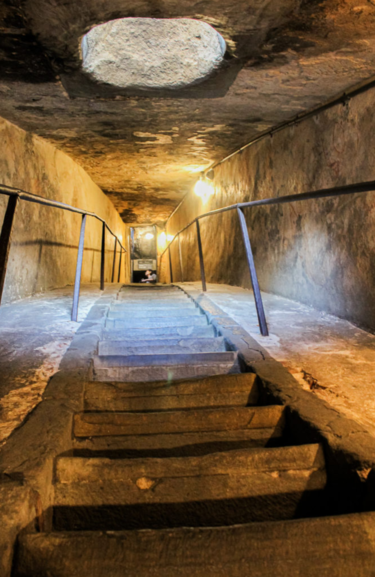 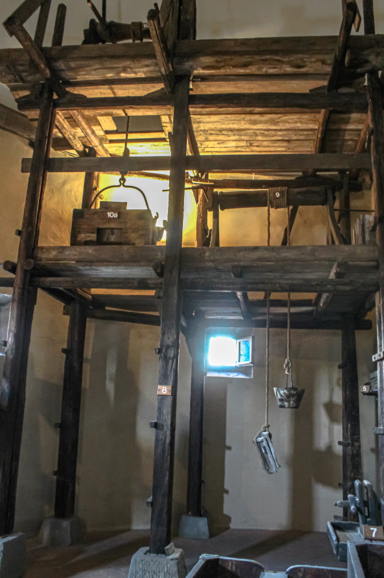 If this isn’t enough, standing on top of the Duomo provides a panoramic view of Florence City! This view with its terracotta tiles and rolling Tuscan hills is stunning!

Giotto’s Campanile is one of Florence’s iconic symbols. It is also a splendid example of Florentine Gothic architecture from the 1300s. Just like the Duomo, it offers marvellous panoramic views of the city. But unlike the Duomo, once you’re at the top of the Bell Tower, you’re given a unique perspective from which to admire the cathedral and Brunelleschi’s dome. Not only does this view command the tourists’ eye, but the bell tower’s carvings beautifully narrate the Christian doctrine. These carvings represent the concept of universal order, the story of Redemption, the story of the Creation of Man and the influence of Planets upon Man’s life and virtues! While its statues immortalise and bring to life famous artists including Andrea Pisano and Donatello! 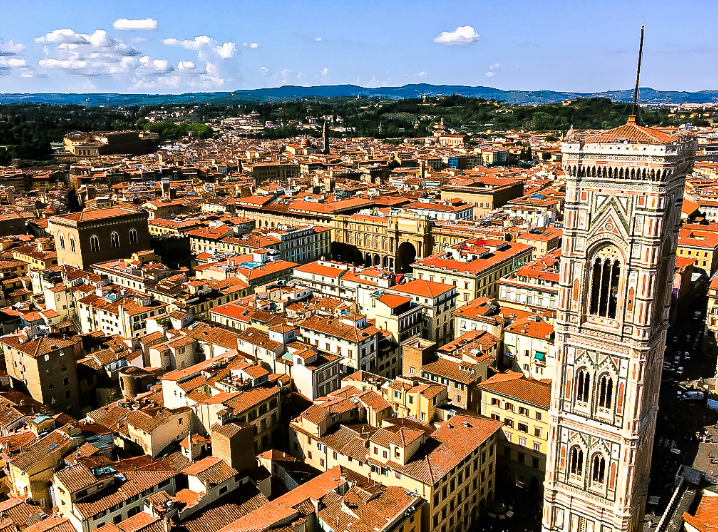 The Baptistery is the oldest religious site in all of Florence and has a past cloaked in myth. According to the locals, in the Middle Ages, Florentines believed it was an Ancient Roman temple dedicated to the cult of Mars. However, it is now dedicated to St. John the Baptist, Florence’s patron saint. It’s easy to remember Dante’s words in the Divine Comedy describing it as ‘my beautiful San Giovanni’. Indeed, the octagonal plan and geometrically patterned marble exterior are beautiful. These and the use of white Carrara and green Prato marble are everlasting reminders of Florentine Romanesque and Paleo Christian architecture carried out in the 11th – 13th centuries.

The Baptistery is renowned for its three large doors famous for their sculptures and bas-reliefs. They are among the most important ever created in Tuscany. Andrea Pisano created the south doors in 1300s while Lorenzo Ghiberti created the north and east doors around 1400s. The south doors comprise 28 quatrefoil panels depicting scenes from St. John’s life. While the eight lower panels depict the eight virtues of hope, faith, charity, humility, fortitude, temperance, justice and prudence. The three dimensional and glistening quality of these lower panels are stunning and transfix the beholder’s eye. 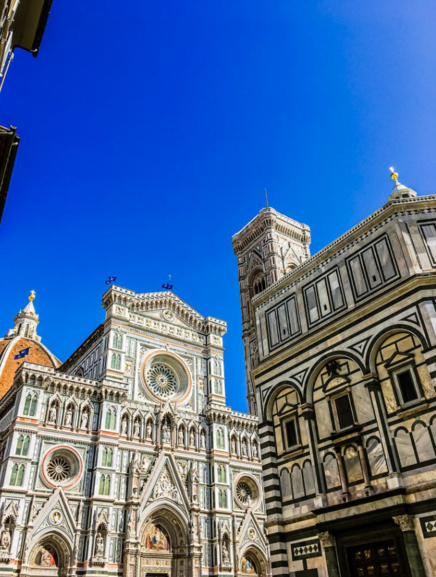 The north doors took 21 years to complete. They depict stories of the Life and Passion of Christ taken from the New Testament. While the golden Eastern Doors are most famously known as the Gates of Paradise. The Gates of Paradise received their name by Michelangelo, who is believed to have said ‘they are so beautiful that they would be perfect for the gates of paradise’. Its magnificent decorations of bronze-casting and gilding unite late-Gothic elegance with classical harmony, making it one of the best artistic designs in Florence!

The Republic of Florence funded the Opera del Duomo Museum in 1296 to oversee the construction of the bell tower and cathedral. Since then, its role has been to conserve these monuments. In 1891, the museum began to house over 750 works of art that had been moved from the Duomo and the Baptistery. The structure of the museum means you’ll get to live the life of the cathedral from past to present, seeing how it has changed over the years. 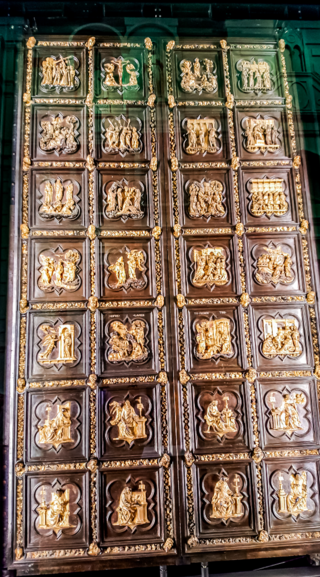 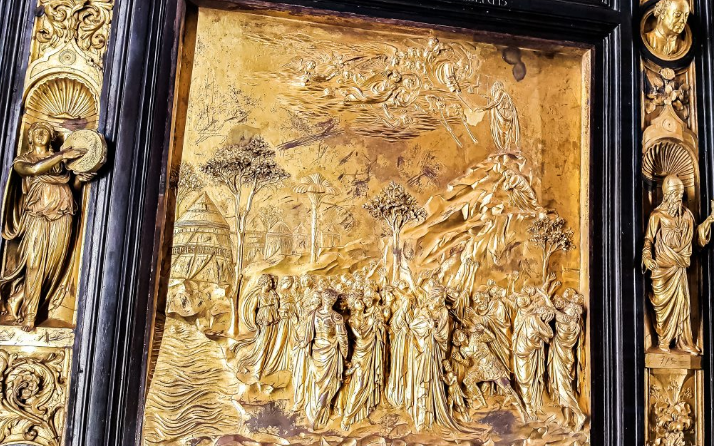 The ticket for the Cathedral gives you access to the Duomo, Baptistry, Bell Tower, Crypt and the Museum! Additionally, it is valid for 48 hours once you first enter! So, what are you waiting for, get exploring!

I am a native English writer and I am super passionate about writing, photography and anything that allows me to be creative. I have always had a love of the written word and you can often find me writing on my own blog or tucked away in a corner appreciating the magical use of words by my favourite authors. I am the founder of Jade Braham's Odyssey. Jade Braham's Odyssey is one of the few travel websites that brings travel and history together. Our mission is to negate 'touristy travels' and instead create a community that travels through the Earth's history and authentic culture. Through my website, we travel to understand and find ... Read more 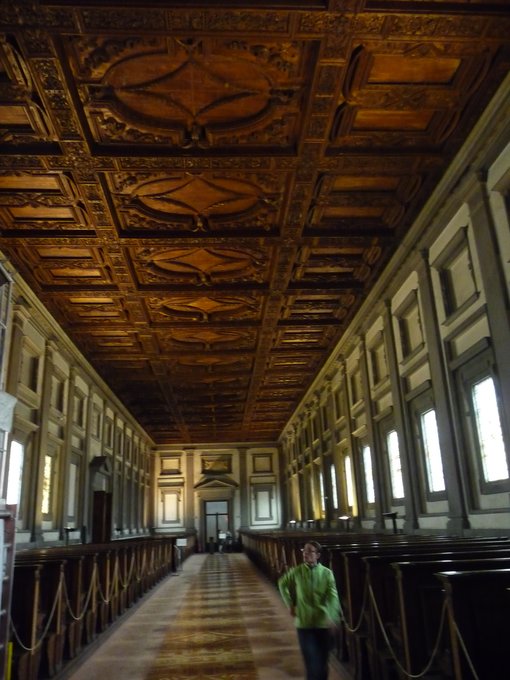