Africa's most iconic safari destination? It's a tough call, but the Serengeti is an incredible gem set at the core of a vast migratory ecosystem that incorporates the adjacent Ngorongoro Conservation Area and cross-border Masai Mara Reserve in Kenya.

Serengeti is Tanzania's national park in the Serengeti ecosystem in the Mara and simiyu regions. It is renowned for its yearly migration of over 1.5 million white-bearded or bridled wildebeests and 250,000 zebra and for its several Nile crocodile and honey badger. The Masai people had been grazing their livestock in the open plains of the eastern Mara Region, which they named infinite plains for around 200 years. The name Serengeti is an approximation of the word used by the Masai to designate the area as the place where the land runs on forever. The perpetual hunting of lions in the 1920s enforced the British administrations to make a partial game reserve of 800 acres in the area, these actions were the basis for this park which was established in 1951. 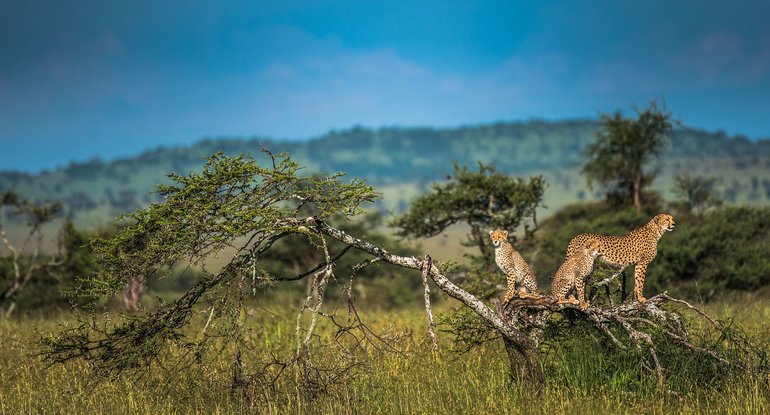 To preserve the wildlife the British evicted the resident Masai from the park in 1959 and moved them to the Ngorongoro conservation area. It is Tanzania's oldest national park and remains a flagship of the country's tourism industry, providing a major draw to the northern safari circuit encompassing Lake Manyara, Tanganyika, Arusha national parks, and Ngorongoro conservation area.

It has over 2500 lions and more than 1 million wildebeest. The park covers 14750 square kilometers of grassland plains, savanna, riverine forest, and woodland. It lies in northern Tanzania enclosed to the north by the Kenyan, where it is continuous with the Masai mara national reserve, Ngorongoro in the south, Mwasa game reserve lies in the southwest, west is the Ikongoro and Grumeti game reserves, and northeast and east lies loliondo game control area. Together these are areas form the larger Serengeti ecosystem.
The national park is defined as divided into 3 regions.

Serengeti plains, the almost treeless grassland of the south is the most emblematic scenery of the park, this is where the wildebeest breed and endure from December to May, other hoofed animals are, zebra, gazelle, impala, hartebeest, topi, buffalo, waterbucks also happen in massive numbers in the wet season, kopjes are granite formations that are common in the region acting as great observation posts for predators as well as a refuge for hyrax and pythons.

Western corridor, the black soil covers the savanna of the region. The Grumeti River and its gallery forest is the household to Nile crocodiles, Patas monkeys, Hippopotamus, and martial eagles, the migration passes through May to July. North, the landscape is subjugated by open woodlands largely commphora and hills ranging from Seronera in the south to Mara river on the Kenyan border and this referred to as the best place to find elephants, giraffe, and dik dak. The park is worldwide recognized for its abundance of wildlife and high biodiversity.
The wandering and some inhabitant wildebeest, which sum over 1.5 million individuals, institute the largest population of big mammals that still roam the planet. They are amalgamated in their journey through the Serengeti-Mara ecosystem by more than 200,000 plain zebras, 300,000 Thomsons, and grants gazelle, and tens of thousands of Topi and cokes hart beast. Masai giraffe, waterbuck, impala, warthog, and hippo are also plentiful. Some rarely seen species of antelope are also extant in Serengeti National Park, such as common eland, klipspringer, roan antelope, greater kudu, bushbuck, and dik dak.

Perhaps the most popular animals among tourists are the Big Five, which include:

Lion. Serengeti is believed to embrace the largest population of lions in Africa due in part to the abundance of prey species. More than 3,000 lions animate in this ecosystem.
African leopard: these secluded predators are commonly seen in the Seronera region but are present throughout the national park with a population of around 1,000.
African bush elephant: the herds have recovered successfully from population lows in the 1980s caused by poaching, totaling over 5,000 individuals, and are particularly abundant in the northern region of the park. 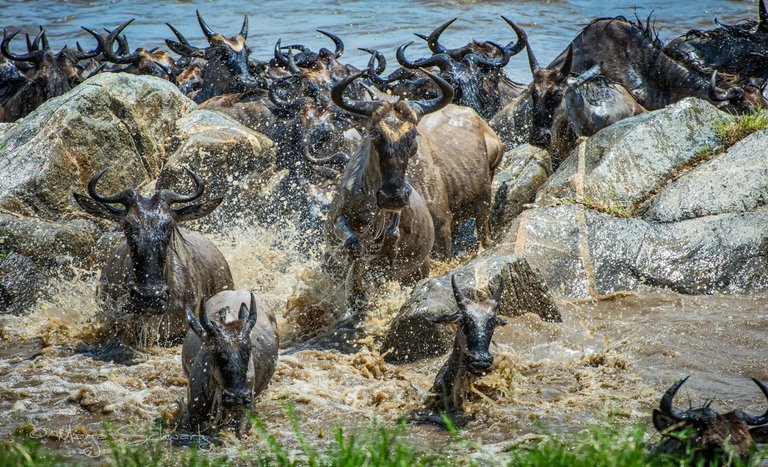 Eastern black rhinoceros: mainly found around the kopjes in the center of the park, very rare individuals remain due to rampant poaching. Individuals from the Masai Mara Reserve cross the park border and enter Serengeti from the northern section at times. There's currently a slight but stable population of 31 individuals left in the park.
African buffalo: the most numerous of the Big Five, with around 53,000 individuals inside the park. Carnivores aside from the Big Five, include the 225 cheetah which is widely seen due to the abundance of gazelle, about 3,500 spotted hyena, two species of jackals, African golden wolf, honey badger, striped hyena, serval, seven species of mongooses, two species of otters and the East African wild dog of 300 individuals, which recently reinstated (locally extinct since 1991).

Since 2005, the protected area is considered a Lion Conservation Unit together with Maasai mara national reserve and a lion stronghold in East Africa 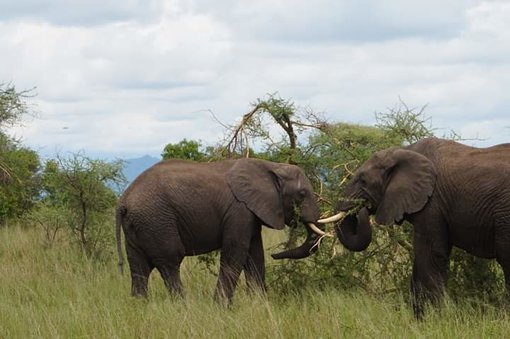 This is a six days group & camping tour with maximum of 6 clients (in a custom safari jeep with pop up roof) accompined by a guide/driver & the chef. this tour takes you around the famous north circuit parks, serengeti (for 3 days) being the largest & famous for over million wildebeest migrating alongside over 250000 zebras, then the ngorongoro cra

Our 5-day Tanzania safaris, tours, travel and trekking packages, which specifically include 2 nights in Serengeti National Park, have been designed to offer you more time in the Serengeti to witness the wildebeest migration.