Steven on the great wall of China

Five years ago (where does the time go?) I did an amazing two-day hike on the Great Wall of China and camped in one the ancient guard towers. I was inexperienced, unfit and unprepared. But I absolutely loved every step of it. I walked for hours on end over the ruins of the wall, climbing on steep steps, some up to a meter high. As of today, it is still one of the most amazing hikes I have ever done. Come to think of it, it may even be the first real hike I had ever done. Let me tell you about my experience hiking and camping: the Great Walk of China.

It was my first solo trip and my first destination. I was 24 years old and had been working my butt off for two years after my graduation to save up some money. The plan: fly into Beijing, China and see how long I could stretch my travel throughout Asia before I needed to go home again.

I have to be honest. I have had a deep longing to go to China for years, but Beijing was a pretty damn challenging place to start off my trip with. The culture shock was way more overwhelming than I initially anticipated. Luckily, I stayed in a fun hostel in a beautiful hutong (an old Chinese neighbourhood) where I met some other travellers to get my spirits back up.

I ordered a cold Tsingtao beer and met with one of my roommates. He was a friendly guy from the United States, living in Shanghai to teach English. He told me all the amazing things that he loved so dearly about China. And that his reason to visit Beijing was to hike the Great Wall of China. Then, he unexpectedly asked me: “Mate, don't you want to come and join me? It would be awesome to have someone around!”

He was very well prepared. He had mapped out the exact two-day route from Jinshanling to Gubeikou he wanted to hike, how to get there by public transport and he even brought a tent with him to camp. Also, he could speak some Mandarin which would come in very handy later on.

I, on the other hand, was not prepared at all. I had brought only one pair of shoes: the worn-out Converse All-stars I was wearing. I did not have a sleeping bag and hiking gear, nor did I have a single clue what I just signed up for. But hey, he was a cool dude and I was eager to explore China. So obviously, I replied: “Of course, I would love to join you!”

2. On our way to Jinshanling

We took off early. We both left most of our clothes behind in the hostel, taking only the bare necessities with us (including an odd-looking bottle of Great Wall wine, of course).

After a few stops with the metro, we arrived at the bus station where we had to find a bus to Jinshanling. Let me put it this way. If it wasn't for my Chinese speaking roommate, there was absolutely NO way I would have been able to find the right bus here. There were multiple ticket offices, about 20 terminals, no signs in English, no people who seemed to speak any English. Half an hour later, we hopped on the right bus and were on our way to the Great Wall of China.

We drove for about two hours through the endless suburbs of Beijing and got off the bus in a little town called Taishitunzhen. This, unfortunately, was not the right place. Turned out my roommate's reading of Chinese was not nearly as good as his speaking.

Taishitunzhen probably doesn't see Western tourists often. There was a little street market going on, and we suddenly became the centre of attention. There were pictures taken and people were very interested in who we are and where we were going to. When my roommate, in his best Mandarin, explained our plan to hike to the Great Wall at Jinshanling, I saw the surprise in their eyes. One sweet older lady was so amazed by this story that she offered to drive us there.

For another half an hour we sat in the back of an old rattling car, listening to Chinese opera. But the lady was concerned about us and she wouldn't let us hike the Wall on an empty stomach. She insisted to take us to her favourite roadside restaurant and eat up.

Unfortunately, I cannot recall where this place was exactly, but it was amazing. As we entered the restaurant, we were officially welcomed by the owner, the cook and all the staff. She ordered us enough food to feed a family for a week. Noodle soup, hotpot, dumplings, rice and so much more amazing food. The cook and staff stayed to watch us eat until we couldn't take another bite and we politely told them we were finished. They offered us some cigarettes and we continued our way to for Jinshanling.

4. Starting our hike in Jinshanling 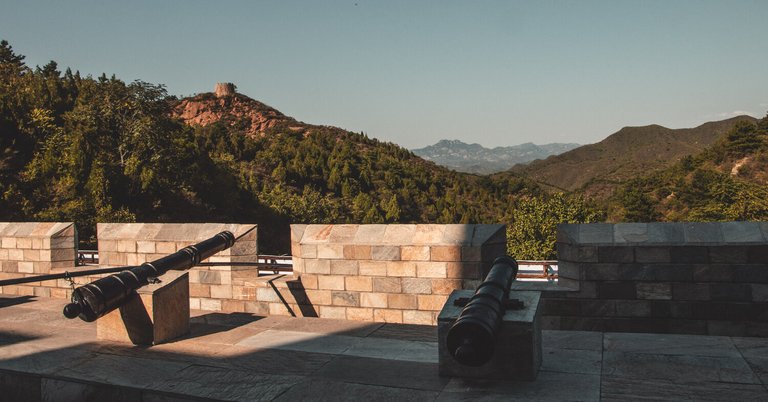 Canons on the great wall of China

I was super excited to finally see the Great Wall of China. Our driver dropped us off right at the entrance and we gave her a small tip for her help. There was a wide street leading up to a restored grand guard tower. Little stalls of both sides of the street were selling crafts, food and Great Wall souvenirs, but we kindly passed on those. We bought an entrance ticket for 65 RMB, which is roughly around 8 euros, refilled our water bottles and we started the hike just passed noon.

This first part of the Great Wall has been perfectly restored, back to its original state in 1368 and there were a few other Chinese tourists walking around. A row of old cannons pointed over one side of the wall; North towards the once-massive Mongol Empire. As far as my eyes could see, the wall meandered over the hills like a giant Chinese dragon. I was absolutely stunned by its magnificence.

We walked from one guard tower to the other. Enjoying the unreal scenery. Step, after step, after step. Apart from the scorching sun, the first part was not very challenging. The wall was perfectly walkable and the steps were normal-sized. However, after passing our 15th (or so) guard tower, the restoration work had stopped.

From here, the wall was basically left untouched for hundreds of years and most of it was slowly falling apart. Bush and plants covered the top of the wall and the at some parts there were steps missing, forcing us to clamber up or down some meters. 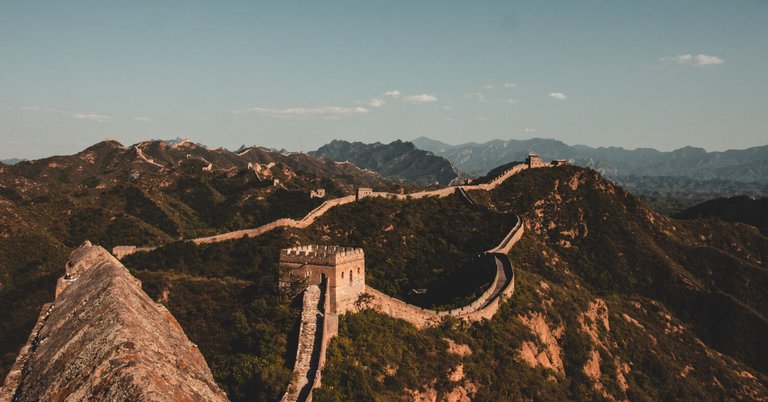 Damaged part of the great wall of China

At one point, there was a military area blocking the way on the wall, so we were unable to continue on the wall and had to take a detour through Spider Valley. This little detour was actually a beautiful walk with no that many spiders, but it took us was longer than we'd anticipated. We lost the track for a bit and met a French Canadian hiker - who was also lost. He joined us on our hike and we ended up at a little farm. The Chinese farmer was very helpful and told us that he often meets people here looking for the way. He gave us some water and showed us the right way. 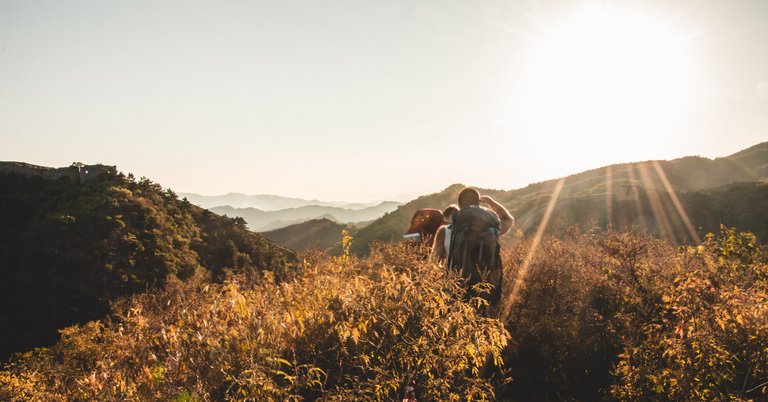 It was right before dark that we found the Wall again. We found a big open guard tower on which we decided to set up camp. Our new French Canadian friend offered to look for some dry wood to make a little campfire. My roommate and I prepared the tents and popped the bottle of Great Wall Wine to celebrate this amazing achievement. We spend the night talking by the campfire and gazing at the bright stars above us. 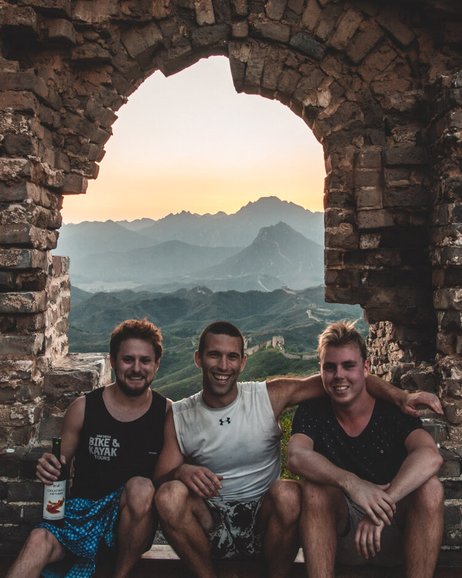 Sunset on the great wall of China

Camping on the great wall of China

6. The final part to Gubeikou

The next morning I woke up before sunrise. I was absolutely broken, my feet were killing me and so damn cold! The temperature had dropped from 25 degrees Celsius during the day to about 0 degrees at night. The extra clothes and the towel that I used as a blanket could not keep me warm. I started doing some exercises to get my blood pumping and my temperature up. And then experienced one of the most wonderful sunrises I had ever seen.

Purple sunrise on the great wall of China

The sky first turned purple and revealed the mysterious misty mountains on which the majestic Great Wall lies. Then the sun turned everything golden and finally, I started to warm up again. The others woke up too. We quickly ate our breakfast and we packed up again. On to the final part to Gubeikou.

This last hike was again beautiful, but challenging, mostly because of my terrible choice of footwear for this hike. I had blisters on places that I didn't know even could have blisters. Far in the distance, we saw the town of Gubeikou and the wall going up a VERY steep mountain at Wohushan (I would have hiked that too if it wasn't for my blistered feet). We arrived around noon and found a bus that took a bus back to our hostel in Beijing. 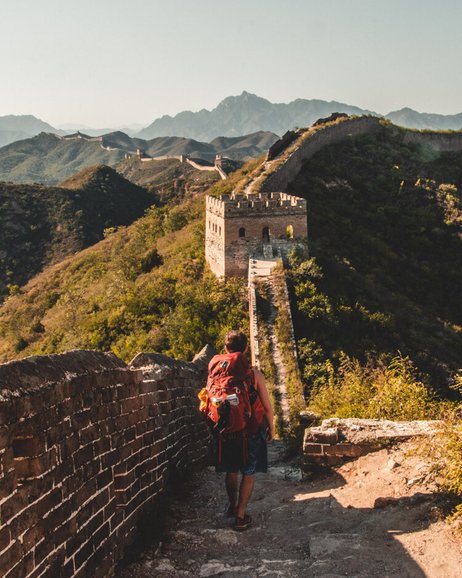 The last part of the hike

The great wall of China

7. Need to know before you go

Camping at The Great Wall of China During the Pandemic!

The must visit places in Beijing

Visiting the Great Wall Of China