Traveling Outside of Seoul: Nami Island and Hwaseong Fortress

I have always lived in a smaller city and NEVER had to use public transportation. In Korea where so many people go far places all the time. During the fall I took three small trips outside of Seoul (not counting Jeju). I don't know why but seeing the cities outside of Seoul makes me feel so much more at home. Seoul is amazing but something about it feels cold.

My first destination outside of the capital city was late summer to Suwon Hwaseong fortress. Suwon is a mid-sized city about two hours south of Seoul with a historic fortress and palace! The Suwon Hwaseong Fortress has a lot of history that you can look upon the way there! When we arrived mid-day and we walked all along the fortress walls that were surrounded by city life. Here you can be standing on a 250-year-old fortress and see skyscrapers gleaming and cars driving by. We walked around half of the wall and then entered the palace. Entry is free with Hanbok or else $1.50 for the palace, there are also other attractions in the are that we did not pay for. And if you prefer, a Hwaseong Fortress walking tour is also available. The palace was like a maze to me, but it had exhibits and information in each area that was very cool (other palaces we have seen did not have anything inside). We spent the hottest part of the day in the palace wondering how they lived back 250 years ago. The story of this specific palace is that it was built in honor of the late crown prince when his son became king. The crown prince was killed by being locked in a rice chest because he acted very irrationally (now suspected to be bipolar disorder), it was his own father that gave the order and he was locked in the rice chest for about a week. the palace had wax figures and mock rice chests you could climb in.

We later got some famous beef rib barbeque that was some of the best meat I have ever had and the side dishes were amazing. It was $25 per person and had too many side dishes to finish. We of course did not know what we were doing so the very kind server helped us cook the meat to perfection! We ended the night looking at the sunset over the fortress walls go down between the tall buildings. 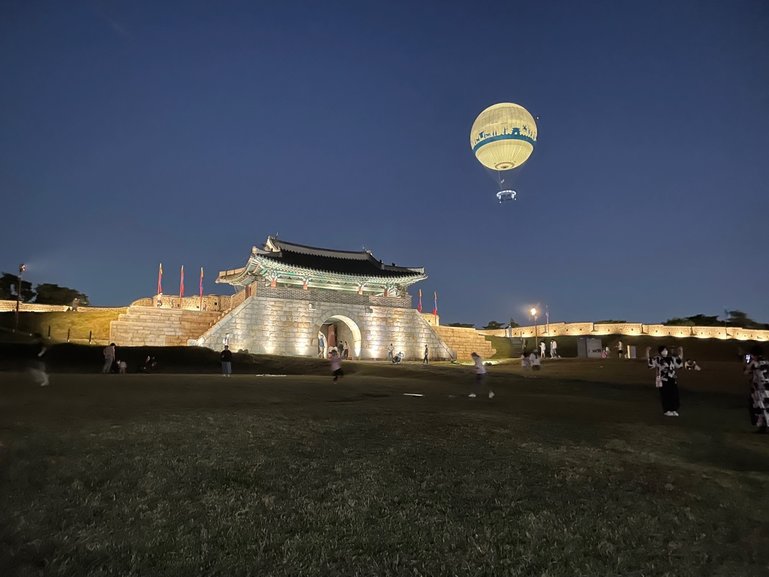 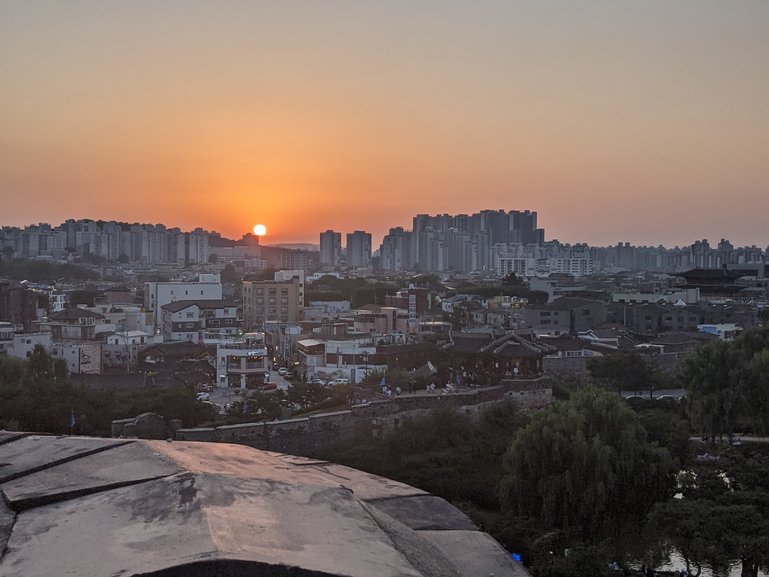 The trip to Suwon was one of the best days I have had, but just got beat by my trip to the west of Seoul in Gapyeong and Gangcheon.

At the beginning of November Kimberly and I decided we needed to finally do two outdoor things before it got cold. Nami island is a popular tourist destination, but we had seen a beautiful video of a rail park. Both of these activities were in the same area about a two-hour subway ride away. The subway comes VERY infrequently and is often 10 minutes late, make sure to arrive on time or you may have to wait 30 minutes. We took the normal subway but there is also an ITX train that costs much more but is faster. You can decide what is more with it. The Gancheon Rail park is an abandoned train line that they put carts on it with two or fours seats.

We paid $35 for the two seats and enjoyed the ride. The highlight is the amazing view of the mountains and northern Han river. The other fun thing was the four tunnels with various themes, some played loud music and had lights and bubbles. We laughed very hard and the pedaling was not even difficult. The view was amazing but definitely dress warmly if you are not going in the summer months. The whole experience was about 45 minutes long. After we finished the rail bike you get a quick snack stop and we got hot cocoa in the cold morning and hopped on the romance train! (this is included in the price of rail park) this was the part that brings you back into town. 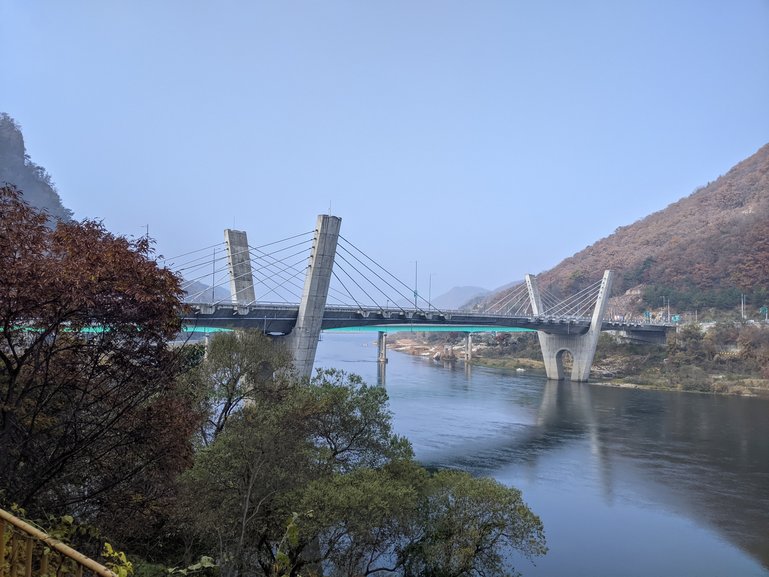 After leaving the Rail park we went to Nami Island. This Island is an island actually in the middle of a river! It is the perfect destination for the fall time and photos! To get to the island you have two options, ferry boat or zipline! We took a one-minute zip line to the island and went 80 miles per hour over the river. This only cost $40 for the zipline, ferry ride back, and entrance to the island. It may be scary for those afraid of heights, but I think it felt very safe and secure! Nami Island is full of different trees and flowers and animals. The yellow leaves were falling down over our heads and there were strings lights lighting the paths. Kimberly and I relaxed and walked around for a few hours then decided to get our FAVORITE Korean snack, hotteok! ! Hotteok is a pan-fried doughy treat that is filled with brown sugar, cinnamon, honey, and seeds. It is so warm and tasty, wow I really want some right now... 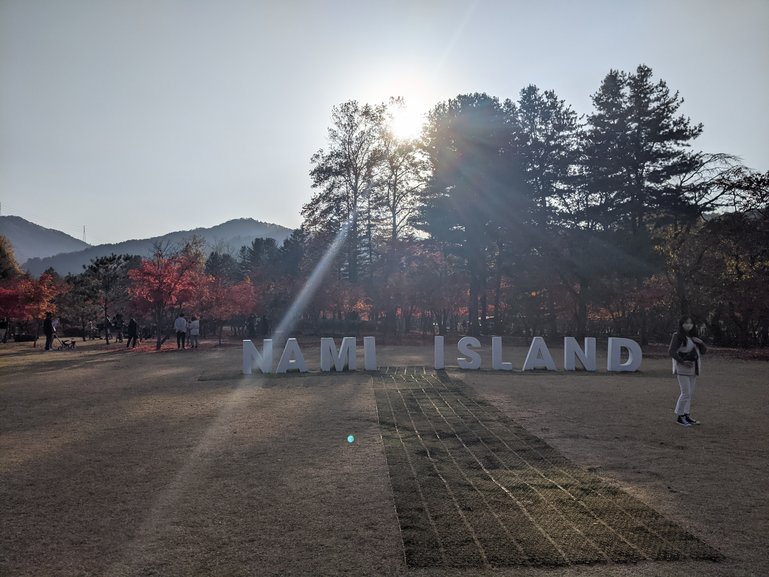 We were able to leave the island a bit after a beautiful fall sunset through the colorful leaves and get some of the famous Korean food in the area. The specialty of this area is Dak Galbi which directly translates to chicken ribs, but it is actually spicy stir-fried chicken. You cook it on the table with cabbage, red pepper sauce, rice cakes, and sweet potato. It is not my favorite cut of chicken meat, there is lots of fat on it but I really enjoy the dish. I have been forced to get used to spicy food in Korea so now when I return home I think I will find myself missing it. The trip back has to start fairly early because of the infrequent subways, don't forget to check out the views on the way there. Many mountains and rivers paint the beautiful Korean landscape! 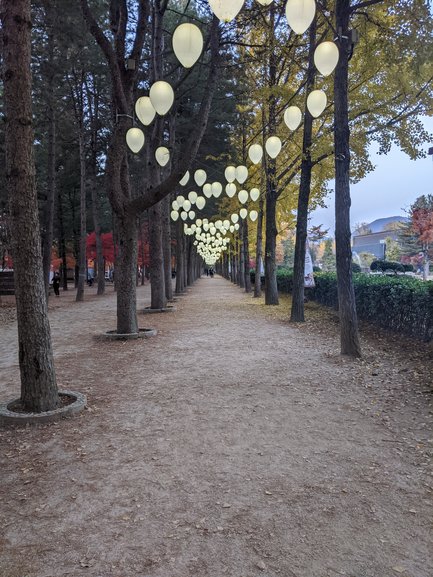