Innsbruck is a very nice city in alpine part of Austria and it's the capital of Tyrol region. When you think of Innsbruck you probably think of skiing and other winter sports. But there is much more to see and do in this city at any time of the year. We travelled to Innsbruck in summer and really liked it!

Start with a walk in Innsbruck's old town center – Altstadt. It is pretty compact and can be easily explored by foot. Lively decorated houses, narrow streets and historical landmarks – you will find it all in the Altstadt of Innsbruck. 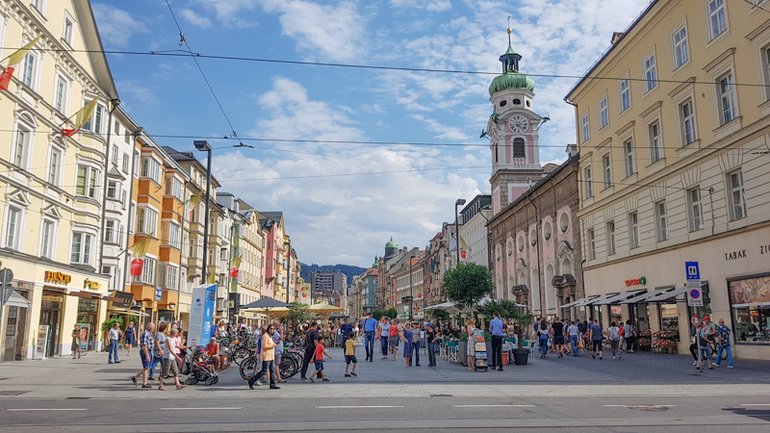 Innsbruck Cathedral (or Cathedral of Saint James) is an 18th century cathedral in the old town featuring two bell towers seen from afar when you approaching the Altstadt. Go inside to see the cathedral's baroque style interior.

Another historical church located in the old town is The Hofkirche (Court Church) – 16th century church executed in Gothic style. It's famous for its collection of German Renaissance sculptures and Emperor Maximilian's marble cenotaph.

The Goldenes Dachl (The Golden Roof) – is a famous historical landmark in the old town. The iconic Innsbruck structure has been constructed in the 16th century for Emperor Maximilian I. The balcony with the golden roof has been used by the emperor to observe different events happening in the square in front of it. 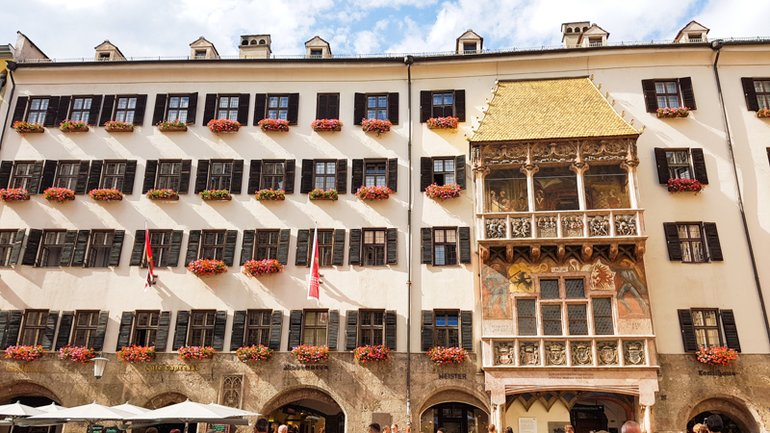 Every city has a public central square and Innsbruck is not an exception. Innsbruck's Town Square is located in the center of the old town. It's a pedestrian area with a beautiful view of the mountains and there is a 18th century's marble monument – St. Anne's Column – in the middle of the square.

Maria-Theresien Strasse – a street with many shops, cafes and nice looking houses starts at the town square.

If you walk from the Town Square along the Maria-Theresien Strasse you will end up at the Triumphal Arch. It's a beautiful historical landmark and if you look through it to the south you will see famous Bergisel Ski Jump.

Even though Bergisel Ski Jump is a tower for, well, ski jumping you can visit it all year round. Buy a ticket to get on top of the tower to enjoy sweepings views to Innsbruck and surrounding Alps. You can even have a lunch or dinner at the Bergisel SKY restaurant at the top.

Well, traditional Austrian food deserves a dedicated post, but I'd like to mention at least two foods you must try when in Innsbruck.

Innsbruck is the capital of the Tyrol region that is famous for its gourmet meat products such as ‘Tiroler speck', cold cut ham and beef. Taste Tyrolean meat in a restaurant or buy it in one of the meat shops in the city.

If you are not into meat products, then try strudel! Traditional Austrian strudel is a delicious dessert and they make it with all kinds of fillings. You will find strudels for all tastes. Sweet varieties are often served with a scoop of ice-cream. Yum! 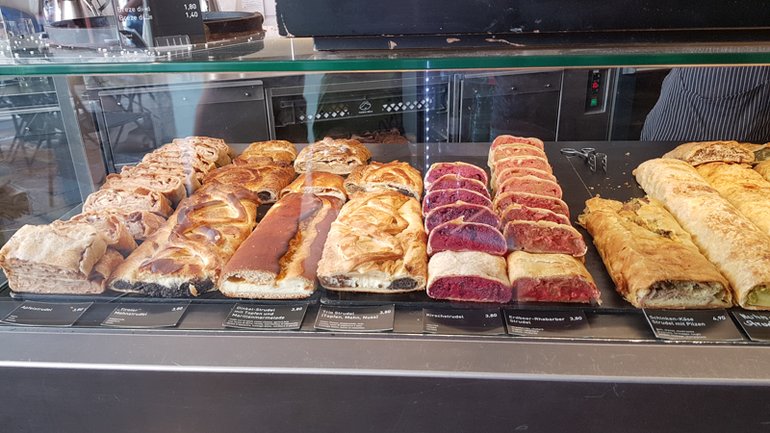 After you ate a strudel you need to keep walking to compensate all the calories in it, right? 😉 Head out from the old town towards the river and Innsbrucke bridge. Did you know that ‘Innsbruck' name of the city actually means a Bridge over the river Inn? Nice views open from the bridge – beginning of the old town on one side, neat colorful houses on the other side and cretaceous colored river in the middle. 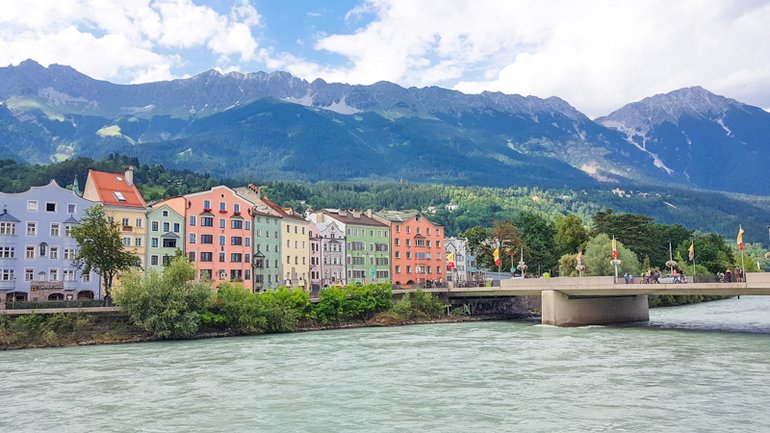 There are many museums you can visit in Innsbruck.
Visit the huge complex of a former Imperial Palace in the old town. The main building – Hofburg – is only a part of the larger complex including the Hofkirche, Innsbruck Cathedral and other buildings. You can buy a ticket to go inside and see the imperial apartments, chapels, stateroom and halls.
Learn about Tyrolean heritage in Tyrolean Folk Art Museum or go to the one of the oldest national museums - Tyrolean State Museum in Innsbruck.
If you are travelling with children take them to The Tyrolean Museum Railways or perhaps even to The Armoury - a former military arsenal that is now a museum.
Another interesting museum for children and adults is Visual Museum Innsbruck - a world of optical illusions. 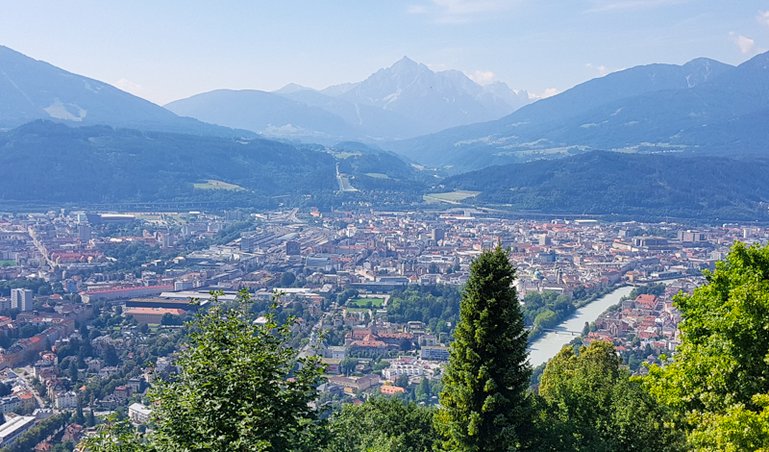 If you want to get even higher to the mountains (for skiing or hiking or nature watching), then ride The Nordkette Cable Car. The cable car station is just across Hermann Buhl Platz and it will take you to the Nordkette, the southernmost mountain chain of the Karwendel.

A bit further from the city is the Swarovski Crystal World - approx 25 minutes by car (or bus) from Innsbruck.
There is a also Swarovski shop right in the old town of Innsbruck (Herzog-Friedrich-Straße 39) where you can also see Swarovski jewelry and crystals on display.

We spent in Innsbruck two days and truly enjoyed the city. Hopefully, after reading this post you are convinced that Innsbruck is absolutely worth a visit in summer!

TravelByExample is a travel blog of a kiwi family that loves to travel and explore new places. We have lived in four countries (Ukraine, Ireland, Netherlands and New Zealand) and travelled to many-many more. In our blog you will read about our travels and moving countries, find example itineraries and travel inspirations.