Mexico is known to be one of the most colourful countries in the world and furthermore, Guanajuato City is frequently claimed to be the most colourful city in the country. Located within a steep valley, the vibrantly painted houses of Guanajuato that cover the hillsides and valley floor are certainly a stunning sight.

Additionally, Guanajuato is also a UNESCO World Heritage Site with a historical centre which dates back to the 16th century. Indeed, its winding, narrow streets, along with its alleyways and many steps, are fascinating to explore. This charming city is situated around five hours from Mexico City by road and is the capital of the state of Guanajuato.

We first visited Guanajuato City a few years ago. We were immediately enchanted by its colourful colonial buildings along with its leafy plazas and beguiling atmosphere. Here we take a look at the city and its many delights. 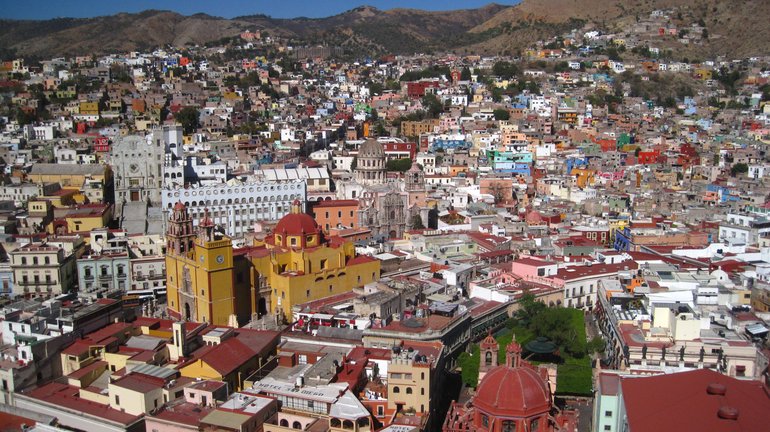 A view of the city from the hilltop

We chose the Hotel Balcon del Cielo and it was a great option. It's a mid-range hotel and is situated next to the funicular at the top of the hill. In fact, tickets for the funicular were included in the room price. The hotel was both friendly and comfortable, but the highlight of our stay was the sweeping view of the city from our balcony. As a matter of fact, it was especially stunning at sunset when a warm orange glow engulfed the colourful houses on the hillsides. 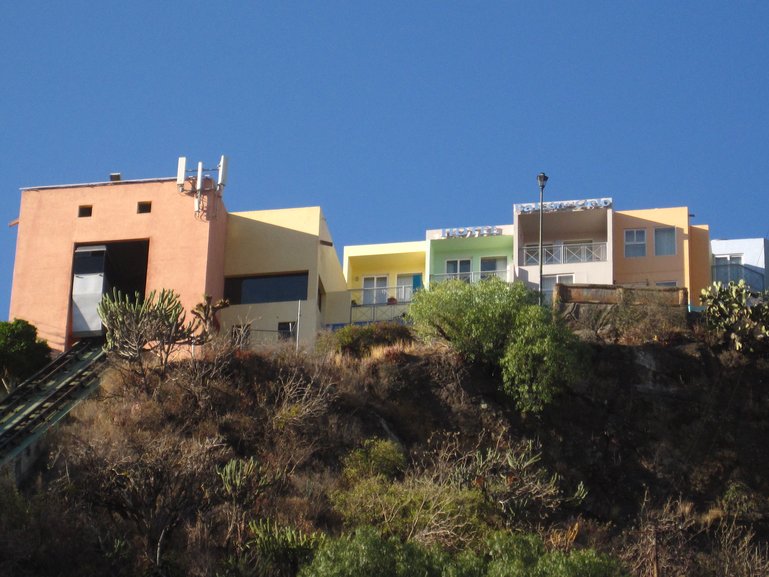 Hotel Balcon del Cielo next to the funicular

Joining a callejonada is the perfect way to experience the music and folklore of Guanajuato. Every night of the week, revellers follow a traditional local band attired in 17th century costumes, wandering through the winding streets on a guided tour with a difference. The crowd are entertained by Mexican folk songs together with dances, amusing skits and storytelling. It's a wonderful way to get under the skin of Guanajuato and have a great night out at the same time. Tickets can be purchased during the day in El Centro.

Otherwise known as the Alley of the Kiss, Callejon de Beso is the narrowest alleyway in the city. The alley is, in fact, the focal point of a famous, but tragic story, which is based on true events. It's the tale of a young girl from a rich family who fell for a young miner. The girl's father doesn't approve and the couple have to keep their meetings a secret. The boy rents a small room opposite the girl's family home in Callejon de Beso. Because the alleyway is so narrow, they are able to furtively meet at night and kiss across the alleyway (hence its name). When the girl's father finds out about their liaison, he consequently murders them both. As a result, their ghosts are said to haunt Callejon de Beso. 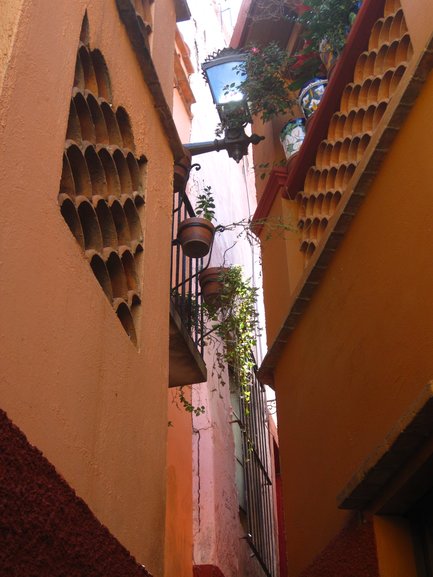 This small funicular is situated behind Teatro Juarez and transports up to five people at a time to El Piplia, the statue which overlooks the city. It only takes a couple of minutes to reach the top, from where there are panoramic views of the entire valley. Indeed, sunset is the best time to take the funicular – the evening light is sublime and the city is bathed in an incandescent glow.

Artist Diego Rivera was born in Guanajuato and his birthplace was transformed into a museum after his death. The colonial building has been restored to its original appearance, with furnishings that date back to 1886, the year of his birth. Additionally, there are a few of his paintings on display.

Museum and Home of Rivera Diego

The exterior of this grand theatre is, in fact, inspired by the architecture of Rome. Indeed, twelve imposing pillars are featured at its majestic entrance. In contrast, the décor within is oriental in style. Construction took place between 1872 and 1903. The theatre seats 902 and hosts a full programme of events including the International Cervantes Festival.

This triangle-shaped plaza is located in the heart of the city and is lined with bars and restaurants together with several cafes. During the day, it's a great spot to chill out, have a drink along with a bite to eat. There is plenty of shade under the Indian Laurel trees, which form a canopy and an escape from the sunshine. The plaza is at its most exuberant at night, when mariachi bands entertain the crowds and dancing often ensues. Frequently, buskers play on the steps of San Diego Church while trinket vendors do the rounds and artists display their work.

There are, indeed, an array of great dining options in the city along with plenty of cafes and bars. Costal Cultura Cafetera (Calle San Jose 4) is known for its well presented Mexican and Mediterranean dishes where octopus tacos are the speciality. Oajillo (Calle Carcamanes 17) serves a range of mains along with tapas. Its cocktails are the talk of the town and its roof terrace is an ideal spot for a sundowner. Furthermore, ice cream lovers will be in heaven at Estacion Gelato (Calle Cantaritos 29) where a wide range of tasty and unique flavours are on offer. There's a cute rooftop terrace too.

One of the city's most striking buildings is, without doubt, Basilica Guanajuato. Mexican Baroque in style, it is painted in vivid yellow, with red detail. The interior is no less impressive and is home to a jewel-encrusted image of the Virgin Mary, which was said to have been hidden in a cave for over eight hundred years. 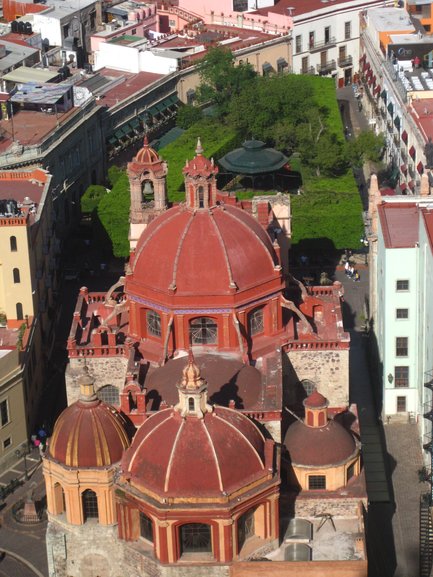 From 1865 to 1958, relatives of the city's deceased had to pay a grave tax. If they couldn't pay, the body was consequently dug up. As a result of the arid climate, the bodies had become mummified. Soon, the authorities had enough mummies to open a museum. Horrifically, many of the exhibits appear to have died in agonizing pain and there are even babies on display, not to mention a woman who had the misfortune to be buried alive. Indeed, it is a macabre museum and certainly not for the faint-hearted. 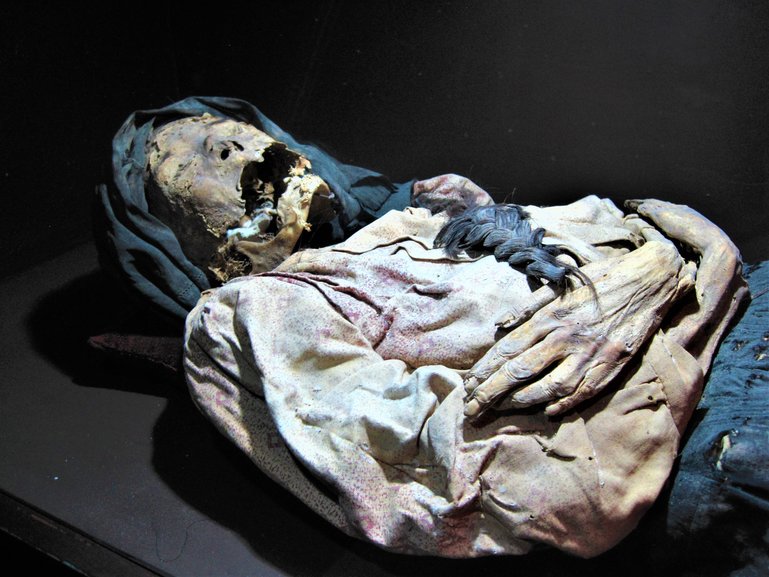 Guanajuato plays host to a wide range of festivals including the International Puppet Festival together with the International Short Film Festival, Dance of the Flowers, the Balloon Festival and the International Cervantes Festival. Additionally, the city puts on a flamboyant show for Day of the Dead with parades and altars along with an abundance of skeletons. Indeed, Dia de los Muertos is, in fact, an excellent time to visit the city.

The most pleasant months to visit Guanajuato are between November and March. It can be a little chilly at night, but on the other hand the day temperatures are perfect for exploring the city and additionally the skies are clear.

How to Get There

From Mexico City, there are direct buses from the airport and Terminal Central del Norte. The journey takes approximately five hours. The nearest airport is Bajio International Airport, which is around fourteen miles away from the city. 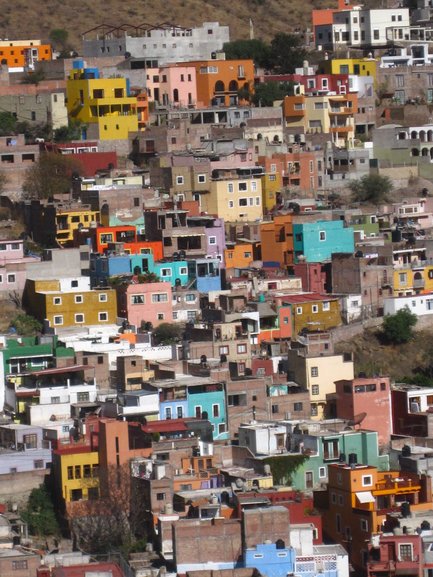