Welcome to an introduction to Queretaro, Mexico. We spent ten days in Queretaro last year and the city was something of a revelation. Queretaro is popular with Mexicans, but tends not to be on the radar of foreign visitors. As a matter of fact, when we were there, we saw very few other foreigners. Too bad for them, but great for us!

Not only does the city have a lovely historical centre, but it is well located for some great day trips. There are also several local vineyards and small towns to visit nearby. Additionally, transport links to the cities of San Miguel de Allende, Guanajuato and Merida are good. 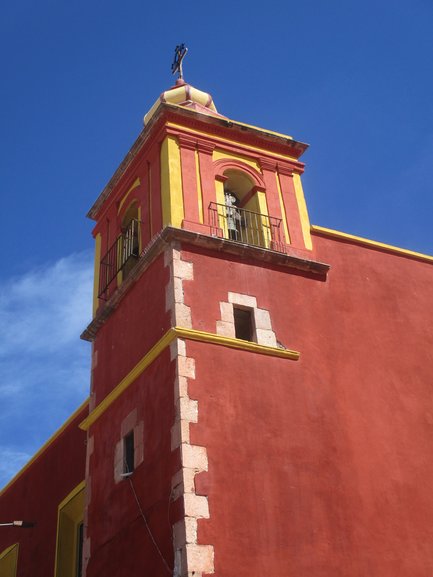 Go Back in time at the Calendar Museum

Although the idea of a calendar museum sounds somewhat dull, we loved it! MUCAL is set in a lovely courtyard where hummingbirds hovered. The old building has a wide range of Mexican calendars and artwork dating back to the 1920's. Additionally, there is a cute café in the peaceful garden.

Pay a visit to the Modern Art Museum

This impressive museum is housed in a 17th century convent. In the past, it has also been a prison and a school. These days, it is home to an array of contemporary exhibits, which are on display both inside and outside. It's definitely worth a visit for anyone who has an appreciation of modern art. What's more – entrance is free! 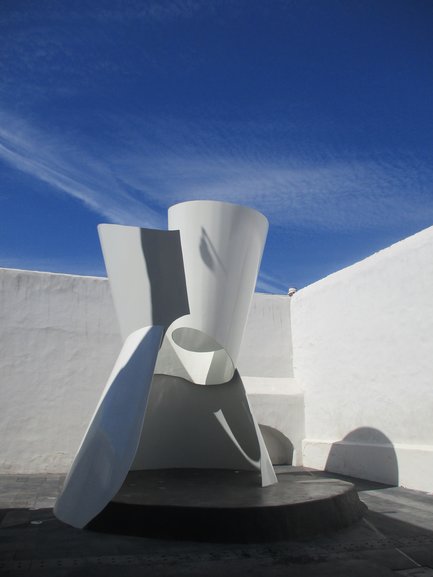 Explore the Historical Heart of Queretaro

The city offers some fine examples of colonial architecture. Due to its ethnic population over the years, the city has two distinctive sections. Within the first, are the alleyways which were inhabited by the indigenous people. The second are the avenues and plazas lived in by the Spanish settlers.
Queretaro's heart is home to a wealth of 17th and 18th century buildings and plazas. Additionally, there are also a number of statues scattered throughout the centre. One of our favourites were the Otomi Dancer next to the Templo de San Francisco. We also loved the sculpture of an alien-like figure by Leonora Carrington. 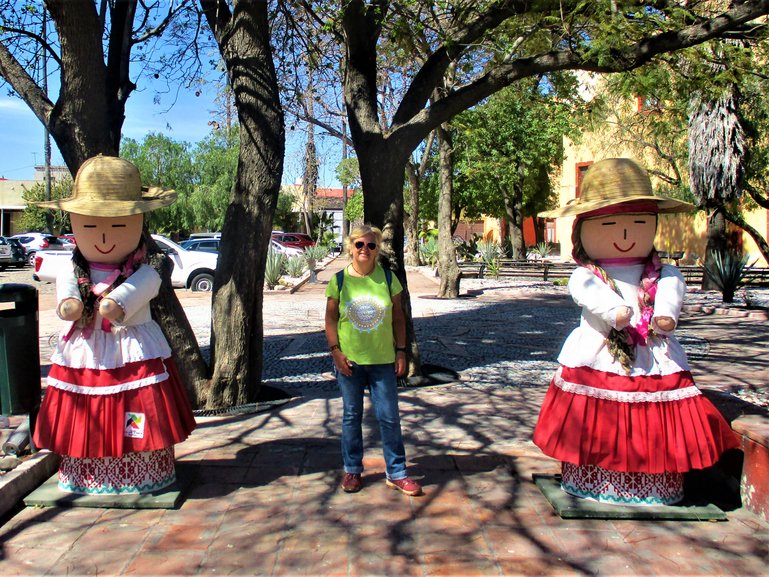 Take a look at the Roman Aquaduct

One of Queretaro's major features is its Roman aqueduct. Consisting of seventy-four arches, it was built between 1726 and 1738. The construction was completed by Chichimeca and Otomi indigenous workers. Its purpose was, in fact, to deliver clean drinking water to the city after locals became ill from drinking dirty water. The aqueduct stretches for 1.3 kms and can be viewed from many points across the city. The Hop-On, Hop-Off Bus, which leaves from the main plaza follows a route alongside the aqueduct.

Learn about Queretaro at the Regional Museum

This museum is located in a former convent. Built between 1540 and 1550, it features a courtyard and fountains, surrounded by arches on two levels. The building itself is beautiful, but it's also a great place to learn about the history of the local area. Exhibits include paintings along with sculpture, clothing and weapons. Additionally, there are pictures and documents on display. The museum is located in the heart of the city. 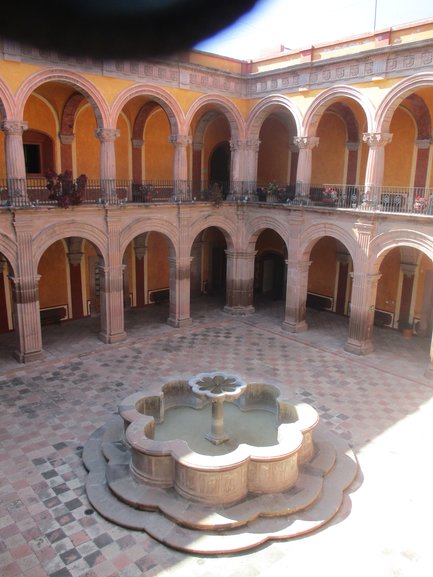 Browse in the shops and markets of Queretaro

Queretaro isn't a major shopping hub, but there are a few handicraft and gift stores to peruse. The most popular souvenir is the Otomi Doll, images of which can be seen all over the city. The dolls are sold buy indigenous vendors who wear traditional dress. They can be seen carrying basketfuls of the dolls as they wander through the streets. The local markets are also fun to explore and are especially lively at weekends.

Stroll around the Colourful Streets

There are colourful buildings aplenty in the city. From doors adorned with bougainvillea to buildings painted in hot pink or bright orange, the backstreets are fascinating. Another interesting feature were cars which matched the buildings they were parked in front of, almost like an art installation. Indeed, we weren't sure whether it was intentional or coincidental. It was, however, something we saw it many times whilst in Mexico. 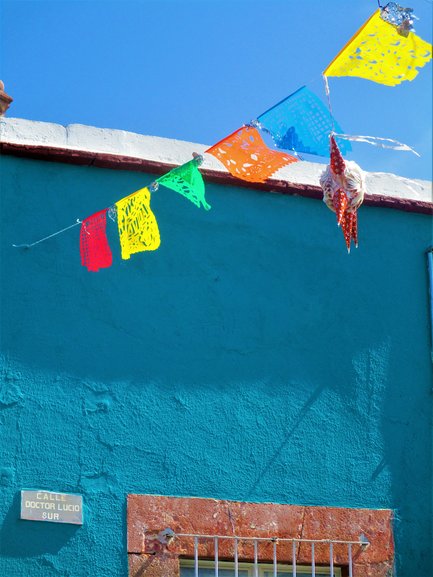 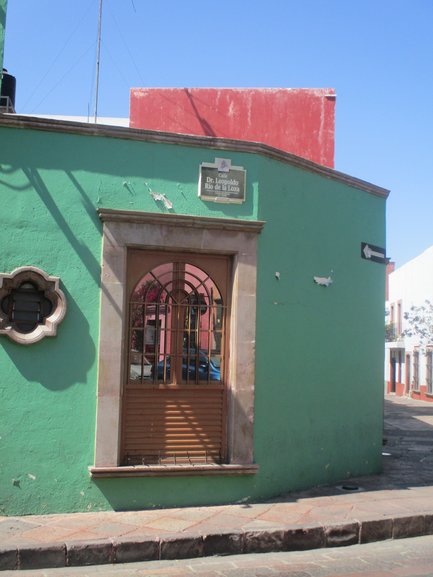 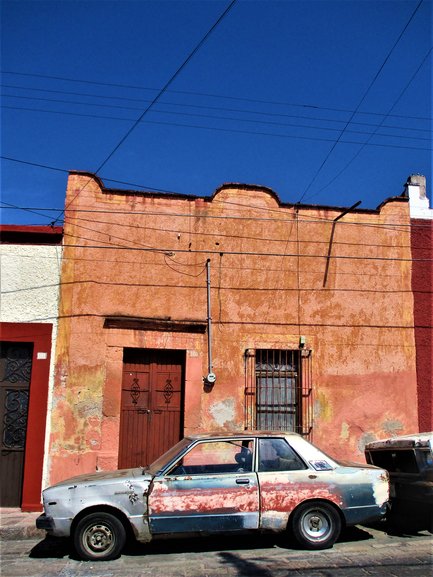 Have Breakfast at La Vieja Varsovia

This became our ‘go to' cafe. Although we usually had breakfast there, the restaurant is also known for its tempting wood-fired pizza. The dishes served at La Vieja Varsovia are creative, locally sourced and veggie friendly. The freshly baked bread was delicious and the coffee superb. There are tables outside on the plaza and it was a perfect place to people watch while enjoying a bite to eat.

How to get to Queretaro

Flights – There are regular flights from Mexico City to Queretaro Airport. Also, daily flights depart from Houston and Dallas. The airport is about 45 minutes by road from the city.
By Bus – Frequent buses travel between Mexico City and Queretaro. The fastest of these takes 3 hours. The bus is about twenty minutes from downtown.

Where to Stay in Queretaro

We stayed at La Hija del Alfarero Hotel Boutique. It's a good value mid-range hotel in the historical centre. The rooms, which are set around a courtyard, were clean and comfortable. Staff were friendly and there was a good restaurant on site.