“Just act normal, than you’re crazy enough already” [Doe maar normaal, dan doe je al gek genoeg] is a well-known Dutch proverb. We don’t like hysteria or the excessive display of emotions, unlike – for example – the Italians. We avoid putting on airs or using exaggerations that roll so easily out of American mouths. Where in other countries the highly successful are admired and adored, the Dutch generally look down on ‘them annoying showponies’. But the firmer we turn down the craziness, the warmer we embrace the exceptions… At those moments we’re culturally allowed to lose our shit once in a while, participating in activities and celebrations rather unusual to the foreign eye.

Typical Dutch Celebrations No Traveller Should Miss Out On:

The jollity kicks off straight away, right after you rolled into a brand new year. Still burping from the endless supply of ‘oliebollen’ (fried-to-shit dough balls with sugar the Dutch stuff their faces with on New Year’s Eve) and cheap champagne (we like to live it up a bit, but we like saving money even more) we jump into our bathing suits and orange-red-white-blue Unox* hats to run straight into the North Sea the morning after to beat the hammering hangover. But isn’t it mid-winter in January? Yes sir, yes it is. Gone are the days people run barefoot through a few centimetres of snow (climate change, Mr. Trump), but 7 degrees and that fierce western wind still requires the awakening of your inner daredevil.

* The event is sponsored by Unox, a super-duper-dutch brand producing local dishes such as ‘boerenkool met worst’ (mashed pot with sausage) and ‘snert’ (thick pea soup). The symbolic Unox hat in our national colors is probably the most iconic souvenir to take home… and free for all participants!

For this one you have to move a bit further down south, to the province of Brabant (Limburg has its own version of Carnaval as well, but die-hards only go for the ‘real deal’). Originally a catholic celebration right after the feasting period – hence the name ‘vastenavond’ = ‘feasting evening’ – Carnaval slowly turned into almost religious proportions on its own… during which stuff happens not one god could possibly approve of, mostly alcohol-related. A good thing to take into account is that during Carnaval every little village or town in Brabant changes its name and that of its citizens, related to local history. On top of that, every town has their own temporary leader (Prince Carnaval), songs in dialect and clothing style. A costume totally cool in one city, could be completely ‘not done’ in the next. But don’t worry too much about that, just go out 4 days in a row, watch the parades, dance with strangers of all age ranges and above all, drink as much as humanly possible. 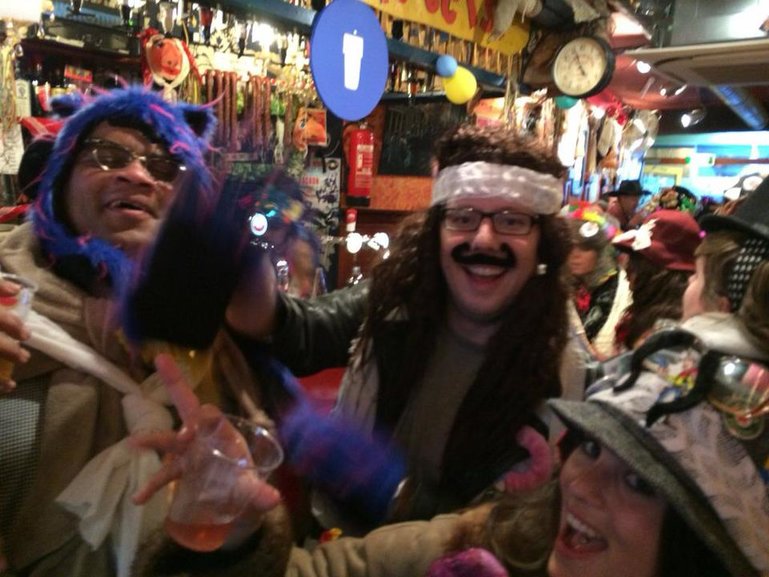 Not done with the drinking quite yet? Don’t worry, neither are The Dutch. The Germans might have their Oktoberfest, we created our own version in the shape of a ‘biercantus’, mixing loud singing of folklore with an extreme beer orgy. The concept is quite simple: There’s a big space with long wooden tables and benches, a band on stage to guide you through the songs displayed in little paper (soon enough beer-soaked) guides… and after finishing every song you down a full glass of beer in mere seconds. For about 20-25 times. Needless to say, the mood changes accordingly and odds are your night will be dotted with black outs. Personally I remember rolling my shirt up and sliding on my belly over a sequence of tables.

The good news is: there are several every year, just keep an ear on the ground in typical university cities (Tilburg has several). And don’t wear your cutest outfit, as the abundant throwing of cans of beer is an unwritten rule. 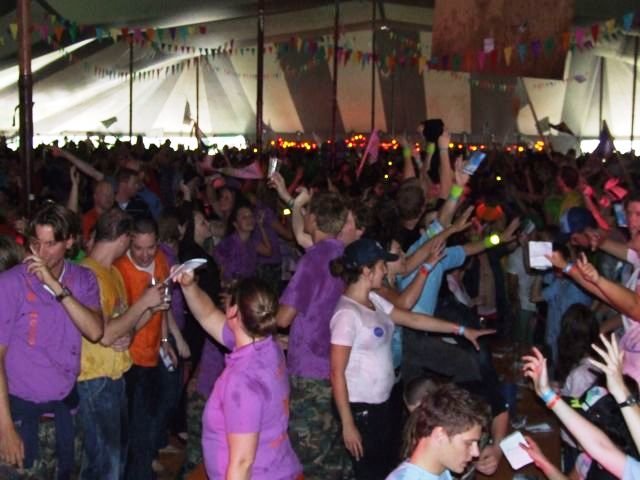 We love our king. Especially if we can make fun of him. Where in many countries mocking the leader indicates high treason, here satire relentlessly targeting the king and his family is part of every family’s Sunday television entertainment. Politically the royal family has neither power nor function, as we also have a cabinet, a First and Second Chamber, plus a Prime Minister… but symbolically their value is still going strong. If it’s worth the yearly input of 345,5 million euro’s of tax money I leave in the middle, but at least we are granted our Kings Day! Ornamented in hysterical orange* outfits we leave our house to join street raves and spontaneous festivals, or simply to sell our old shit on the sidewalk *(the ‘vrijmarkt’, free market, is the biggest national flea market that only takes place on this day)...*as every Dutchie likes a bargain. No one works, except the ones selling booze: King’s Day is a party day!
​
** Our royal family’s last name is traditionally ‘van Oranje’, passed on through both the male and female line since our first king Willem van Oranje. Oranje, the Dutch word for the color ‘orange’, therefore functioned as our national color, next to the color-combination of our red-white-blue flag. [Yes, that’s indeed why our national soccer team has orange outfits.]* 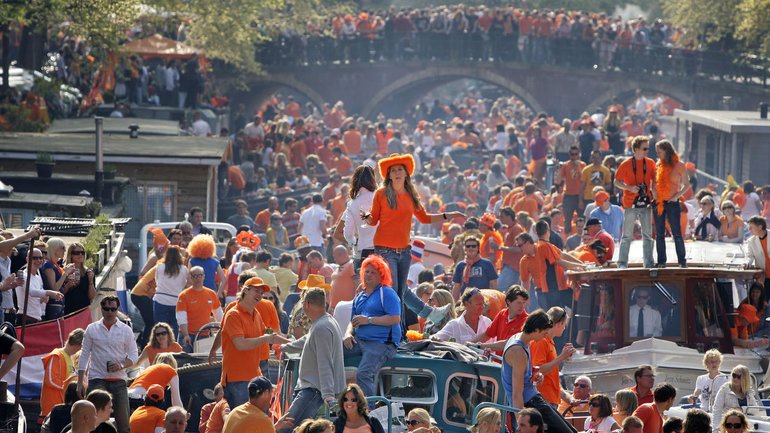 The stronger the UN debates the symbolism of our main national children’s celebration, the fiercer the stubborn Dutch defend it. Don’t fuck with our Sinterklaas! Truth told, it is quite complicated to explain it to a random foreigner and maaaaaaaaybe our prior practice of colonialism has something to do with it (‘apartheid’ is a Dutch word), but racism is a concept only understood by adults. No child who thinks in skin color or nationality, or even goes as far as giving some kind of meaning to it… that’s a rottenness only learned in the course of adulthood. To me Sinterklaas (short for Sint-Nikolaas: Saint Nicolas) has always been that kind old man yearly arriving on his steamboat from Spain (?) with his jolly companions the Zwarte Pieten (Black Petes), walking over the rooftops on his white horse Americo while dropping gifts through the chimneys and filling the shoes of children that have been good that year with sweets… and so thought my friends born out of African parents, as even they could see they looked rather different from whatever Black Pete symbolized.

Sounds rather familiar? That’s correct, Santa Claus is shamelessly pirated from this Dutch folk hero in both name and image. Only the horse is replaced by reindeer, the rooftops for the sky and Black Pete by elves… Ahum, United Nations, time to defend the rights of midgets in our era of easily-offended victims, I’d say! ;) 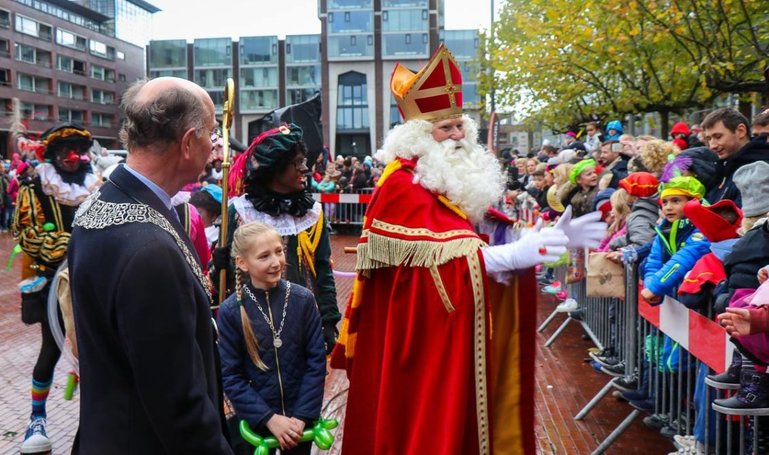 One Day Trip to Utrecht, Netherlands