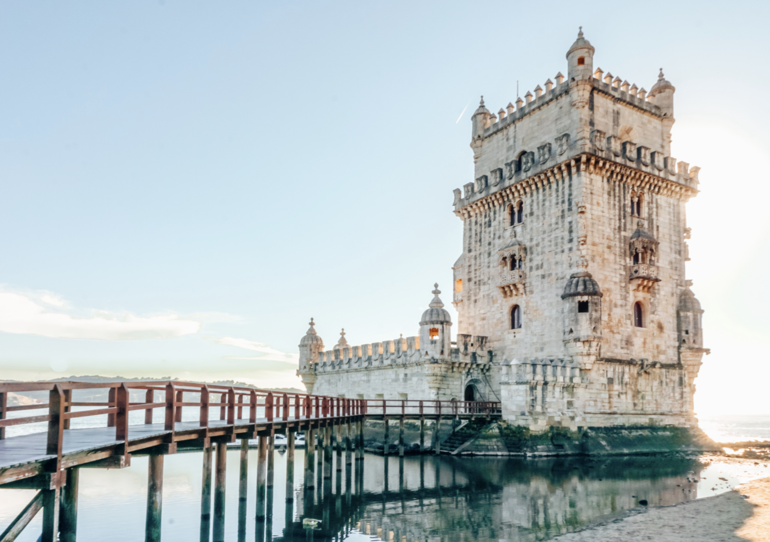 If you would like to venture a little bit further out of central Lisbon, the district of Belém is a perfect getaway from a city life. It's located 7 kilometres south-west of Lisbon's centre, at the mouth of the River Tagus.

It was from here that Vasco da Gama set off for India in 1497! Belém’s great maritime history, national monuments, museums and riverside location make it a place you can’t miss.

It also feels like a breath of fresh air, because it’s filled with parks, green plazas and open spaces, such a nice change from busy city life.

And I can’t not mention pastéis de Belém that are a must-eat while you’re there!

How to get there

All you need to do, is jump on the tram 15 (or E15) that runs from Praça da Figueira, thorough Praça do Comércio and Cais do Sodré all the way to Belém. It runs every 10 to 15 minutes and the ride takes about 25 minutes from Praça da Figueira. The best place to get off is at the Jerónimos Monastery stop (Mosteiro dos Jerónimos) and that walk to see all of the attractions.

But beware of the pickpockets, as they are very often target tourists on this route!

The best option is to pay the €3.00 fare by using the Viva Viagem Card or the Lisboa Card (with the Lisboa Card you can travel for free on all transport and it will give you a free or discounted entry to many attractions in Belém and Lisbon too!)

What to see and do

Quite a few of the sights are closed on Mondays and many are free on the first Sunday of the month, so double check before going and plan away! 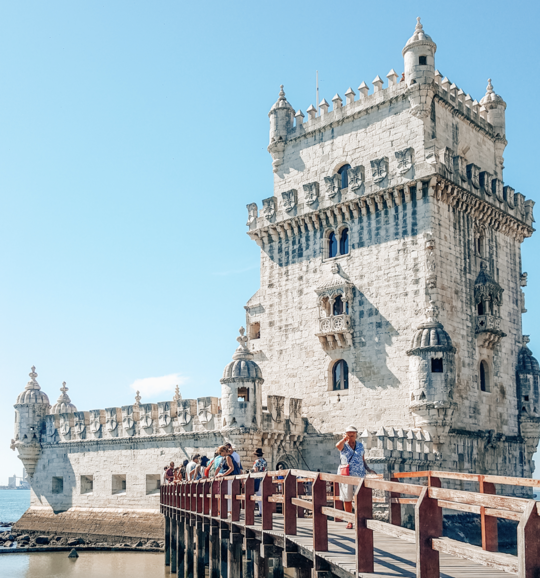 It is the most known attraction here and a symbol of Lisbon and the Age of Discovery. It is listed as UNESCO’s World Heritage monument as well.

Built in 1520 as a fortress to defend the mouth of the Tagus River, years later the tower was transformed into a lighthouse and customs house. At that time it was stood in the middle of the estuary, but time and tide have shifted the river’s course since and now it sits close to the river bank.

It is a beautiful example of the Manueline style (created during the reign of King Manuel I), incorporates many stonework motifs, ornate balconies and a gargoyle of a rhinoceros – it was Europe’s first recorded evidence of the existence of a rhinoceros (!).

You can of course go inside (bear in mind that there is a limited number of people allowed to enter so it is advisable to make your way there as soon as the tower opens). A tour takes you from the lower battery, which served as a magazine and a dungeon, to a top terrace where you get a breezy panorama of Belém.

The admission to the tower costs €6 for an adult and €3 for a concession. You can also buy a combined ticket here for the Tower and Jerónimos Monastery to skip the line at the monastery later. Tickets can be purchased online on the tower’s website. 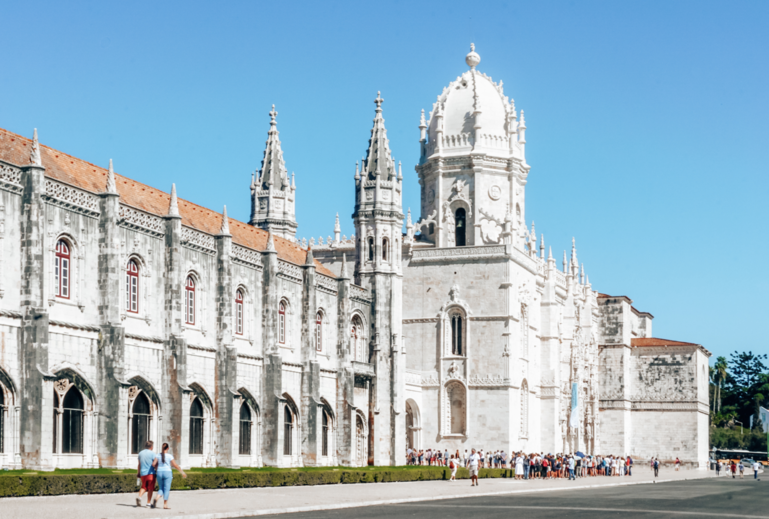 It is a spectacular religious building that was historically associated with the early sailors and explorers, Vasco da Gama spent his last night there before his voyage to India.

Construction on it began in 1501 and lasted for a hundred years. The Jerónimos Monastery’s church and the two-story cloister are considered the greatest examples of Manueline architecture in the country, and the decorative ornamentation and symbolism are breathtaking.

The entrance fee for the monastery is €10.00 for an adult, €5 concession, and you can purchase your tickets here. 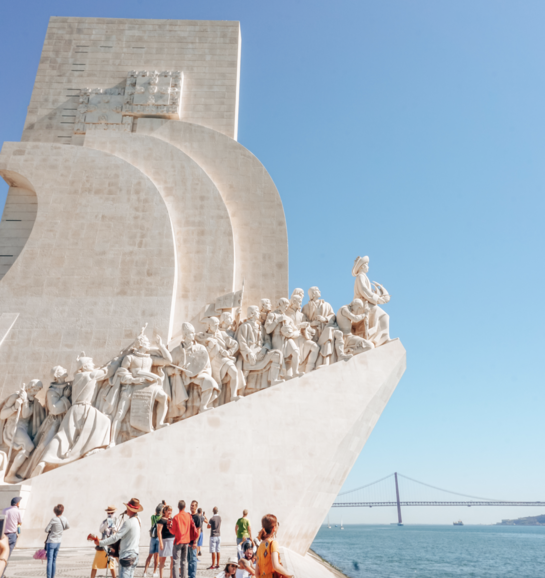 While by the river bank you simply can’t miss this 52-metre high monument. It was built to commemorate the 500th anniversary of the death of Prince Henry the Navigator, one of Portugal’s greatest discoverers.

It represents the prow of a caravel (a small sailing ship) with sculptures of important historical figures such as King Manuel I, Luis de Camões, Vasco da Gama, Magellan and several other notable Portuguese crusaders, monks, cartographers and cosmographers.

To see Belém from above you can visit the observation deck on top of the monument, that also overlooks a magnificent marble mosaic of a compass and a world map. It is 50 metres in diameter and was a gift to Portugal from the Republic of South Africa.

It costs €6 or €3 concession, for online tickets visit this website. 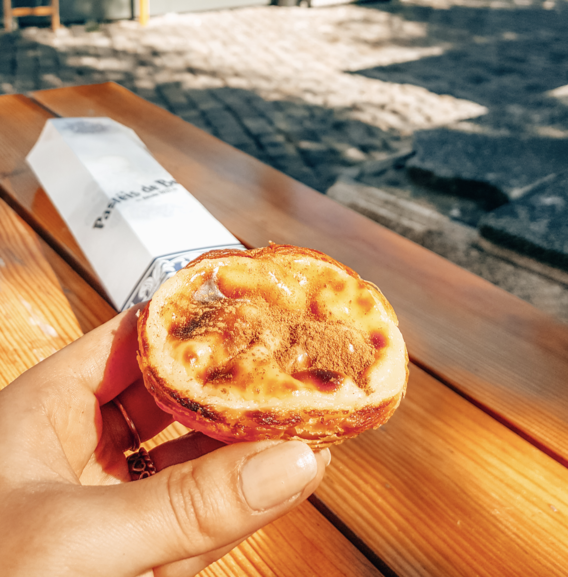 You can’t leave Belém without trying their famous pastéis de Belém! You might have heard about pastéis de nata – a typical and delicious Portuguese egg custard tarts, you can buy them everywhere in Portugal.

But Belém ones are considered to be the original and the best and you can buy them only there. So head to the Fábrica dos Pastéis de Belém, the shop that invented that mouth-watering dessert in 1837 and still makes them following the original (secret!) recipe. You can either sit in or queue up to grab a box to take away. I have to say it was my favourite thing to do in Belém 😀 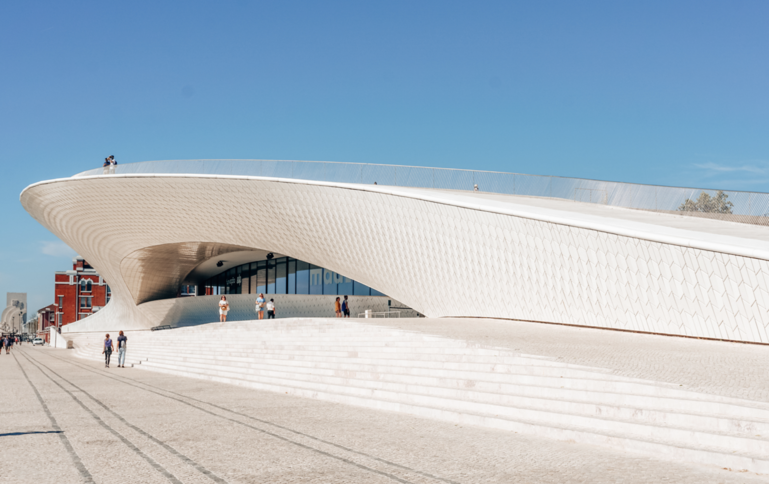 And if you walk along the riverside back towards central Lisbon you can admire this impressively futuristic building. You can walk across the roof (for free) to enjoy some are stunning views of the 25th April Bridge and the river.

If you’d like to visit the museum and its many exhibitions the entrance fee costs €5, concession €2.50 and it’s free for all visitors on the first Sunday of every month. 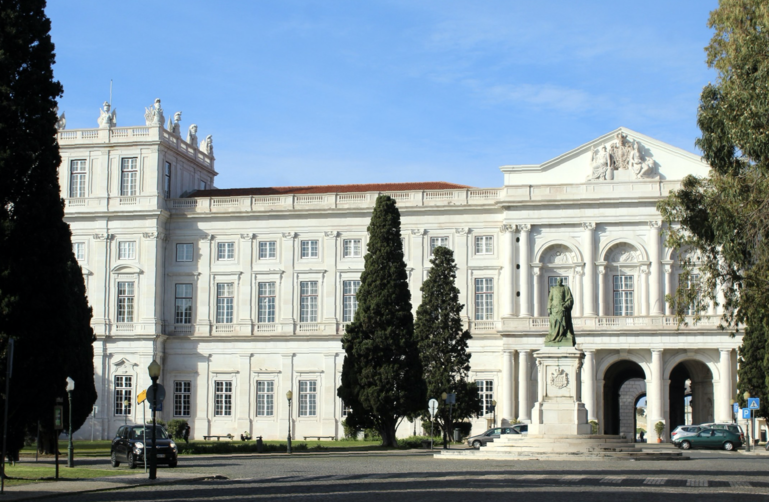 The Palace of Ajuda was built over a temporary wooden palace constructed for King Joseph I of Portugal, who had developed a fear of sleeping in stone buildings after the 1755 earthquake, which had devastated the capital.

Its construction was delayed at numerous stages due to economic or political strife in Portugal and only became the official residence of the Portuguese royal court 150 years after the initial construction. The Palace of Ajuda then served as a royal residence until the end of the monarchy in 1910.

In 1968 it opened to the public as a house-museum and since the eighties has grown to be an outstanding museological institution.

The lavish rooms have now been fully restored. A walk through the palace reveals the life of absolute luxury enjoyed by the royal family in the 19th century.

The palace is regarded as being in Belem but is quiet a walk from the other tourist monuments and sights and requires a walk up a steep hill. The best is to go there by tram or bus terminating close to the Ajuda Palace. (Bus 727, 729, 732, tram 18).

The palace is open for visits from 10 am till 6 pm every day, except Wednesdays and Thursdays. The entrance fee costs €5.00 (concession €3.00) 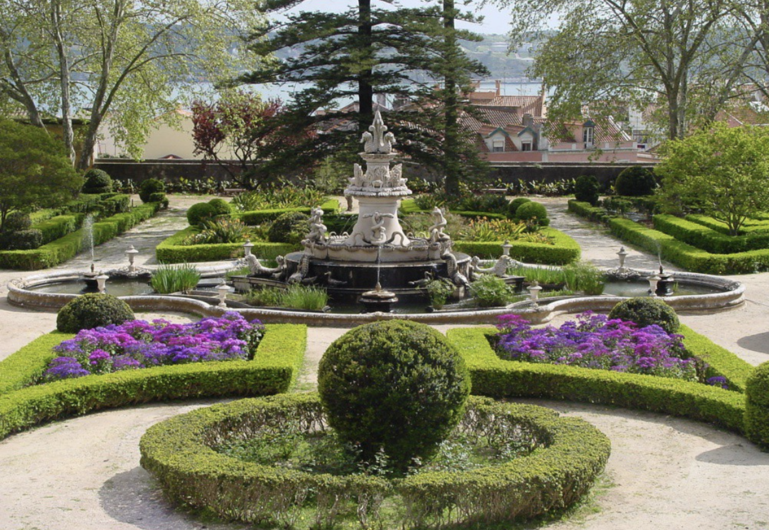 It is the oldest botanical garden in the country, laid out on two levels in 1768 as part of Ajuda Palace. There are plants from several of Portugal's former colonies and some centuries-old tree. It is a very elegant place too, with statues and a Baroque fountain decorated with serpents, fish, sea horses, and mythical creatures.

The grounds are laid out in a grand geometric plan with manicured hedges, low walls and ornamental fountains. Peacocks stroll through the garden which is also now a natural habitat for other urban creatures in Lisbon.

You can also admire some grand views over Belem, the Tagus River and the 25 de Abril Bridge. 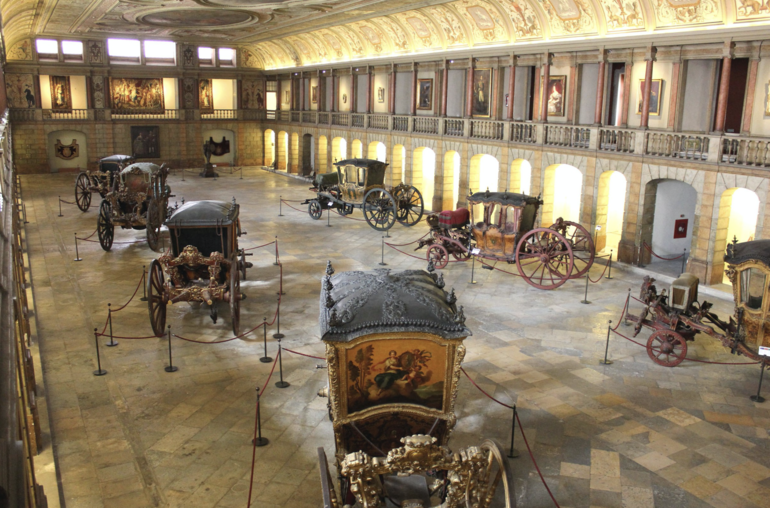 This museum exhibits one of the most important collections in the world - royal horse-drawn carriages. You can admire these wonderfully decorative carriages from many centuries, including those used by European royalty.

The museum has two buildings - the main collection is presented in an ultra-modern complex. The second, smaller collection, is on show in the formal royal arena.

Belém is a great destination for a day trip from Lisbon, but if you have more time to spend there, you will have more than enough things to see and do!