The Pamban Bridge in Rameshwaram

After an awesome time in the valleys of Kashmir, I was on a bus with my childhood friend to spend the weekend in the lap of our cultural roots, and around the magnificent architecture of our Indian Railways. Pamban bridge is a 2.1 km railway bridge connecting the town of Mandapam in Mainland Bharat with Pamban Island, and Rameshwaram. The bridge has a double-leaf bascule section that can be raised manually to let ships and barges pass. The longest and India's first vertical lift railway sea bridge is worth seeing once in your life.

I would love to describe this place as mesmerizing, the wow views, the exemplary architecture, the vital rail link, the awestruck man-made creation, surrounded by the breathtaking views of the vast sea, the clean and teal blue waters would be the best adjective to say about this south-eastern coast of Tamil Nadu, India. In other words, Adam's Bridge or Rama's Bridge or Ram Setu, all is one which was created by Lord Ram and his Vaanar Sena or army 7000 years ago. In this post, I will be writing down my experience of Rameshwaram and the last land of India, Dhanushkodi. This article promises you to give a complete idea of this place, and it will surely help you if you are planning to visit this place anytime. And yes, attaching the spectacular views for a treat to your eyes.

I and my friend decided to meet at a commonplace that is Chennai for us as we wanted to see a sunrise in Chennai thought we could have met in Madurai, but we preferred Chennai as one was traveling from Bangalore, India and the other one was traveling from Vijayawada, India. So, we met early morning and we decided to see the sunrise on one of the nearby beaches from our meeting point. We spent our beautiful morning with a beautiful sunrise, talking about our childhood, our traveling plans, and of course, we took our photos as well. It was a beautiful start to our journey.

And after finishing this drill, we had our breakfast and moved ahead towards the bus stand to start our real travel itinerary. But as soon as we reached, we got to know that the morning bus is canceled, and the other buses were either taking a long time, or they were non-ac buses in which we were not comfortable with. So, we decided to spend the day in Chennai, India, and take a night bus, so that we can reach the early morning, and can start our travel hopping. We booked the hotel, took a rest for a while, and then started traveling locally and by the time we finished local sightseeing, it was time to catch the bus to reach our actual planned location.

After the night spent on the bus, we reached Rameshwaram finally. It was a long yet eye-pleasing journey, coconut trees around, surrounded by the vast sea, boats floating in the sea, the clear blue sky, and our sudden realization that we are on the Pamban bridge, it was an incredible feeling.

Dhanushkodi Road was an empty road with zero traffic and dunes all around justifying the word abandoned and beautiful at the same time. You know why because we humans destroy beautiful things, and it is good in this way only because this is untouched, and that is why its beauty is still intact. After the massive cyclone, this place was having a church without devotees, a railway station without travelers, and a school without students.

Dhanushkodi, the last land of India has mythological importance and suffered catastrophic destruction in 1964, due to a cyclone that washed away everything in the city and the remains can be still seen. It is said that Lord Rama and his vanara sena together built a bridge using floating stones to reach Lanka to rescue Sita from Ravana. And after returning victorious from Lanka, Vibhishana, the new king asked Rama to destroy the bridge. So, Rama broke the bridge using one end of the bow, giving the place its name, Dhanush means bow and Kodi means the end. 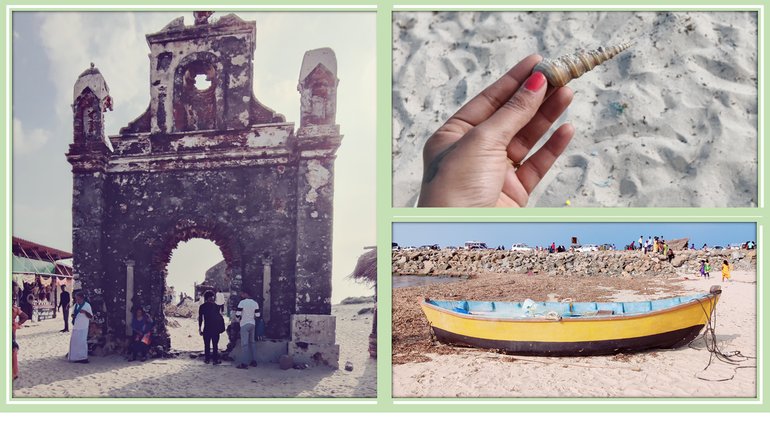 The Remains of Dhanushkodi

We spent an hour or two sitting on the stone, gazing at the giant ocean, feeling of that sea vibes, the cool breeze just gave an extra chill to our mind and soul. While we were having our discussion on our life goals, we were also enjoying the coconut fritters and fruits to keep ourselves hydrated. A 30-min journey from Rameshwaram took us to the place where all our thoughts came to a standstill, and we started conversing with the surroundings in a silent language of our own….

And then we realized that it is getting late and as per the directions of the Indian Navy and Tamil Nadu Government, no one can be there after sunset, so we left the place with lots of memories, happy vibes, and a beautiful sunset.

Reach Rameshwaram first, book a cab or taxi as Dhanushkodi is 18kms away from Rameshwaram. 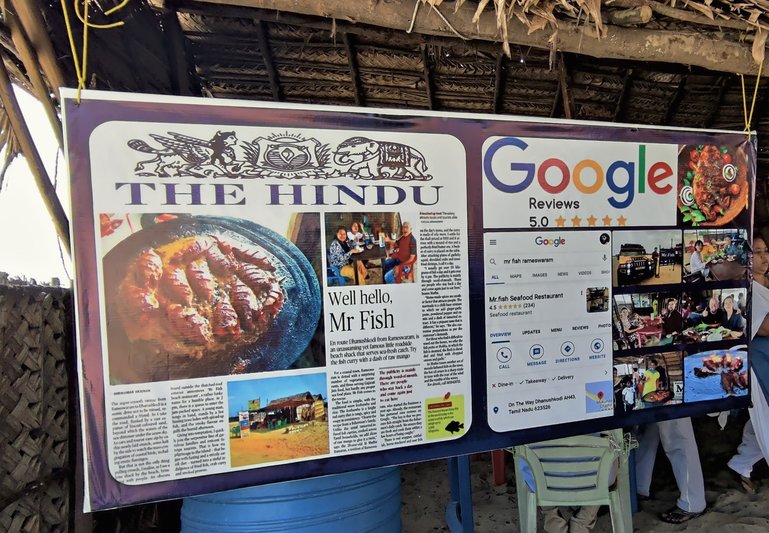 Mr.Fish Cafe on the way to Dhanushkodi

We came back to our hotel in Rameshwaram, and after some time, we decided to go to Ramanathaswamy temple. We were awestruck seeing the beauty, the Dravidian architecture of the temple which is one of the very few in India and is also called the second-largest pillar corridor in the world. It is a must-go place and should be included in your list of places to go in Rameshwaram.

And the day was over and so our energy. To know what happened on the second day, continue reading….

And the day begins, we check out the hotel, had our breakfast, and started our journey to see the beautiful Pamban Bridge. The road was serene, peaceful with a lot of visitors, bikers, and families. The Pamban bridge was on one side of the road offering you uninterrupted views of the azure waters, and the other side of the road was filled with a flock of ships. The ocean was very vast, very clean with crystal clear water. It is India's first vertical lift railway sea bridge connecting Rameshwaram to the mainland. We were gazing at the exemplary architecture with our eyes wide open, and we took a long drive on that road to enjoy that scenic experience. 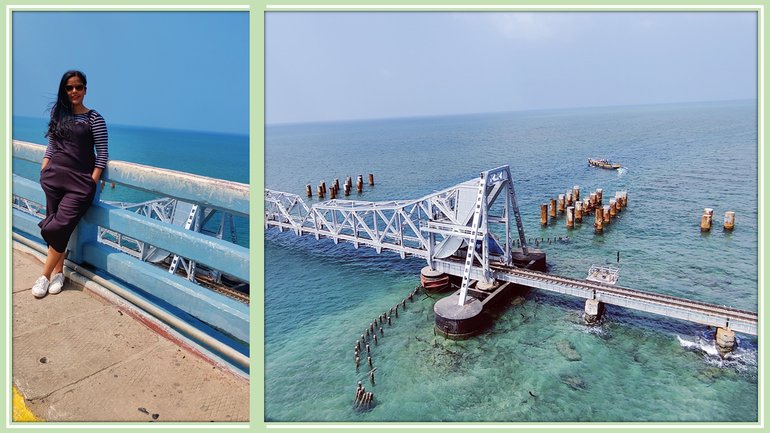 A muct pic when you are in Rameshwaram

After finishing our long drive, we halted in a place to have our lunch, and then we headed towards Panchmukhi Hanuman Temple where the idol of Lord Hanuman has four other heads, the statue is smeared with Sindoor and worshiped by Hindus with a complete devotion along with the idols of Rama, Lakshmana, and Sita who also have shrines here. The best part about this temple is they have the floating stones here on a display to prove the legend of Rama Setu across the sea to Lanka. 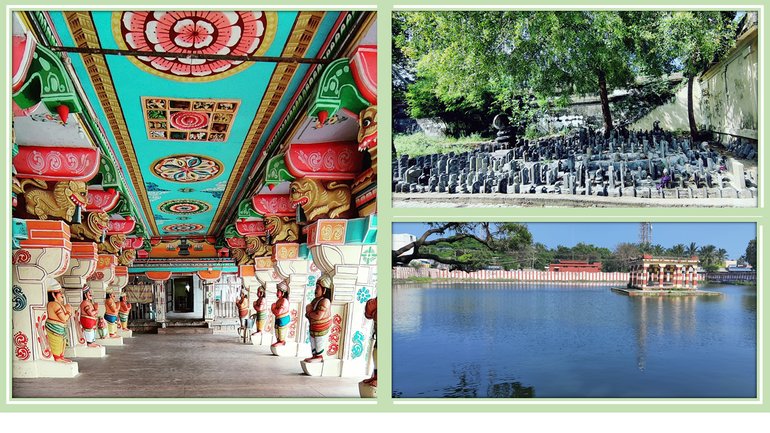 The beautiful temples of Rameshwaram

And then we also visited a couple of other places named Nambu Nayaki Amman Temple, Lakshman Tirtham, Arulmigu Ramanatha Swamy Temple, Nataraja Temple and the last one was Kalam National Memorial which was built in the memory of India's great Leader and renowned Scientist Dr. APJ Abdul Kalam, but it was closed due to COVID-19.

After vising all these places, we were tired and hungry, and we wanted to rest but our bus booked was in the night, so we decided to go to a café and sit quietly and have a cup of tea. So, we ended up in Hyatt café which was just 1 km away from the bus stand where our driver cum tour guide dropped us in the last. While we were having our tea conversation, I decided to write about all these experiences of mine, and my friend was planning for the next trip, I think this is what travel does. We happily got on the bus, reached Chennai, from there we parted ways, promised each other that we will travel soon together. And this was our story.

Book a train ticket from Chennai to Rameshwaram Railway Station as it is 590 km away from Chennai, directly connected and various kinds of trains are also available from here of such as superfast, express and the local trains.

Road trip is always fun, exciting, and refreshing, we could have booked a cab from Chennai to Rameshwaram but due to budget crunch we chose the bus as a mode of traveling, but honestly, we enjoyed this a lot as we got ample of time to talk on an ample number of things.

A female solo traveler. Based out of Bangalore, India. I started traveling solo as it was in one of my to-do buckets lists. In the beginning, it was difficult for me to travel due to the money crunch and my money management problem but slowly I realized that I do not need materialistic stuff because it is not going to give me that feel and peace which my soul needs it. And then, I started cutting off all the unnecessary expenses, and then I was able to save some money to travel. And that is how I started traveling. I travel light and I prefer to stay in budget accommodation but that should be safe for a solo traveler. I take time to know the ... Read more