Bratislava – What to See on A One Day Trip 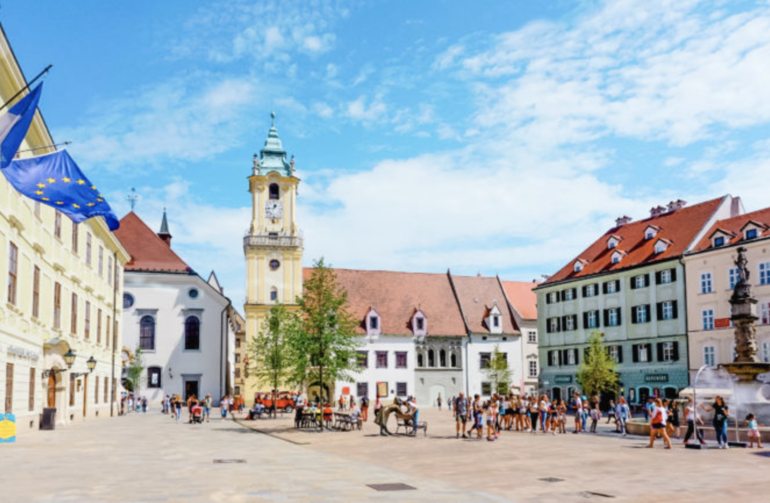 I visited Bratislava in 2016 and it was only a short stop on the way to Budapest. And even though I spent only a couple of hours there, it was just enough to see the most important things in the city and be completely infatuated with it.

A medieval old town, baroque palaces of the Hungarian nobles, the Renaissance castle and the recent additions of trendy cafes and boutiques created a perfect destination for day-trippers or a quick stop on the way to another European destination.

Take a walk around the OLD TOWN 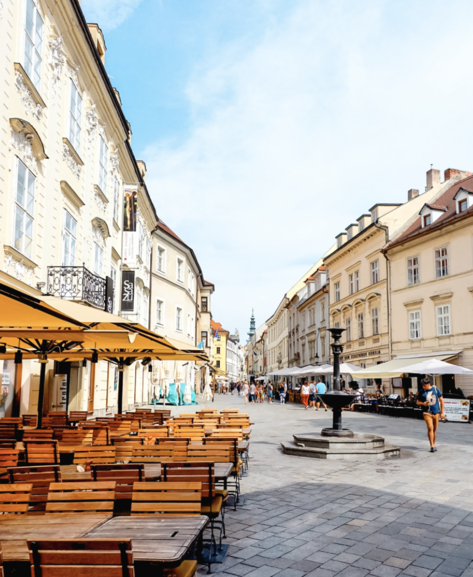 One of the streets of the Old Town

The Old Town is Bratislava’s historic centre and the prettiest area, filled with narrow streets, baroque architecture, and fairytale churches and palaces.

One of the best things to do is to simply walk around and admire the surroundings. It takes roughly 10 minutes to circle it, so without rushing you can enjoy the sights, shop for souvenirs and even sit and grab a coffee in one of many lovely cafes.

Hlavné Námestie is the Main Square in the Old Town with many colourful houses surrounding it. It’s the epicentre of social life in Bratislava, especially in the summer. 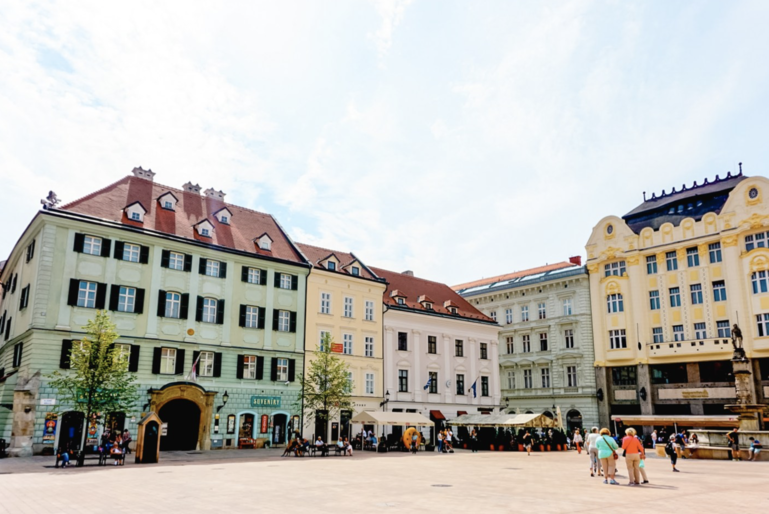 You can admire the architectural beauty in almost every direction!

In the middle stands the beautiful Roland’s Fountain, put up in 1572 as a public water supply. According to a legend, the statue of a knight (standing on the top of a 10-metre high column), can be seen bowing every New Year’s Eve. But that’s visible only to the most good-hearted Bratislavans! 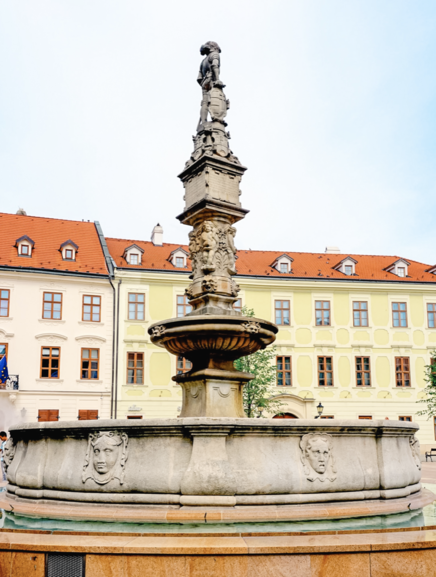 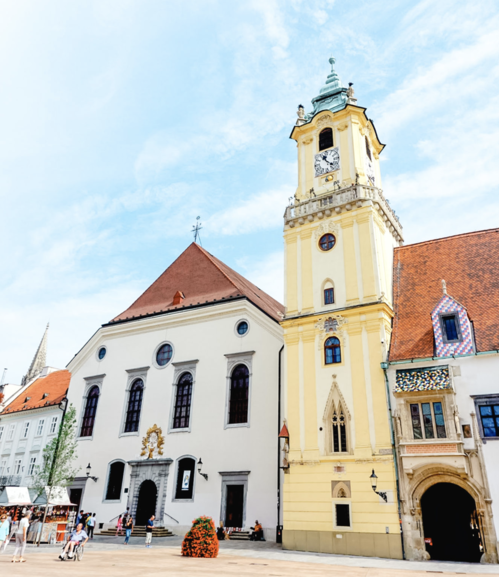 It is home to the Bratislava City Museum, the oldest museum in Slovakia. It displays the city’s history, armour and torture devices.

And if you fancy, you can climb up the narrow stairs leading up the 45-metre-high tower. You will be rewarded with beautiful panoramic views of the Old Town! 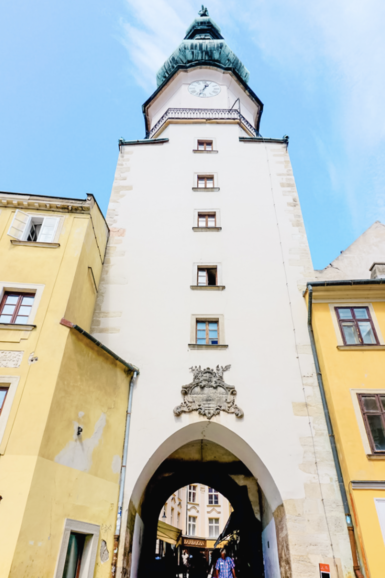 You can enter the Old Town through the only still standing medieval gate of the city fortifications, St Michael’s Gate (Michalská brána a veža). It is 51-metres high, with a statue of the archangel Michael slaying a dragon on top. It also contains a military museum.

You can also climb the tower to get the views of the city’s streets. Entrance is via the Museum of Arms (look for the replica cannon at ground level).

On the street that passes through the gate you will find the so-called “*zero kilometre*” (or “*zero point*”) plate, listing the distances of 29 world capitals from Bratislava. 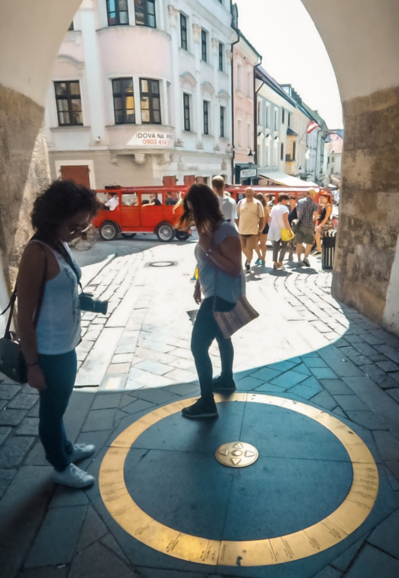 A few steps from the Main Square, on the Primate Square (Primacialne namestie), you can find a lovely pink-shaded neoclassical Primate’s Palace(Primaciálny palác). When you walk in, you will see huge tall pillars in a hallway, leading you to a small courtyard with a fountain and a statue of St George. The statue pictures him slaying a three-headed dragon.

The palace is open to visitors and you can see, among others, the famous Hall of Mirrors and a collection of 17th century English Gobelins.

Opening hours are 10 am to 5 pm, Tuesday to Sunday and the tickets cost €3.

Take photos with the QUIRKY STATUES

Around Bratislava’s Old Town you can find a few lovely statues and sculptures paying homage to the city’s past. And taking photos with all of them is a very popular activity among tourist.

Located on the corner of the Main Square this one is of Lamár Ignác, nicknamed Schöne Náci. He was a beloved figure during World War II and years after. 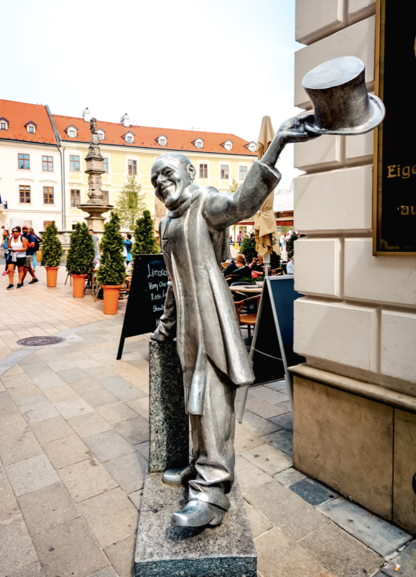 At a time of trouble and depression, Ignác inspired happiness in people around the city through his cheerful manner and joyful greetings.

Another one is Man at Work (Čumil the Peeper), a bronze sculpture of a communist-era worker clambering out of a manhole.

You can find him on the corner of Panská and Rybárska Brána, just a few steps from the main square.

There's also a statue of a Napoleon’s Army Soldier, located in the main square. You can sit on a bench and take a selfie with it!

It’s officially known as the Church of St Elizabeth of Hungary but, for obvious reasons, it’s commonly referred to as simply “*the Blue Church*” (Modrý kostolík).

Both the interior and exterior of the church are painted in shades of pale blue and beautifully decorated with mosaics. Even the roof is tiled with blue-glazed ceramics.

Built in the early 20th century in the Art Nouveau style, it is smaller than most European churches. It takes between 10 to 15 minutes to walk here from the old town.

Walk up the hill to the BRATISLAVA CASTLE 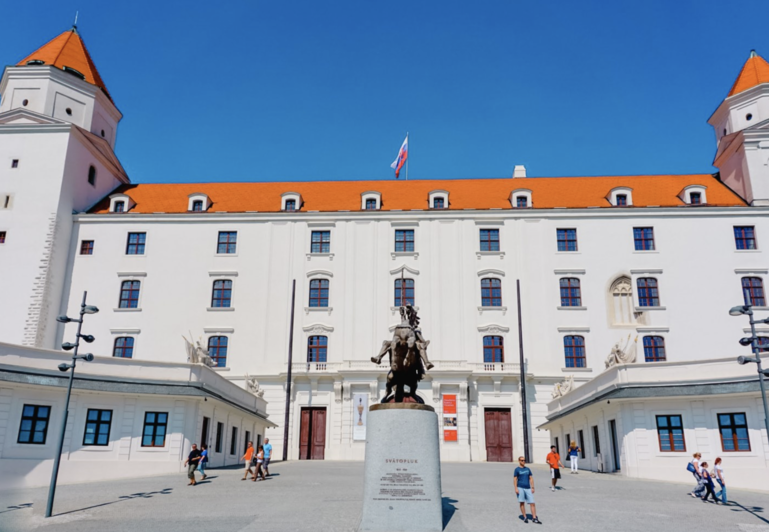 It’s easy to reach by foot just a few minutes to the west of the Old Town.

The castle is a boxy four-towered rectangle with the inner courtyard. It is a 1950s reconstruction of Emperor Sigismund’s 15th-century castle, which burnt down in 1811.

There are two museums inside: the Slovak Historical Museum (Historické Múzeum) and the Music Museum (Hudobné múzeum).

The oldest original feature is the 13th-century Crown Tower, which you can also climb for bird’s-eye views. The 47-metre-high tower used to hold the royal coronation jewels.

Inside the grounds, you can walk around the gardens, explore the on-site history museum and look out upon the landscapes surrounding the city. On a clear day you can see Slovakia, Austria and Hungary!

Without a ticket, you can wander the well-kept baroque gardens behind the castle.

Otherwise, an adult ticket to go inside costs €10 (concession €4).

Here you have a couple of delicious options to look for:

Bratislava is such a compact city that it's possible to fit a lot of sightseeing in in one day. So I would definitely recommend it for a quick or long visit, as it still seems a bit underrated!

How to Choose Between Visiting Vienna, Prague, Budapest Or Bratislava

UFO Observation Deck in The Capital of Slovakia 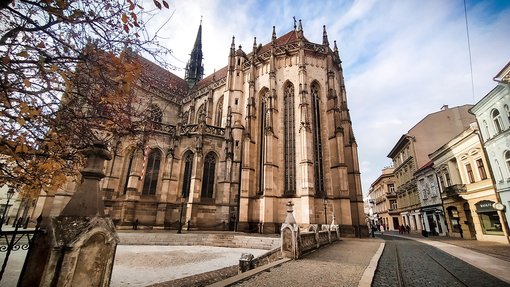 Forget Bratislava, Košice Is The Real Reason You Should Visit Slovakia!