A trip to Europe without visiting the Gosausee is a trip wasted. 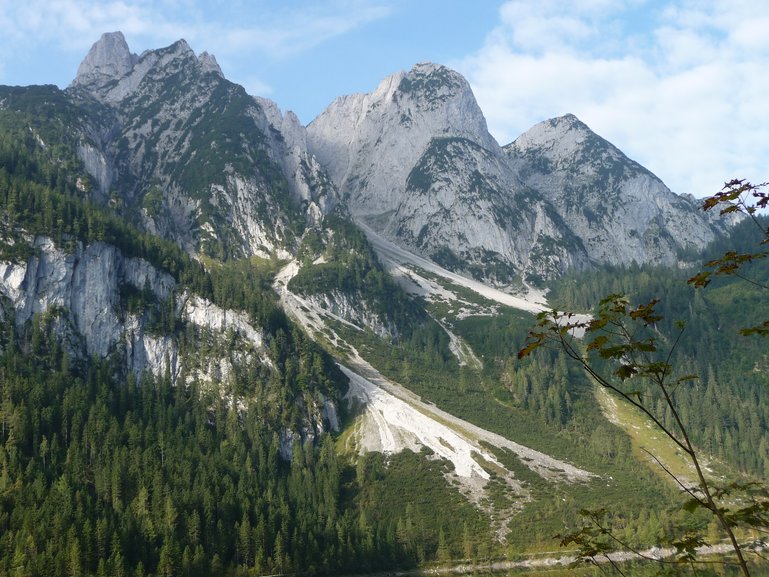 The bottom line: One of the most scenic spots in the Alps, especially in the late afternoon until dark.

We went to see Lake Gosau because the Michelin Guide gave it the maximum three stars. Did they ever know what they were doing! Technically, I should call this Gosauseen – the Gosau Lakes– which are a string of small Alpine lakes near the top of a small valley on the northwest corner of the Dachstein, but the largest small lake, the Vorderer Gosausee, is the star of the show, but its name is a mouthful, so we simply call the Gosausee (goss-ow-zee).

The Mighty Dachstein, an expression we found so often in travel literature on the Austrian Alps that it became a cliche, is a massif, the predominant mountain feature of the Alps. A massif is a large block of rugged interconnected peaks surrounded by long valleys. Massifs are often named by their highest peak, like the Mont Blanc Massif. Circumnavigating the Dachstein Massif is a trip of 166 miles, and deserves 2-3 days to take in the sights along the way. 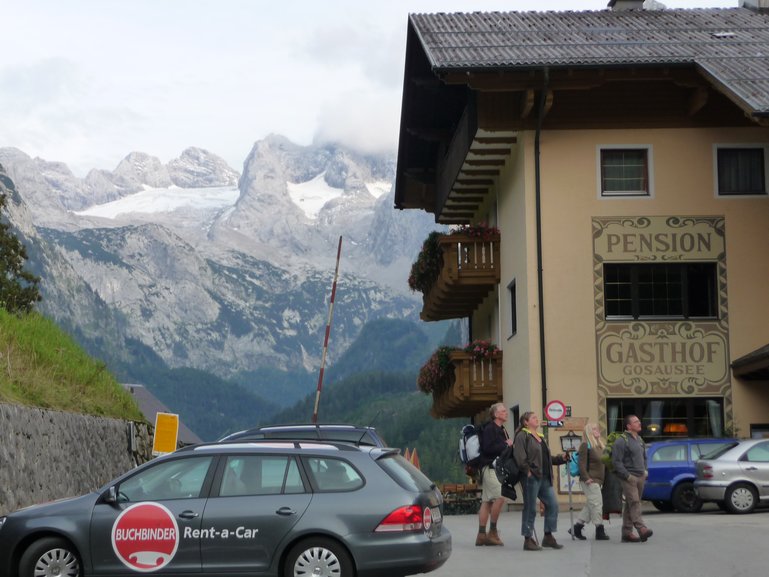 The little Gosau valley starts in a crack in the side of the Dachstein Massif. The small glacier fed stream running down the valley widens in spots into a strikingly pretty string of lakes. The last and last largest (the first you come to by road) is the most stunning, a semi-natural lake enlarged by a dam. The view from the large terrace by the dam is unforgettable, at least until you take the walk around the lake.

The are two must-do walks:

1] Circle the lake at the dam. This takes about one hour.
2] Then walk upstream to the Hinterer Gosausee, or continue a short way further to the end of the valley. About two hours.

Both are easy walks. The trail to the Hinterer Gosausee gradually climbs about 600 ft.

The trails are well marked. The Hinterer trial runs along the bubbling mountain stream with rapids and small waterfalls and small lakes at every twist and turn.

There is also a tough day long climb up 4,000 ft. from the Hinterer Gosausee to the Gosau Glacier. We skipped that one, but the two easy hikes are gems of Alpine scenery, especially the circumnavigation of the lake at the dam.

You can also take the ski lift beside the hotel for expansive views of the Alps.

On returning to the Gosausee in 2009, the first visit in maybe 20 years, there were some striking changes. The Gosausee used to be fairly isolated. Where there once was a small parking lot, there are now one small parking lot and two big ones. Where there was once one ski lift, there is now a lift and a gondola. Where we used to eat dinner alone in the hotel dinning room, there now was a half full dinning room, and in the middle of September. Where the only hotel at the Gosausee used to be a bargain, it was now $150 for a double room, again, in what should be the “off season” (this leap in price is largely the fault of GW Bush's disastrous economic policies which drove the US dollar down to historic low values). Nevertheless, whether you stay here or not, this is one of a handful of sights in the Alps that no one should miss, especially in the late afternoon/early evening as the setting sun casts alpine glow on the summit of the mighty Dachstein.

We have traveled extensively in the Alps, and Gosausee would near the top of our list of the 5 or 10 best sights in the Alps. On further consideration, this is some of the best mountain scenery you will find anywhere.

Although it seems unnecessary to say it, you really must visit the Gosauseen in good weather.

Our favorite place to stay is the small hotel beside the dam and ski lift at the Vorderer Gosausee. Also in the area, we liked staying in Radstadt, an attractive little town for after dinner strolls, or Bad Ischl. Several new hotels have opened in the valley below the Gosausee in the village of Gosau since our last visit some 20 years ago. Most have rooms with good views of the Dachstein.

Don't worry about where to stay. Austrian hotels are of remarkably high standards. Take a look at the room. If you like it's looks, it will be fine. The state run star system (1-5 stars) is a pretty good guide to the level of luxury and price. The stars are on the hotel's nameplate near the door. There are a lot of small family run hotel/restaurants in Austria. This is where Europe vacations. Most of Austria's visitors come from other EU nations and there are so many that tourism accounts for 25% of Austria's economy. We make these places our first choice as they provide an authentic European experience. Look for a sign or literature saying some thing like “Fam. X” under the name of the Inn.

We always visit by car. I'm pretty sure there is a local bus from the nearby town of Gosau on Rt 166. Bus and maybe train service to Gosau probably starts from Bad Ischl.

Rt 166 or Rt 162 west of Gosau are beautiful drives across a lush green Alpine Valley, surrounded by the high Alps to the north-south expressway connecting Salzburg to the southern lake district.

Abtenau, on Rt 162 has lots of hotels and an attractive mountain setting.

Facing Gosausee from the parking lot at the end of the road, Hallstatt is just 5 miles away to your left. Go back to Rt 166, and turn right to loop around the mountain to Hallstatt (you will come to Hallstatt's underground parking lot before reaching the town at lake level. 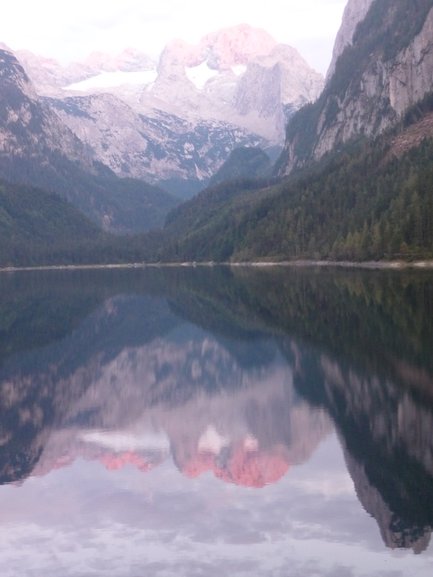 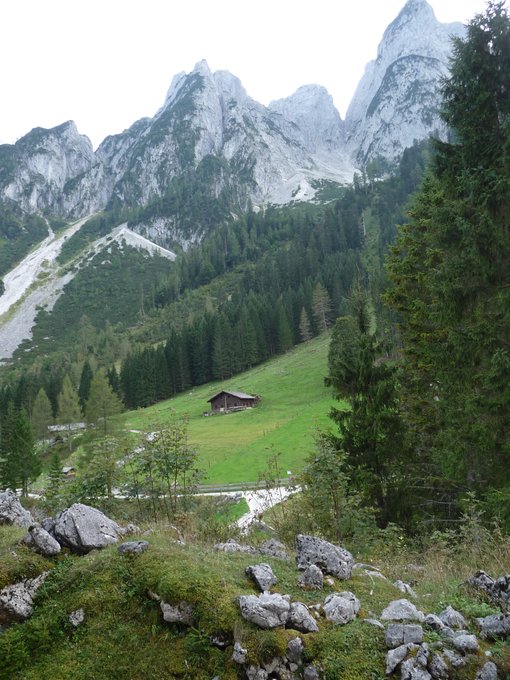 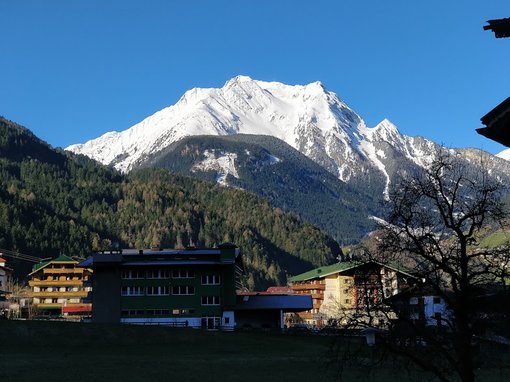 Snowtrip to Mayrhofen With (or Without) Your Dog