A suggestion from for History & Art fans!

The Ajuda National Palace is one of the most underrated museums in Lisbon. Crowds of tourists visit many historical points of Lisbon, missing the real treasure, what is this Palace.
In the first half of the 18th century, King João V planned to build a summer residence in the Ajuda Hill. The building of this Royal Palace in this place, however, would take place only after the Earthquake of 1755 which destroyed the royal residence, Paço da Ribeira (Ribeira Palace), at the Terreiro do Paço (Palace Public Square). On King José I 's initiative, the Royal Palace of Ajuda was built on the grounds acquired by his father firstly as a wooden building - commonly known as the Real Barraca (the Royal Hut). Wooden Palace was constantly completed and reconstructed and grew so much, that began to occupy an area larger than the area of the present Palace of Ajuda. In 1768, by order of Minister Pombal, the first Botanical garden of Lisbon with a magnificent collection of plants was laid out next to the Real Barraca. 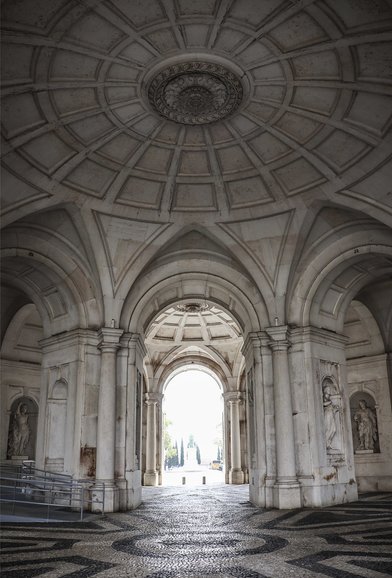 Palace of Ajuda, picture by Kotomi_

In November 1794, the Wooden Palace was destroyed by fire. The task of planning a new palace of stone and lime fell to Manuel Caetano de Sousa, an architect of public works, who designed it still in accordance with the Baroque architectural trends. This project was initiated in 1796 under Royal Prince Regent D.João and suspended after five years of construction when, in 1802 Francisco Xavier Fabri and José da Costa e Silva, followers of Neoclassicism, they criticized this very expensive project. Their opinions were conveyed to the King-Regent, who invited the architects to discuss and thus, to the joy of court intriguers, marked the beginning of a four-year war for a huge budget of new construction. This task, later taken up by António Francisco Rosa, responsible for the “reductive” design of the project, was never fully completed. Factors of a varied nature imparted a discontinuous rhythm to the building process, namely the Court’s departure to Brazil in 1807, following the Napoleonic invasions, as well as the continuing shortage of financial resources. In 1821 when the Court returned from Brazil the Palace was still unfinished and it only hosted formal official ceremonies. In 1826, after the death of King João VI (1767-1826), when the east and south wings were already inhabitable, his son Miguel chose it as Princess-Regent D. Maria residence. Clashes between liberals and absolutists plunged the country into a fragile stability, and in 1833 the construction was completely paralyzed. The following years the Palace fell into decay and became a sad monument to the great dreams that never came true. But in 1861, when Portugal lost the King - Pedro V died in the Palace of Nessesidades, officially from cholera, but there were persistent rumors of poisoning. The throne passed to his brother D. Luís. Young King didn`t want to stay in the palaces where the part of his family died, began to look for a new residence in Ajuda Palace. The Eastern facade was hastily repaired and finishing works were carried out in the North wing. Although the Western facade was never completed, the new king and his fifteen-year-old Queen moved to the Palace on 16 April 1862, making it the official Royal residence. For the first time since the beginning of construction, Ajuda became inhabited. D. Maria Pia tried to build her new residence: the king was tormenting his wife with endless infidelity, so she tried to super this fact spending the State Treasury - throughout the second half of the 19th century, the Palace interiors continued to be decorated, appeared new paintings and tapestries, were finished marble and parquet floors, was purchased an expensive furniture. The new layout and decor of the rooms, entrusted to architect Joaquim Possidónio Narciso da Silva, followed the recent standards of comfort, privacy and hygiene, typical of the 19th century bourgeois mentality. More intimate and sheltered spaces were now required. New rooms were introduced in the ground floor: the Dining Room, for daily family meals, a living room - the Blue Room - and leisure areas, such as the Marble Room and the Billiards Room; finally the bathrooms, provided with running water, hot and cold. The “Noble” Floor was reserved for gala receptions and the Ground Floor, extending from the Music Hall alongside the western façade, reserved for the private chambers. The Palace became the stage of Council of State meetings, of big gala events - banquets and official receptions - and of daily family life: Prince Carlos (1863-1908) and Prince Afonso (1865-1920) were born here. After the death of D. Luís I, new king of Portugal, Carlos moved to live in the Palace of Belém and Palace of Ajuda remained the residence of the Queen mother.

In 1910, when the Republic was established and the Royal family subsequently went into exile, the Palace was closed. In 1938, the Palace was turned into a Museum, but opened to the public only thirty years later. In 1954, the Palace was established Casa Forte (fortified room) for the storage and exhibition of the famous collection of Portuguese crown jewels and silverware belonging to the Royal family. The General public, these treasures were not shown, they can be seen only in the days of official events, which were held in'ajuda less and less. In 1968, the Palace housed the headquarters of the Ministry of culture of Portugal. Apart from being one of the most important museum institutions for the Decorative Arts in the country, the Ajuda National Palace is still today the stage of State ceremonial events.

One of the first neoclassical buildings in Lisbon, the Palace is a built in the shape of an irregular rectangle. The East and South wings are occupied by the Museum expositions of the Palace of Ajuda; the North wing belongs to the Institute of Museums (Instituto de Museus e Conservação) and the Institute of Cultural Heritage and Archaeology (Instituto de Gestão do Património Arquitectónico e Arqueológico). The main facade with a tympanum in the center and side towers on the sides is oriented to the East. 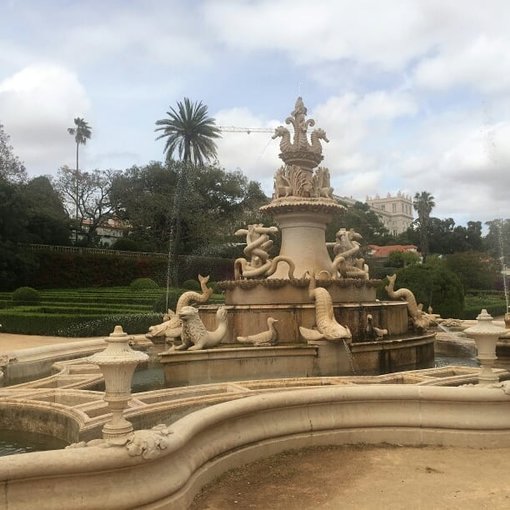