When the first Mormon EU invaders of of North America reached this large high mountain valley and built what is now Pipe Spring National Monument, the valley was lush high grass prairie, a landscape of grasses and wild flowers surrounded by mountains and higher plateaus on the Colorado Plateau.

The Mormon settlers realized this oasis of grass in otherwise largely barren southern Utah was an agricultural god send, and a great place to raise cows. So they did. They raised so many cows that the cows ate up all the plants on the tall grass prairie in just a a few decades. That was a problem, for it took Mother Nature hundreds of years to grow the prairie, and the natural cycle of scant rain and slow plant growth could not keep up with the destruction wrought by tens of thousands of hungry cows. The cows ate all the grass, and Nature could not bring it back. Instead, fast spreading sagebrush took over the vast valley floor, resulting an sage brush desert of no commercial or environmental value.

It took mankind thousands of years to destroy the once “fertile crescent” between the Tigris and Euphrates Rivers, but we did it one human lifetime at Pipe Spring National Monument.

The second reason to visit Pipe Spring National Monument is that it is a real early Wild West ranch. The image of the Wild West found in Hollywood movie versions of the Wild West is either fictional or based on long lasting, frequently remodeled ranches keeping up with the times. Pipe Spring National Monument looks more like a fort than the typical Hollywood ranch house because it was. Until the Europeans subjugated the Native Americans, early settlers in the Old West had to live in forts, not sprawling, open easy to attack and burn clapboard houses with big windows that would let flaming arrows fly in through..

Pipe Spring National Monument is not very far off the beaten tourist track. Its about 2 hrs by road from Las Vegas, 30 minutes from Kanab, UT, a major tourist center, especially for overseas visitors to the USA, as hour from the east entrance of Zion National Park, and lees than two hours from the North Rim of the Grand Canyon National Park. 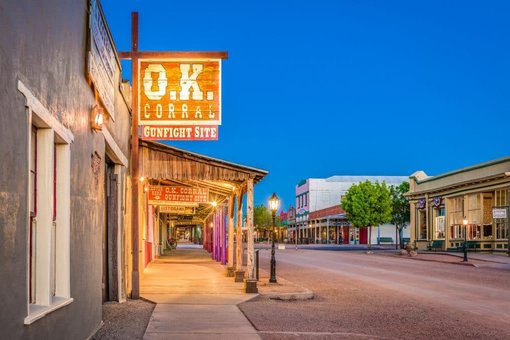 Tombstone Arizona Where the West Is Still Wild!