Visiting Melissani Cave, the Cave of The Nymphs

The light at the end of the tunnel

The tunnel leading to the lake is a dark, long, rectangular-shaped carpeted tube, but the aquamarine blues at the end glisten from a distance. Captivating me, this hurries me down the incline, legs outrunning torso as I eagerly make my descent. "Hold onto the rails, the floor is wet!" exclaims a male staff member. Whatever, at this point, I am way too excited to take any notice of the saturated floor, already exclaiming "wow" before I even reach. "You wait until you get there" he utters.

The history of Melissani Cave

Surrounded by thick forest and created through the dissolution of rocks, Melissani Cave was only rediscovered in 1951.

With a palpable mystique, it comes as no surprise that this shrine was a place of worship in Greek mythology - dedicated to one of the oldest Greek gods, Pan, God of the wild, and the Nymphs. Centred in nature, worship of Pan is often in grottos or caves. Nymphs, usually depicted as beautiful maidens and companions of the gods, are generally regarded as embodiments of nature, and typically tied to a specific place.

Local legend has it that a nymph called Melissanthe tragically committed suicide in the lake when god Pan rejected her love for him. 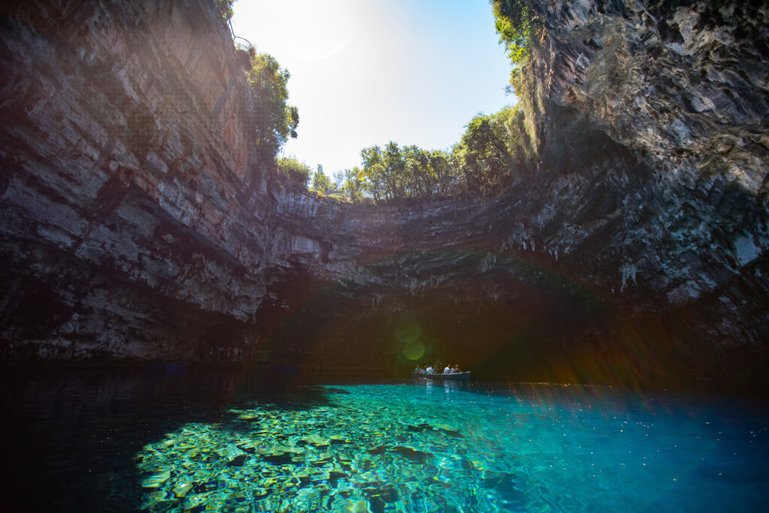 At the end of the tunnel, I am greeted by guides in rowing boats, awaiting tourists, of which there are few on this particular day (it is 2020 – say no more!).

The lake's waters are a hypnotic mixture of vibrant blues, and I repeatedly nod my head up, to the cavity in the roof, which is edged with forest green and back down to the water discerning any deception caused by the daylight above. The guide begins to row us onto the lake, and I note the varying hues of blue as well as a small school of the fish shimmying their way across the glass-clear seawater. The guide points out the stones at the very bottom, visible even at its highest depth of 30 metres. 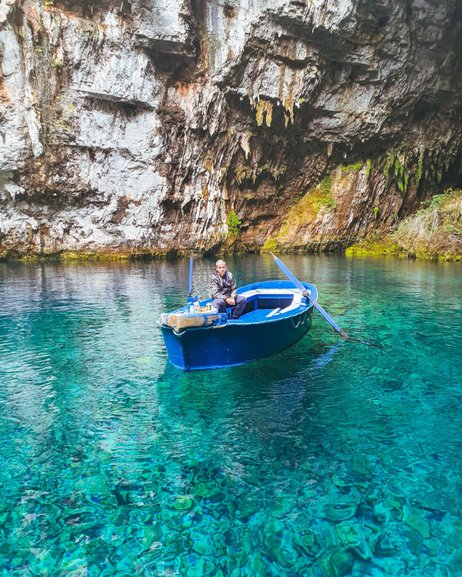 We make our way across the B-shaped cave from the large open area and approach an islet, separating the two chambers.

It is here that several artefacts from the 4th and 3rd century BC - a figurine of god Pan and a clay plate showing dancing nymphs - were discovered when excavated in 1962, indicative of a place of ritual. These finds are now on display at the Argostoli Archaeological Museum. 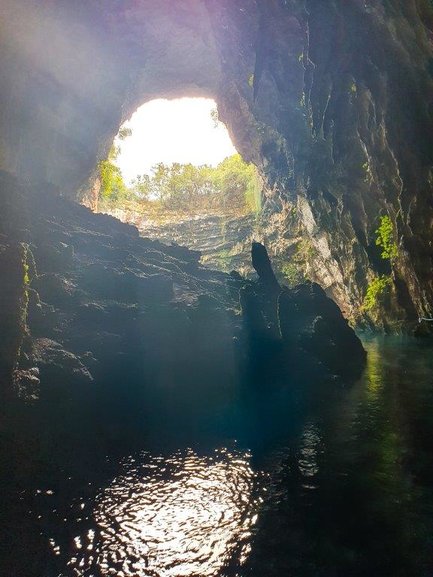 As we continue, the passage leading to the next room is so narrow that the guide stops rowing and uses the rope fastened against the wall as a handle to shuffle us through. The atmosphere changes significantly at this point. The second chamber is small, closed and dark. The curious display of bizarrely shaped stalactites above and the alluring azure waters below makes it both beautiful and eerie - perhaps, much like god Pan himself. My guide also points out the stalactites resemblance to dolphins, which play a significant role in Greek mythology.

Be the light you seek

As we make our way back into the main lagoon, the cave opens up and - like a light shining through a lampshade - the real showstopper happens as the sunlight, which is now directly over the crater in the roof, streaks straight through. The aquamarine waters create a magical illusion, as the sunlight bounces off of the water, illuminating the chamber with supernatural blues and the echoing droplets of water ricochet off of the lake's surface, making it even more captivating.

It is custom to tip the guide, and there is no possibility of me forgetting this, as he grabs some coins from his tip box and theatrically, throws them back in exclaiming: "thank you!" I find this hilarious. He deserves the tip, for his comedy element alone.

Visit the Palace of a Homeric King in Pylos

The Amazing Craters of Didyma