Not the Usual Greek Island Cruise 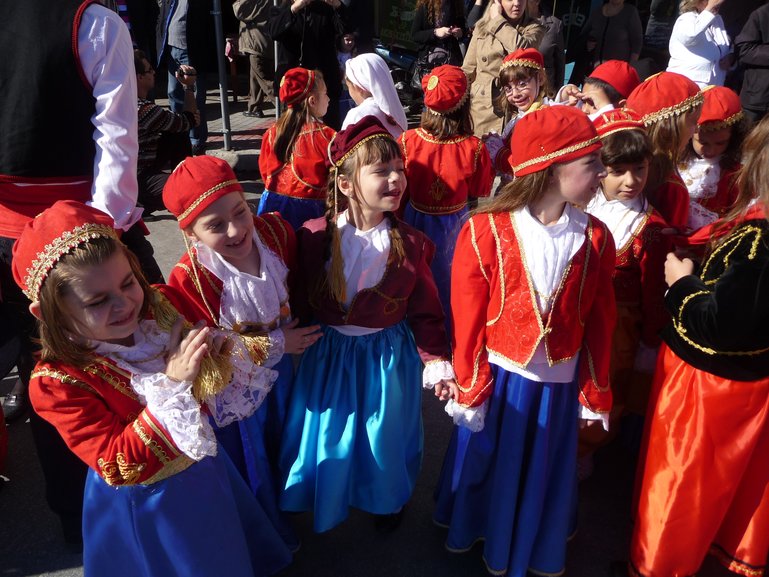 Its a convoluted story but the noun lesbian derives from the ancient name of the inhabitants of Lesbos. Did we see any lesbians on Lesbos? How would we know? What we did see an Lesbos was a lot of fun. We declined to purchase any of Oceania's over priced shore tours, preferring to take our sightseeing chances on our own, and hit the jackpot. I can't say for sure that Oceania scheduled the cruise for this, but we hit Lesbos on Greece's National Day, which calls for a big parade, and Lesbos delivered.

Mytilene is the capital of Lesbos and Mytilene is where our cruise ship docked. The Mytilene harbor is small and U shaped. We docked at the end of one arm of the U. The Big Parade was on the other side. We did not know about the Big Parade until we stumbled on it. We started our day exploring the part of the old city of Mytilene that was on our side of the U shaped harbor. It was a most pleasant stroll through the old town. There was an attractive church. Then we headed across to the other side of the harbor, and went to see the guide book recommenced old church on that side of the harbor-- definitely worth a visit should you find yourself in Mytilene.

The main part of town is across the harbor waters from where the cruise ships dock, so we started out for it, but along the way, we first explored the oldest part of Mytilene which is just inland from the dock. There are some old Ottoman houses left, and a couple really old churches, all which we saw as we worked our way around the harbor. On reaching the other side, we headed inland to the main part of town where we saw some attractive neighborhoods and an interesting old church, and then we headed back to the harbor, with perfect timing to catch the big parade.

Two kinds of people live in Mytilene, those who are in the Big Parade and those who watch the Big Parade. Those who watch the big parade are the relatives of those in the big parade. We got back to the harbor road just as the Big Parade was forming up. Before the Big Parade started, the line up of marchers in the Big Parade occupied about one quarter of the road around the harbor. As we walked down the street, it became clear that the Big Parade included 1, 000 years of Greek fashions, all represented by the various participants in the Big Parade. When the parade started, some locals quickly shuffled around making space for us right at the front of the crowd lining the parade route. Although language prohibited talking with the locals, it was clear they thought it was much fun to have some foreigners joining in to watch the Big Parade. We paid them back for their hospitality by sitting town on the curb instead standing at the front of the crowd. At least that's how we hoped the locals took it. The reality was our feet were tired and we needed a sit down. But whatever, a ground level unobstructed view was just the thing for watching the Big Parade. We think it was Ochi Day also spelled Ohi Day or Oxi Day. Ochi etc is Greek for"no". Ochi Day was when Greece said "no" to joining the Axis powers in WWII, which would also help explain all the military in the parade, but to us foreigners it looked like a big historic fashion show. The Big Parade went on and on, mostly because it seemed that every school kids on Lesbos was in the parade, many wearing historic costumes, some wearing their school uniforms, but what ever, a rare treat for a tourist.

Back to the ship for lunch, and then up the hill on the ship side of the harbor to the local small but excellent local museum which turned out to have an excellent collection of ancient Greek and Roman stuff, but the highlight was a collection of well preserved Roman mosaic floors from Roman villas in Lesbos during the time of the Roman Empire. Continuing up the hill after the museum. brings you to the big fort, Viennese, Greek, Roman, and Ottoman ruins of more or less detail scattered around inside the walls of an unusually spacious fort/castle, as these go in the EU. 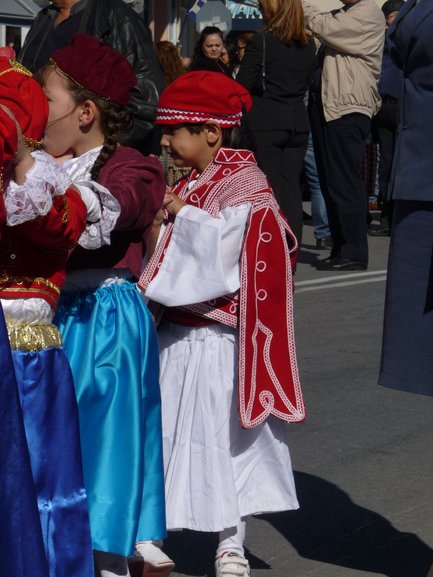 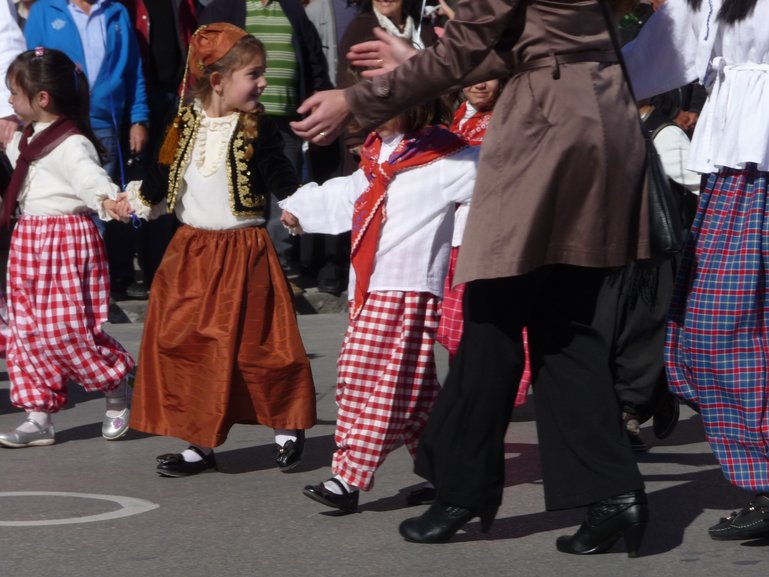 I'm not sure why our Oceania cruise ship stopped at Corfu. Perhaps for its famous beaches, but November was not beach weather, yet there we were. In pre-trip planning, I studied lots of travel advice sources but couldn't find anything to go see That justified the inflated prices of Oceania's shore excursions. So, we fell back on our standby-- go walk around the old town and hope to find some streets of interest. We did, and there were, but Corfu is far cry from Prague.

The guide books did list one interesting sight not too far out of town That we did go to see because it was an easy short bus ride from the town square. There is a very little island very close to shore, so close there is now a short causeway for visitors to walk out to the island, and a little church occupies almost all the above water part of the island-- a very attractive setting.

The parts of Corfu city That are interest to the tourist are the town square/town park area, the two Venetian forts, and the older city, far the most interesting, but all That interesting. nevertheless, if you are stuck it Corfu, it makes for an OK day. There are some two bit palaces, some two bit churches, and some two bit forts, all connected by a warren of moderately interesting streets. We did get some really good prices at a little grocery store on thyme, oregano, and pink peppercorns.
To find the most interesting part of town, imagine a line connecting the Old and New Venetian forts. Facing the Old Venetian fort, the old town is to the left of That line, a reasonable walk from the ship dock.

The most important and most interesting city on Crete is Heracklion. the capital city with an impressive museum of Minoan relics. Oceania did not dock an Heracklion. Oceania docked at, which turned out to be even less interesting than Corfu. But one goes to Crete to see the ancient ruins of the Minoan empire. Knossos, is the largest Bronze Age archaeological site in Europe and is thought to be Europe's oldest city, dating back to 2700 B. C. We took Oceania's shore tour to Knossos. Knossos was both the capital city of the Minoan world and also the ruler's palace. If Knossos is the model for cities of that time, there was no difference between a towns and a house- all the houses are connected to from one big city sized structure. The king has dozens of rooms, Joe the blacksmith has maybe two rooms, but Joe and the King lived just down the hall or up the stairs from each other. The palace city was home to more than residences. Large warehouses are part of the palace where stores of wine, water, and grains were kept.

While the tour guide might have told us this, I don't think so. I'm pretty sure I read it in a magazine article on the architecture of Knossos. The place is situated on the side of valley in such a way That it is air conditioned by natural breezes. Close to the sea and between the sea and the mountain spine of the island, there is a reliable daily cycle of sea and land breezes being such so That the coolest directional breeze is always blowing into the Palace. The King's and Queen's rooms are ideally situated to take advantage of the natural breeze pattern.

I found the last segment of the tour of the palace to be the most interesting to see, and it took some hustle to explore it as time was running out to go back to the bus.

Our cruise docked at Ayios Nikolaos (Cyprus), a much smaller port than Heracklion, but in a more attractive setting. After a morning bus trip and tour of Knossos and lunch on board, we set out to explore Ayios Nikolaos. A couple hours was sufficient. Although a feeble second by reputation to the Archeological Museum in Heracklion, there was supposed to be a respectable Archeological Museum in Ayios Nikolaos. First, we headed toward the Archeological Museum. It was closed. On the way, we passed by the lower shore of what was at least once a fresh water lake right in the middle of town that now has a short channel connecting it to the sea. Looking inland, a cliff rises behind the nearby far shore of the little lake. Form the closed museum, we headed uphill on the street bordering the closest side of the lake which took us into the commercial district after we walked along the road at the top of the cliff above the lake-- good views out over the lake, the harbor, and the bay... We visited a couple minor but attractive churches, did some shopping, and headed back downhill toward the ship. Walking down the main street of the town, When we reached shore level in the middle of the tourist bar and restaurant zone, active even in November, but the nearby small beach wasn't. I noticed that restaurant menu prices were noticeably higher here than high up the hill in the commercial down town. 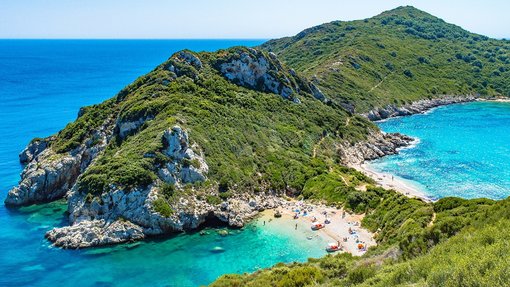 Top Things to See and Do in Corfu, Greece 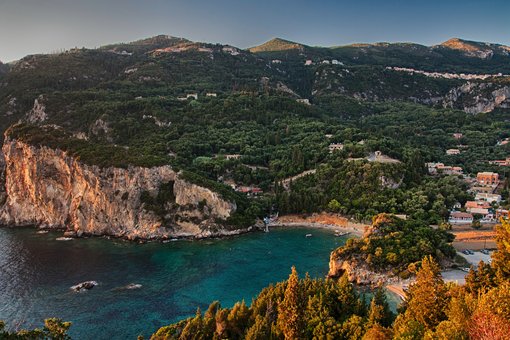 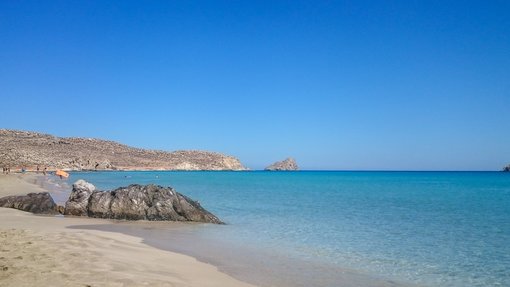