As someone who is still learning the German language, I was quick to assume that an S-Bahn was short for Straßenbahn (or Tram)!! But to my big surprise, the Germans call a tram, well... a tram !! The S-Bahn is actually short for Stadt Bahn (City Train) that runs with the other Regional Trains. This knowledge is all that took to get me excited to go on this train with a different name, and hence got me searching for a stop I could reach on a S-Bahn.
And I thus found the UNESCO heritage town of Bamberg, and am I glad I did!!!
Wondering what we did in 1 day to make the most of our trip and see all the beautiful attractions in Bamberg? Read on...

The Old Town of Bamberg, like most Bavarian Old Towns can be explored in a day and is studded with beautiful architecture and photographic streets. You might need another day to visit a little off-city limits destinations like The Seehof Palace and Altenburg !!!

Since we pulled this stunt at the ease of Lockdown, some of the attractions were close for tourist entry, and hence we managed to hitch a ride to Seehof Palace.
And inspite of so many closed doors, we have zero regrets in visiting the Frankonian Rome and here's why :

The symbol of the Bamberg old town and one of its most iconic buildings, stand erected on the Regnitz. Half timbered and beautiful, there is an interesting story behind how it came into being which goes like this :

The Bishop of Bamberg did not want to give up any of his land to the citizens for the construction of a town hall and hence the citizens pounded stakes in the Regnitz and thus created an artificial island on which they built their town hall.
Inside, the Ludwig Porcelain Collection is on display and is one of the largest of its kind in Europe.

Located directly behind the Town Hall, this Wedgwood Blue house sits on the bank of the Regnitz River and was the birth place of Joseph Heller, a local businessman, historian and art collector. This Rococo style building in blue and white is an Instagram spot you wouldn't want to miss!!! 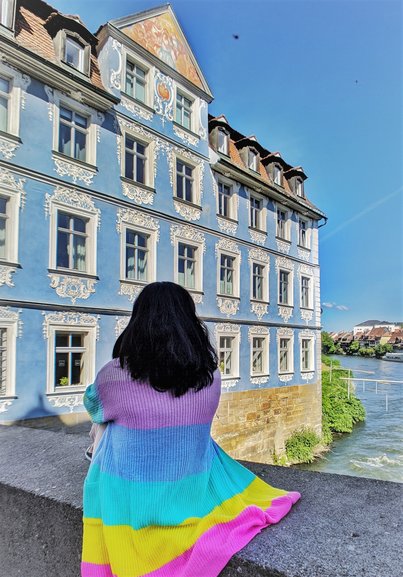 Completed in the 13th century (after the first two cathedrals burnt down in the 11th and 12th centuries), the cathedral is under the administration of the Roman Catholic Church and is the seat of the Archbishop of Bamberg. Since 1993, the cathedral has been part of the UNESCO World Heritage Site "Town of Bamberg".
It was founded in 1002 by King Henry II and consecrated in 1012, a late Romanesque building with four huge towers.
A few of the cathedral's most famous holdings include an equestrian statue known as the Bamberg Horseman (Der Bamberger Reiter). This statue, possibly depicting the Hungarian king Stephen I, most likely dates to the period from 1225 to 1237. 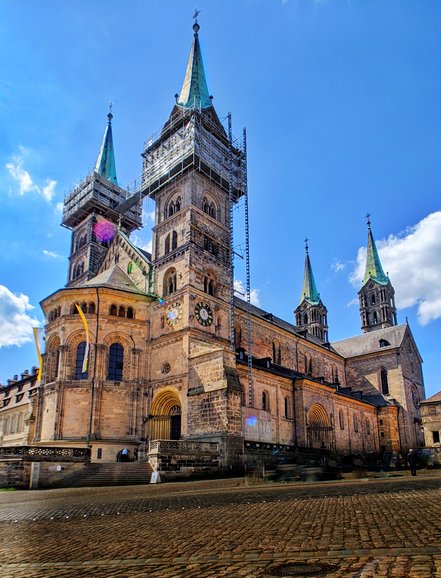 There is also the marble tomb of the founder and his wife, the Empress Kunigunde, carved between 1499 and 1513.
It also houses the tomb of Pope Clement II (1005–47) , which is the only tomb of a Pope in Germany. It is made from silver-grey marble with carved reliefs from the first half of the 13th century on all four sides: the four Cardinal virtues, death of the pope and St. Michael, rivers of paradise, and John the Baptist.

What served as the seat of Bamberg'a Prince Bishops until 1802, is now a museum and gallery (which was unfortunately closed at the time of our visit). It apparently has splendid rooms and lavish furnishings that are an impressive reflection of the prince-bishops' life. The state gallery contains a significant collection of old German and baroque paintings. 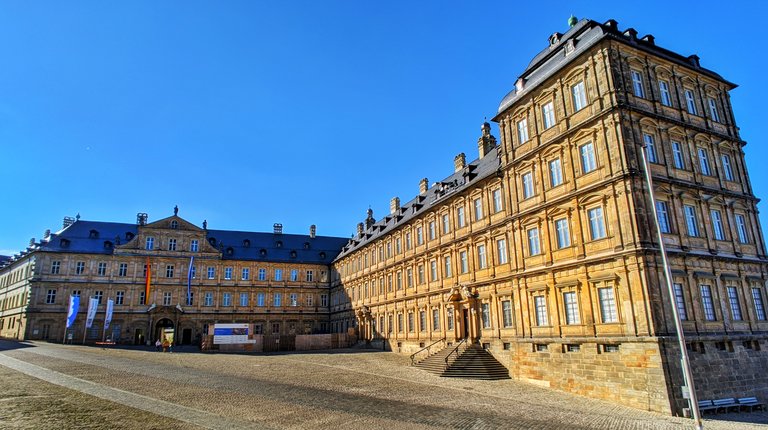 The garden of the New Residence is as beautiful as the name suggests. Offering a panoramic view over the city and its own little cafe, this is an interesting choice for a relaxing evening!!!

6. The Historisches Museum and Old Court

It consists of former residential and farm buildings of the episcopal court, which were built from the 15th century on the site of the Palatinate of Emperor Henry II.
It probably also included the bishop's residence since the diocese was founded in 1007.

Today it is the city's historical museum and the cathedral building hut in the Henneberg winghouse. 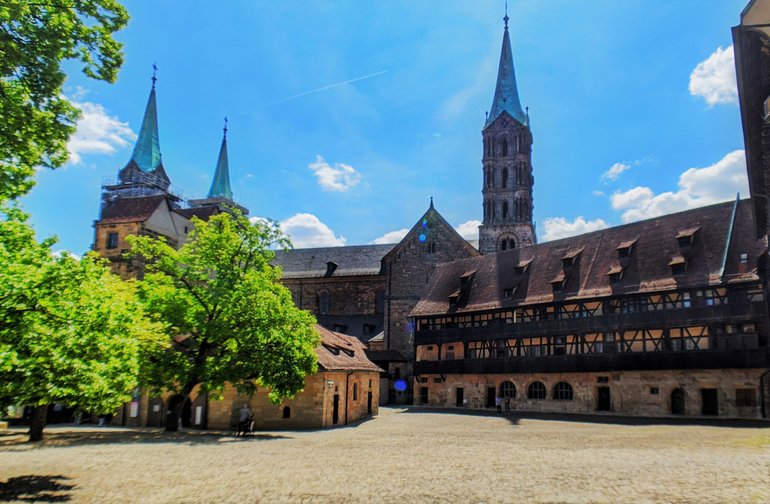 This is also the place you will find toilets (in case you ever wonder; which you can use for 50cents) and plenty of shade and seating.

Pro tip : In summer, the Calderon Festival takes place in the courtyard.

After walking up the hill of Michaelsberg (one of the seven hills that Bamberg extends over) we finally reached the former Benedictine Monastery, founded on the initiative of Emperor Heinrich II, in 1015. Today its imposing baroque style architecture cannot fail to impress.
Another highlight on Michaelsberg is the church garden (called celestial garden), featuring 578 flowers and herbs. The terrace behind the church commands a panoramic view of the city and it's honestly well worth strolling through the baroque terraced gardens, that even features a fountain.

You can also find a couple of eateries in case all that climbing got your hunger pangs blazing:)

Another highlight in the Old Town, this one honestly looks really unassuming on the outside.The Church of Our Lady or Upper Parish is a Gothic Catholic parish church, with its first mentions found in an undated document from the time of Bishop of Bamberg Egilbert (1139-1146).
The church got the popular name Upper Parish because of its location on the Kaulberg and since the 13th century has been an upper parish of the cathedral chapter. 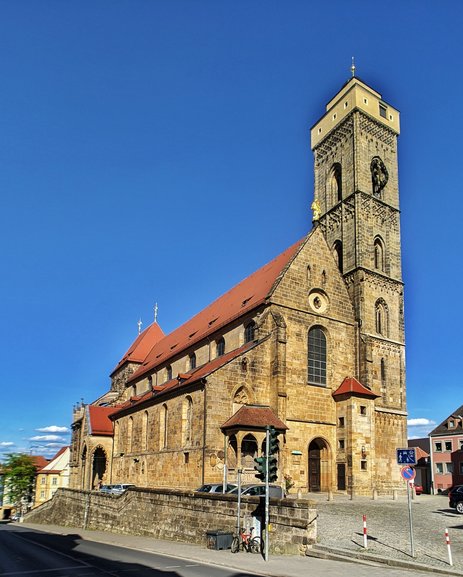 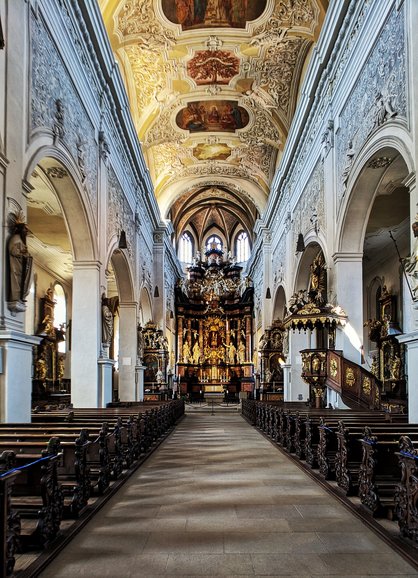 With beautiful interiors and a peaceful silence, this is a stop we absolutely loved:)

The Altstadt of Bamberg, has the Regnitz through it, and has many bridges spanning it, connecting the two halves. 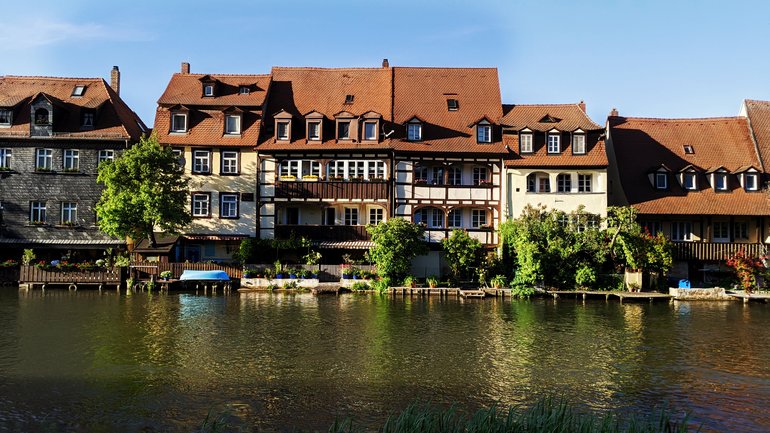 Kleinen Venedig (Little Venice) is the name of a former fishing settlement in Bamberg which consists of a series of old 17th-century houses located directly on the eastern bank of the Regnitz. It forms the backdrop for the fishermen's prick at the so-called Sandkerwa (Sandkirchweih), Bamberg's largest folk festival in August .

Visit here for a quiet evening and some people watching... 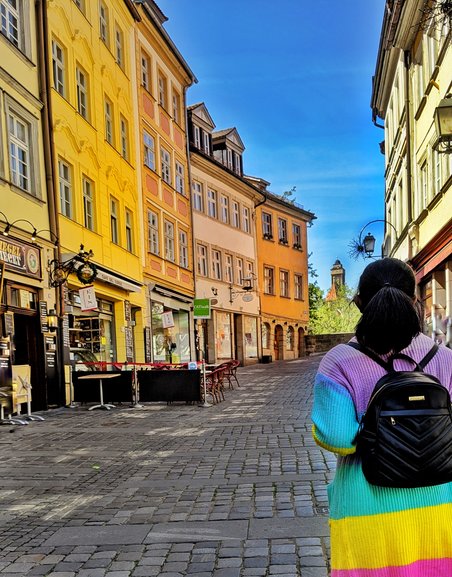 This colourful street behind the Rathaus is a good idea to visit when in Bamberg! Lined with eateries and some boutiques, this is also the place you will find your souvenirs. 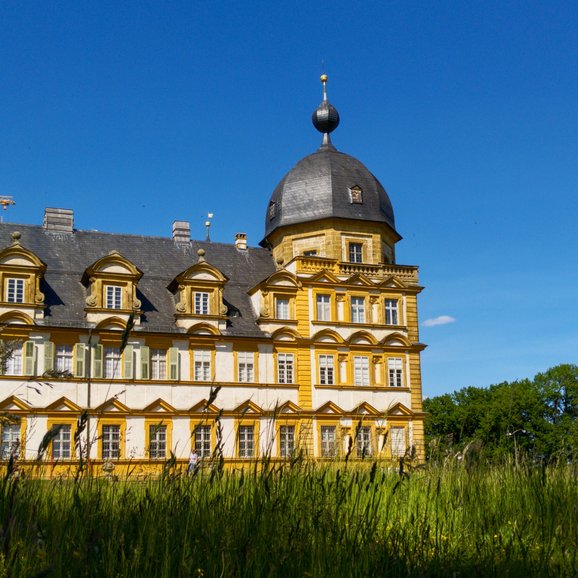 Located on the outskirts of Bamberg, we got on a bus that took us to the summer residence for the Bamberg Prince-Bishops that was built in 1686 from plans by Antonio Petrini. The splendour of the marvelous rococo garden and the restored cascade with its water waterworks and the sculptures by Ferdinand Tietz are things to indeed behold!!!
The nine state rooms of the restored Prince-Bishops' apartment, including the "White Hall" with its magnificent ceiling painting by Guiseppe Appiani, are open to the public.
Most of the palace is today used by the Bavarian State Conservation Office.

PS: These photos do no justice to the sheer beauty of this magnificent building, however we couldn't get any better ones , due to the ongoing construction works at the time of our visit!!

The waterworks are scheduled every hour on the hour from 10am - 5pm in Summer. 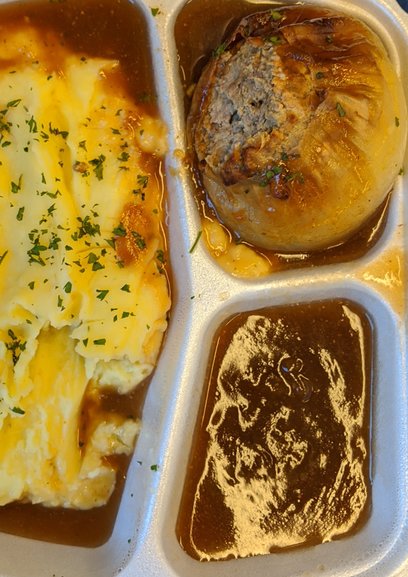 Well last but never the least, you have to (I mean haaaaveee tooo!!!) try the smoked beer (Rauchbier), which is a dark beer with the aftertaste of Bacon (or so we felt) that's served chilled and the Bamberger Zwiebel (another Bamberger specialty where onion is cooked stuffed with minced meat and is served with mashed potatoes and bier sauce!!!)
It really is worth the try and it was actually the thing we loved the most from our visit *burp*

Another attraction located next to the Bamberger Cathedral is also a good visit.

If you have time to spare, a trip to Altenburg, that lies just outside of Bamberg, is much recommended (or so we are told, we unfortunately didn't have enough time in one day to visit all of these attractions, and the photos looked really promising too), so do let us know if you make a visit there...

Hope these tips help you have an amazing trip in Bamberg :)

A big hello from Vishi and Roh! We are travel lovers and doctors, and most of our travels include Mini Vacays and Weekend Getaways! Here’s sharing our travel stories from our short trips!! ‘Making the most of Little’, is our mantra to follow our dreams! We run our travel blog "Compass Misrouted"and we have been exploring the world together for the last one year. Like we told you, we are not full time bloggers , but we love travel and all the experiences that come with them. We travel to rejuvenate ourselves, to escape from the everyday mundane and come back home and to work, with a fresh mind with new ideas. Oh we do love our job... Read more

Enjoy the views of the beautiful Montenegrin Riviera! This 4-hour tour will take you from Kotor to Budva and back.